I'm working on an alternate future setting (somewhere between 2070 and 2130) in which Southern/South Western Ontario, specifically the London, ON area, becomes a tech powerhouse on par with Silicon Valley.

Unfortunately, I've made the classic blunder of coming up with an effect without considering its cause first. I've decided that somehow this new tech powerhouse affects the population of New York City (est. ~10m in this future), dropping it quite dramatically to almost half that (somewhere around 6-7m).

When I came up with this "effect" I decided that the population change happened over the course of a few decades, but that might not be a realistic time frame, and I'm flexible on that.

I've considered possibilities such as New Yorkers emigrating to Canada's new Silicon Valley, but 3-4m immigrants from the same city over the course of a few decades seems like something that would cause Canada to heavily tighten immigration requirements.

I've also considered slightly hand-wavey solutions, such as a plague, or other such disaster, striking NYC and causing the city to be so undesirable that it triggers mass emigration. I dismissed these solutions because they seem very Ex Machina-esque, I'd prefer a solution more rooted in viable politics.

What event, political problem, or other feasible happening could cause such a population shift?

Well the population loss in New York need not be only from people migrating to the new hub, some of it could be people leaving New York in search of perceived better opportunities elsewhere. To trigger such migration on this sort of scale though would likely require dealing a crippling blow to New York's economy. One aspect in your favour in accomplishing this is that New York's economy is heavily dependent on the financial sector the lifeblood of which is a highly mobile resource namely capital.

So it seems to me that what you would need is to have the development of the new tech hub set in motion a chain of events that results in large scale capital migration away from New York, such capital flight is really bad for a financial centre like New York. The problem you have here is that normally one would expect New York to position itself as far as possible to capitalise on the new tech hub becoming the de facto go to place to funnel the venture capital and other investment through.

Sadly the most likely prospect of circumventing that is also rather boring since the only real influence with this kind of power to distort the market is government regulation. This could be the US government shooting itself in the foot by introducing regulatory overburden that renders their financial centre less competitive globally. Or perhaps Canada moving to foster a more attractive regulatory environment that encourages a boom in the financial and service sectors including tech startups etc.

The latter probably makes more sense here as it would go along with being the trigger that ultimately lead to the rapidly booming tech hub in London, ON too. Think things like lowered taxes, streamlining regulations and reducing red tape or artificial roadblocks that put up barriers to entry for entrepreneurs etc.

It could also be some combination of good regulatory strategy on Canada's part and missteps on the part of the US. In fact I could imagine misguided efforts by the US legislature to put up protectionist barriers in an attempt to prevent capital flight actually making things worse due to a failure to fully understand the industry they are attempting to regulate, this would be far from the first time a legislature made this sort of mistake.

There's no reason why it would

It may even help New York. NY is a financial centre, Silicon Valley is a tech centre. When Silicon Valley grows, the share prices increase and Wall Street makes more money. There's no reason to think that another tech centre with a tendency to list their stocks on the NY exchange will cause any harm to the city. Quite the contrary. You're not competing in the same market, tech people and financial people are worlds apart. If you don't work in/with tech there's no reason at all to go to Silicon Valley.

Now if Canada's rules said that these companies must list on the Toronto stock exchange and your new tech centre did displace Silicon Valley as the heart of the global industry, then you might start doing damage to New York, but not by sucking people into your new zone but rather from NY to Toronto.

It probably is not enough to have just a tech area as such. You would need some other factors that draw all kinds of economic activity. Redmond, Washington, where Microsoft's head office is located, is not a gigantic city and probably won't require millions of people for tech activities. These sorts of things require specific skills in a significant but not enormous work force. We are talking 10's of thousands, maybe 100's of thousands.

To get millions to move there you need something that drives an entire economy. Even a single resource such as oil won't result in millions of people moving there. Alberta, Canada, is quite rich in oil, but is still fairly modest in terms of population.

I can think of an example, but it's probably not directly helpful to you. In 1980 the city of Shenzhen China (to be called SZ from here), was a town of round-about 60,000 people. It existed primarily as a port city, and to service the border with Hong Kong, which is across a very narrow section of water directly south of SZ. Then SZ was made a special economic zone. That meant people could be business owners, make money, and get rich. So there was very suddenly a huge draw to move there, and today it is more than 12 million. And growing basically as fast as the country's government permits, and apartment construction allows.

SZ has every sort of industry. Manufacturing of all kinds, finance, import/export, entertainment, etc. and etc. It is very strong in electronics manufacture, but it is also strong in many other industries.

So you need some factor, or collection of factors, that allow an entire economy to flourish in comparison to the places that population migrates from.

In addition, you need some conditions that mean the source location is specifically unattractive. That is, NYC would have to be relatively unpleasant or undesirable for some reason. Otherwise, the attractive place would attract people from much larger zones. In SZ, people arrive from all over China, not just one nearby city. South Western Ontario would draw from Detroit and Chicago. And also other parts of Canada. Not just NYC.

Maybe in your scenario, NYC has become tyrannical in some way, and Ontario is then a place people can become wealthy.

Interestingly, if a city starts losing population over this time scale, it can become a cascade failure. For example, if an area loses population then the sewer system may not have enough flow to keep things functioning. And entire neighborhoods can become uninhabitable. Other things like police, ambulance, and fire department can fail when population falls abruptly. Google up some of the events around Detroit losing population to see examples of some of these things. 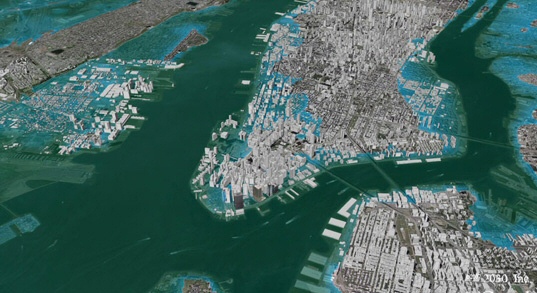 Not just New York, but much of the Eastern seaboard is threatened by sea level rise. People will have to move and moving inland makes sense. If the part of Canada you use for your story already has established socioeconomic policies appreciated by the liberal elites on the East coast (because the Canucks established such policies to draw liberal elite tech masters from the West coast!), the Easterners would migrate there as well to leave drowning NYC and Boston.

Anti-immigration crackdown in US.

To depopulate major metropolitan area, it's not enough to create a "pull" elsewhere, we would need a "push" from that area itself.

New York City, with over 3 million of its inhabitants born in another country, is currently the most "immigrant" city in the world. Immigrants are drawn in by its thriving multiethnic communities as well as abundant opportunities for work and business. Immigration enforcement is restrained by the liberal city policies.

Once anti-immigrant policies in the city would prevail, it would quickly turn from population magnet to a place where any immigrant would fear for him/herself and the family.

At the same time, Canada, which is already immigration-friendly, may expand its policies and offer new opportunities to former US immigrants. Over a few decades, New York may turn from thriving, very diverse city to a shadow if its former self. Coupled with capital flight from US to Canada (discussed in other answers), this would provide no incentive to anyone to stay in NYC. Mission accomplished :)

Not the answer you're looking for? Browse other questions tagged politics near-future population geopolitics .

9
How might a colony treat the arrival of a new generation ship?