How to hide an urban landmark?

The Third Reich must destroy the Notre-Dame de Paris, and the inhabitants must prevent this.

The French do not have access to anti-air weaponry (non-weaponry defences are permitted), the Third Reich has bombers.

Due to sabotage efforts and the primitive nature of maps in this alternate world, the Third Reich has no useful maps of the city. Instead, the pilots have been trained to recognise the cathedral based on tourist photography.

Can the citizenry, together with help from the Allies, prevent the bombers from spotting the cathedral?

A week may pass before the first bombers arrive, and anti-air weaponry will be available within two weeks of the first arrivals.

During WWII the city of Alexandria, in Egypt, was under menace of being bombed by the German bombers.

Since it was known that the bombing would have taken place overnight, it was decided to build in the desert an exact replica of Alexandria's light pattern, and enforce a strict curfew in the real city.

When the German bombers spotted the city lights, they decided that their instruments were giving the wrong reading, and successfully bombed the dunes. (source)

You can use a similar approach. Build a decoy in an expendable location.

As described, the French lose

Ok, we have pilots that have no suitable airmap. What do they do? They launch some planes and start to map the city at once. As there is no anti-air available for the French, they can fly over the city and make photos. How? Because Paris is well within the 2000 km range of the Germans Ardo AR 235 even if they would launch their recon Aircrafts in eastern Prussia! Assuming they launch in Cologne 400 km away, the French have not one week but 30 minutes before the first recon-bomber is over Notre Dame and will start to map the area. After two hours of uninterrupted photography (again, no anti-air), it turns around and lands 30 minutes later. Two hours after the landing, the High Command is not only in possession of aerial photos of all of Paris, they also are just hours away from having the best map of Paris that ever existed, showing the exact location of Notre Dame and any attempt to cover it up. Making a rough map with the river and the location of all the churches is a manner of hours now. How do they look? Well, this is a REAL aerial photo of 1943: 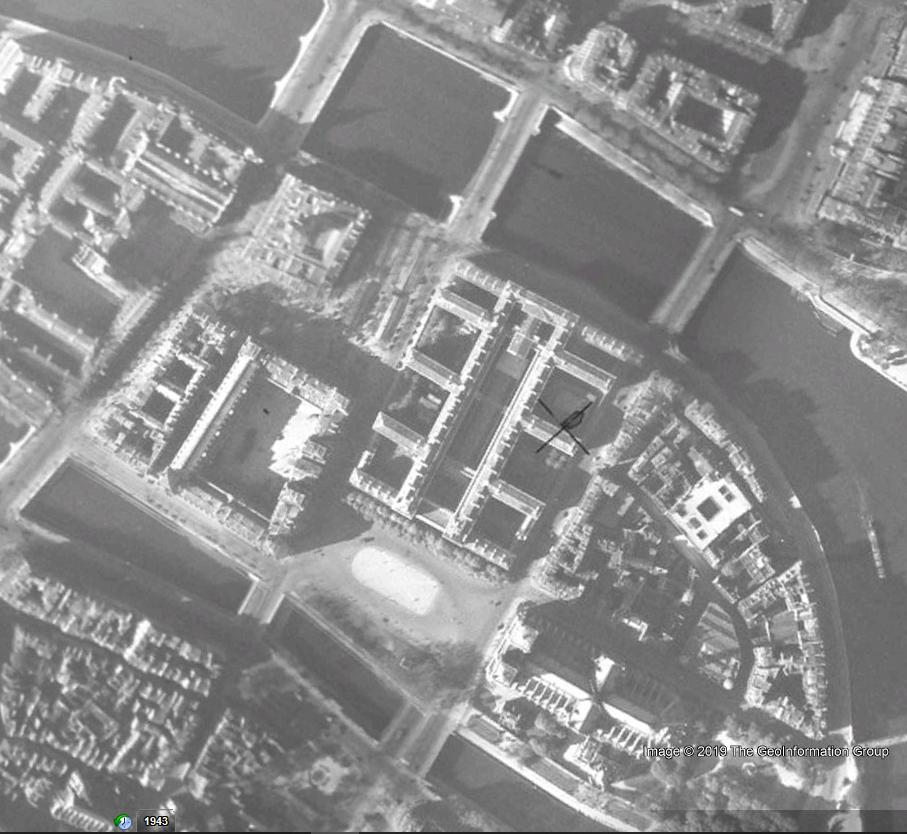 The next morning the air bombing can and will start, six days ahead of the plans of the Parisians, no longer stopped by lacking maps.

"A week may pass before the first bombers arrive, and anti-air weaponry will be available within two weeks of the first arrivals." - OP

As established already, the one week time to prepare the defense is a vast overestimation by the French and only feasible if the Luftwaffe has some odd lack of bombs available and needs to reroute or acquire extra bombs from other battlefields to crush Paris. Anyway, the Luftwaffe has total air dominance for two to three weeks.

Without an anti-aircraft supplement in place, now there is little to nothing the French can do between Ardo's taking photos and mapping the city and dropping occasional bombs. With the lack of any air defense, once the bombers come, there is nothing to keep the bombers away from the town and use daylight to aid in their bombing. As a result, the bombers come in broad daylight and can use the Seine and other buildings alone to estimate where to bomb to hit the one building they are interested in. See the large park north (Les Jardines des Halles) and the block of houses next to the park (Jardin des Plantes) SE? Notre Dame is where a line south from the park's east side would meet the elongation of the north wall of the university. It's in the elongation of the eastern island's edge between the first and second bridge on the second. Making a good aerial description of the target area is trivial once the photos were made.

Or they could just go to indiscriminate bombing of the inner city islands, leveling everything: Even the most useless map made from tourist photos shows that the cathedral stands on the south-eastern corner of an island, and bombing the whole island into smithereens would surely also hit that area. Hell, even with just tourist guides to guide the pilots, they might fathom a simple map: the guides and history books tell of other related landmarks like the smaller Saint Chapelle (yellow) 440 meters to the East-North-East, right next to the Palais de la Justice (green). And that Notre Dame is directly next to the huge complex of the Hôtel-Dieu de Paris (blue). 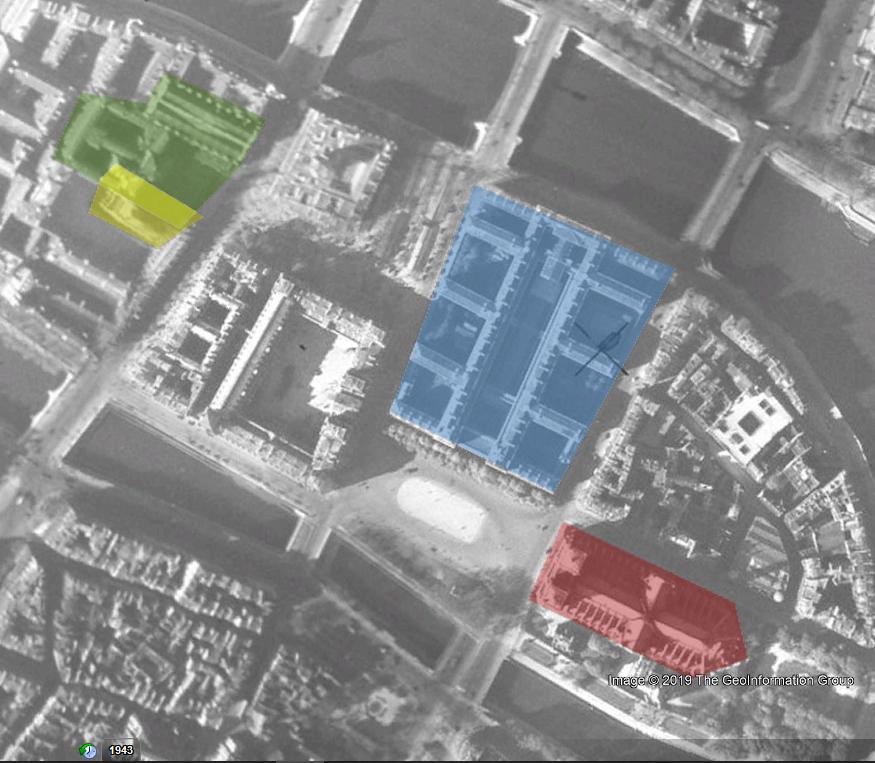 And here with more area around to show how distinct the area is: 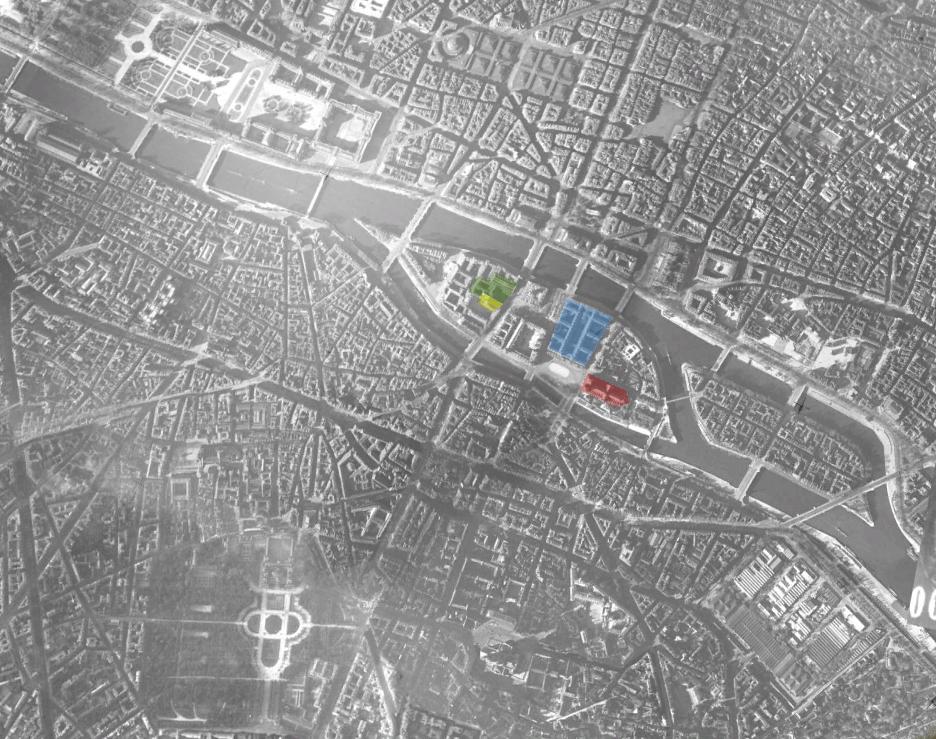 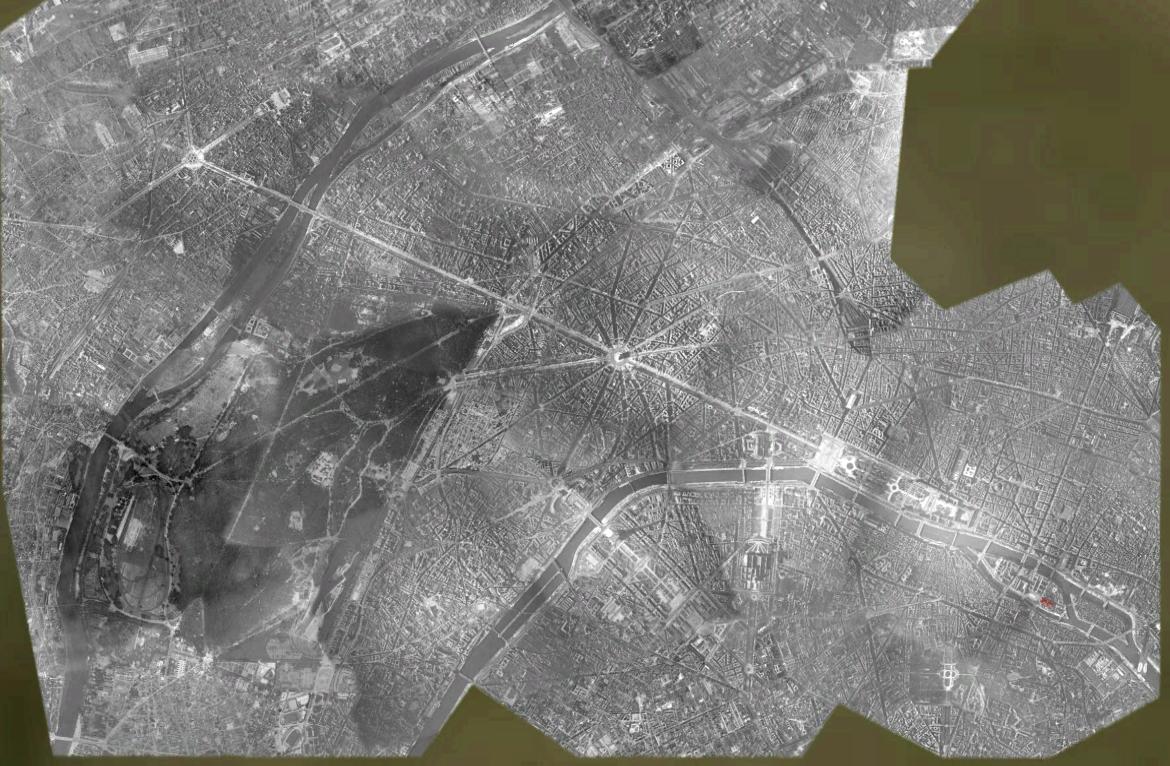 Disguising or protecting Notre Dame is not an option anymore at this point.

Having no chance to cover up their Lady, the French have only one option left in the short hours: Deny their enemy the victory of destroying the church by evacuating everything from it they can and then destroying it themselves. There is no chance they can hide or protect an area about 1000 by 300 meters that is - conveniently for air attacks - right in the middle of a river.

Short of leveling the whole island and filling in the river, nothing can permanently disguise the position of Notre Dame. And nothing short of burning Paris to the ground can temporarily cover the whole city in so much smoke that it blocks aerial photography. 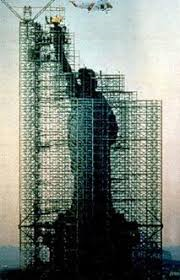 Hide the thing pilots could know where Notre Dame should be. The islands. Bomb operator didn't looked at maps. They looked at ground below them. So the pilot would go along the river and bombardier would open the hatch when he would spot the first island. So just cover one canal with fake buildings and create fake one earlier alongside river.

Cause a great fire and use the smoke to obscure the target.

Potential problems with this strategy would be:

Strategically, it's highly unlikely that the Luftwaffe would want to bomb Notre Dame anyway. Landmarks offered pilots a critical advantage that is so obvious, it's in the name: They Mark the Land. With nothing to support actual location pinpointing, a key strategy in World War II was to spare certain parts of the city so they could find the more strategic parts of the city.

When the allies were bombing Munich, pilots and Bombadiers were under very strict orders to not bomb exactly four buildings in the central part of the city (at least one was a church). Through out the entire war, only one plane damaged the four buildings, and that was because these buildings were easily identified from the air, and configured in a square shape... If they remained standing, allied planes could approach Munich and use the four structures as a compass rose that guided them to the more important factories and infrastructure necessary to the war effort. Of the four buildings 3 escaped the war with no damage, and one only had minor damage when an allied plane flew too low and knocked the top of the spire to the ground. To give you an idea of the damage inflicted, Munich today is still uncovering unexploded WWII ordinances and the Palace of the Bavarian kings, which is one street over from the town center, is still being reconstructed to it's pre-war state... a project that is expected to conclude sometime around 2040!

Although I'm not sure on the matter, it's highly likely that Notre Dame's distinct architecture and central location would serve a similar purpose, allowing German Pilots to direction find there way to important targets.

Similar to SZCZERZO KŁY: While these events were occurring in Paris, Boeing built a fake neighborhood on the roof of an airplane plant.

This neighborhood (made by a Hollywood set designer) was half the size of Notre Dame's island, but you'd only need to cover the cathedral and some of its surroundings, which could be much smaller.

Since your entire premise is ridiculous [aka unsolveable] (especially the "no maps" with photography existent...) I'll save the cathedral with some technicality:

together with help from the Allies, prevent the bombers from spotting the cathedral?

together with help from the Allies

And there you go.

No German bomber can even spot the cathedral (not even hit it), if you have British and US Interceptors swarming France 24/7 (like the beginning of '45).

Yes, ground-support Anti Air would be nice, but the french can't provide that apparently so the fighters alone would have to do (and will do, assuming late-war setups).

If that counts as "anti air available", then the cathedral is 100% lost, as @Trish laid out with much detail. All the other stuff other people mention here won't work, because they assume either night-raids or super-high-flying bombers, neither of which will be happening here.

If by "no maps" you mean that Germany magically can't produce anything maplike, they'll just level Paris and call it a day, they'll hit the cathedral eventually. Or use StuKas, with which they can hit it with bare eyes.

The french (we :)) already did it during the first world war.

At the end of WWI, to avoid bombardment on Paris, the french did a "fake Paris" in countryside, reproducting the great landmarks of the city and mimicking the night life of Paris.

It was ALL about the lights on grounds, because bombers were coming at night to avoid anti air defenses. I don't think this perfectly answer your question because of this, but maybe it could give you some cool ideas.

Not the answer you're looking for? Browse other questions tagged cities military-defense concealment .