I was inspired by Dead Space which had cloned organ banks for transplants due to mining accidents. I honestly found this idea intriguing so what I'm wondering would it be practical or do better alternatives exist?

The "clone" would be a rapidly growing organism that takes the appearance of a bloated infant. The organisms have been cloned to not feel pain and if possible be virtually brain dead. All in all they would be basically a big sack of organs that, due to the human genetics used, takes the vague shape of an infant.

The process would be simple: a patient in need of an organ would either be put in cryo if it's a critical organ or simply wait a few days to weeks while the organ is being grown. Once the operation is complete, the rest of the organs are frozen and used for other transplants.

Would this be a practical/feasible organism or am I looking in the wrong direction?

It would be more practical with nonhuman donors. This is xenotransplantation. 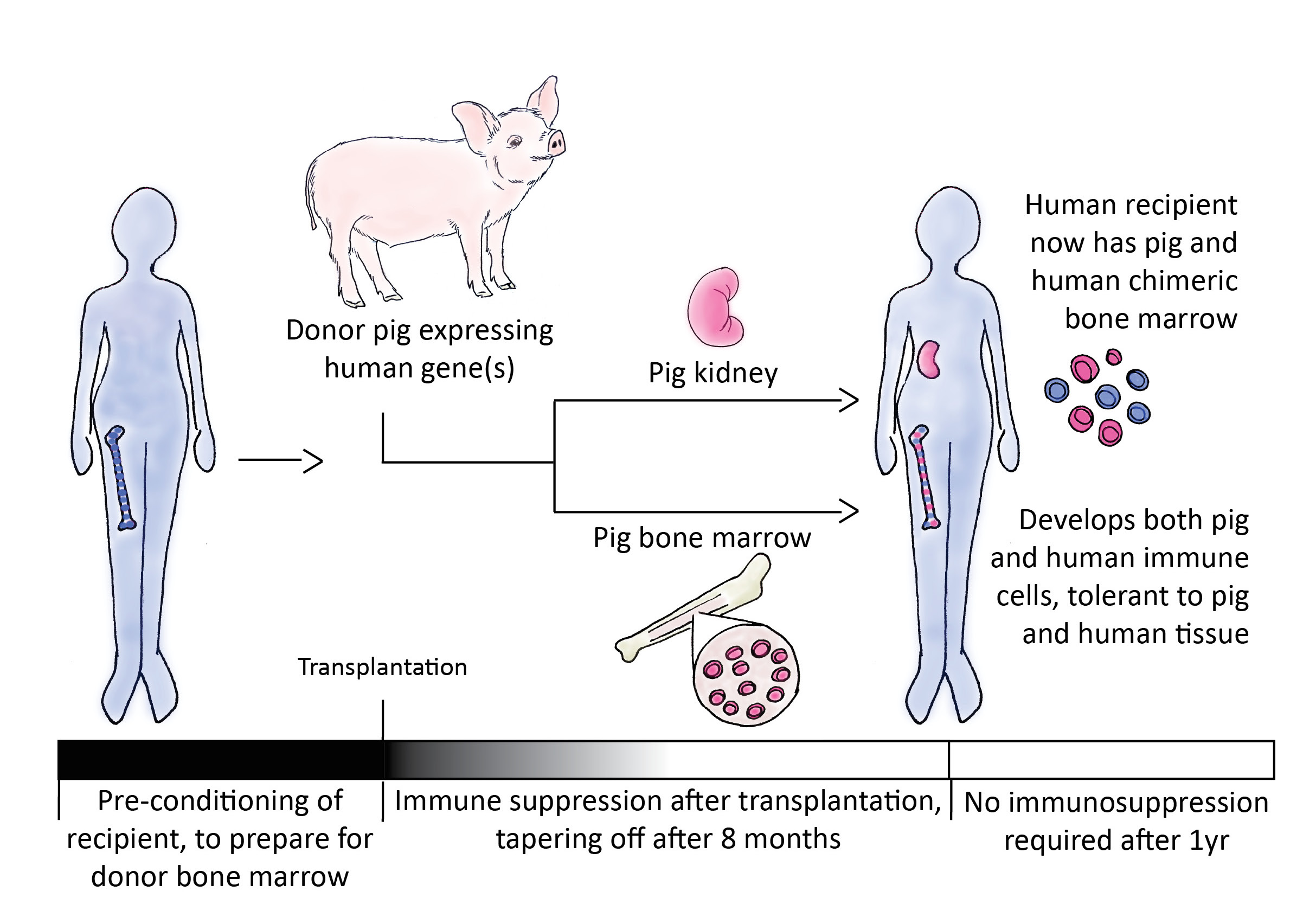 Human donor babies raise ethical concerns. Also practical concerns: humans grow up so slowly and are so dependent. Pigs grow up fast and a lot of the work of growing up large numbers of piglets to adulthood has been industrialized because we like pork.

A genetically engineered pig can feed itself and fend for itself. When its organs are needed the rest can be meat.

This is strictly coming at it from a practical viewpoint. For the tone of your fiction you may be digging the bloated baby / DeadSpace / H.R.Giger horror scifi angle. You could riff on pigs and keep it weird by making bioengineered aliens. Perhaps the aliens have no rejection barrier and can be genetically forced to grow multiple organs like tumors all over their bodies to maximize yield per alien. Other organs can be grown on these aliens as well depending on what your purposes are and how hard your NC-17 rating is going to be.

There is a far better way.

Really if the can age an organ form infant to adult in a few weeks then they can just start the clone from a single cell in a similar length of time. Or more realistically just grow an individual organ without anything else. Being able to rapidly grow one organ is easier than rapidly growing an entire body of organs.

But most likely making an organ will proceed like this.

The entire process would likely only take a few days and have little waste, we are getting close to this today, I expect to see it in use within the next few decades.

Yes With an If, No With a But

Other answers have suggested that live, fast-growing, barely conscious, human infant clones are not worth doing, because there are better methods which are less ethically fraught, better targeted to the required need, and less wasteful of resources.

Speaking practically, however, yes it could be done. But from a story-telling perspective, you might want to explain why it's done this way. You might have to explain that scientific advancement is at this very specific level where they can clone entire humans but [choose to?] not clone individual organs or use donor animals. (I don't know if one is "easier" than the other.)

Maybe you could say your society is better at other bio-sciences than genetics. E.g., Maybe the "clones" are actually twins, created at the parents' request (or by the State, or by their employer) by splitting the "original" zygote into one or more separate zygotes, and one grows normally while the other(s) is harvested and given the "clone treatment." Maybe the fast-growth is done using synthetic hormones instead of gene-manipulation. Maybe the insensitivity to pain and low brain activity is done by lobotomy on the fetus, or chemically induced partial-coma.

On the other hand, your audience might not question the premise. E.g., on Star Trek TNG, Lt. Cmdr. Data cannot use contractions. He just can not. Trekkies ask why but then just figure "Oh it's complicated" and move on (or keep ranting till they die lonely). But if you're going to explore all the dilemmas that arise from your particular type of organ bank, audiences may wonder why we are doing it this way instead of all the other better ways suggested in the other answers.

But you might side-step the sci-fi dilemmas by re-directing attention to more legal and philosophical problems. E.g., is the clone property of the patent holder who invented the cloning process? Why would parents or individuals permit clones or even care? Etc.

But then we're back to where we've started: what issues are highlighted by these clones, which haven't already been explored by androids, replicants, zombies, sentient AI, and yes, clones? I'm not saying there aren't any such issues, I'm just saying that if you're going to set up a highly specific premise, then it should ideally be for a good specific reason. So, from a story telling perspective, it's hard to tell how practical this would be.

The impractical part is that you would need to grow an entire human being (or all the pieces of one in a single unit) just to get one organ.

A patient in need of an organ would either be put in cryo if it's a critical organ or simply wait a few days to weeks while the organ is being grown. Once the operation is complete the rest of the organs are frozen and used for other transplants.

Why grow an organ to order (requiring the patient to wait for days or weeks and possibly die or deteriorate..."cryo" is not foolproof) if you can just pull a ready-made organ out of the freezer instead?

If it's necessary to customize each organ, then who will use the extra frozen ones?

It doesn't make any sense. Either patients use "off the shelf" organs (with perhaps a waiting period for rare histologies) or everyone gets a custom one.

You'd be better off finding a way to grow single organs. Ethically it's a much better alternative (and probably easier than ensuring your "bloated baby" isn't a real person with rights). If not single organs, then perhaps organs in natural groups. Like heart and lungs or kidneys and bladder.

Some yes, some no.

There are alternative pathways laid out below:

If you're going to grow a clone for replacement parts, you need stem cells.

These can be found in one of a few ways:

Then you have a few ways of growing the person/replacement organs.

So as the OP will see, the answer is some yes, some no. The OP is free to figure out how future research will find solutions.

Not the answer you're looking for? Browse other questions tagged reality-check biology medical cloning or ask your own question.

22
Physical correctness of trolls with high regeneration ability
5
What are some practical weapons for slaying monsters?
7
Sand Baths are they Practical for People on Desert Planet
4
Are folding Xiphoi practical?
4
Hair as an olfactory organ: Feasible or dumb?
6
What would a lung/gill combo organ be like?
3
Is it possible to have "organism recycler" organ?
2
Soldiers keep falling on scuba tanks, what are common injuries?