How much water is needed to create a Katana capable of cutting flesh, bones and wood?

I've created a character for my world that has the ability to manipulate water with her magic. She applied this ability by using it with a katana hilt. I will try to explain how she uses this ability first before I ask the question.

My question is, how much water would be needed to forge such a sword?

Instead of ice, you could make it a "sword" that uses a jet of extremely high-pressure water to make the cut. From Wikipedia:

In the nozzle, the water is focused into a thin beam by a jewel orifice. This beam of water is ejected from the nozzle, cutting through the material by spraying it with the jet of speed on the order of Mach 3, around 2,500 ft/s (760 m/s).

Waterjets use between one half and five gallons (2 to 19 liters) of water per minute when cutting. If you're only making a single cut (about a few seconds of operation), then the water requirements become much smaller. Depending on the magic system, you could continually pull in water from the atmosphere or have a portable tank of water available.

Industrial water jet cutters are used regularly to cut steel into precise shapes without destroying the integrity of the structure (since there's a lot less heat going into the metal). There's often an abrasive mixed in the water for extra cutting potential.

This would require some special construction, especially when it comes to the nozzle. Granted, you could handwave that with the fantasy setting. You could make the "hilt" portion the nozzle that the character holds to channel the water through.

While this doesn't really resemble a "sword", it can still cut like one. Bonus: it has multiple uses, not only as a sword, but a way to cut/puncture doors, locks, and small spaces.

Something that might help you is that there are at least 17 forms of ice, depending on pressure and temperature where it is formed. 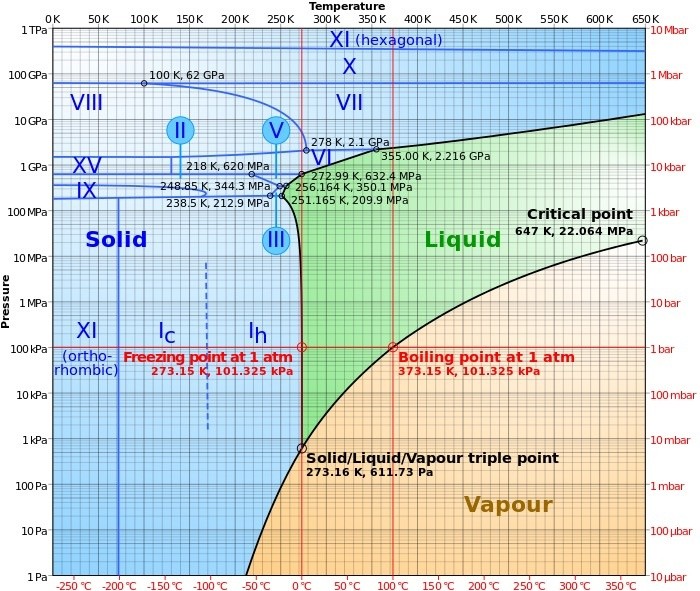 So you may be able to use some of the properties of these exotic types of ice to do what you want. For instance, ice that forms at super high pressure is much more dense, and ice that is colder is much harder.

That depends on the size of the sword. If your intention is simply to create a water replica of a katana, you would simply need the volume of the katana as the amount of water. Assuming the blade is about 1,50m long, about 3 cm wide and on average 0.5 cm thick, you would need 15*0.3*0.05 = 0.225l of water.

E: Also, a katana isn't really the best weapon from for cutting solid things like bones and wood. Katanas are only viable because of their layered crafting. But with magic involved, one could argue that the ice is strengthened and sharpened by the magic, making the form irrelevant.

That's a tricky question, because a lot of problems can be circumvented by saying 'because magic'.

First problem is that ice is much more brittle then steel, so a cutting sword made of ice with be shattered easily. But it seems that our protagonist can prevent it by magic.

Second problem is the density. The average density of steel is around 8 gram/cm3. The density of ice is 0.9 gram/cm3, which is almost 10 times lighter. So if you go just by replicating the shape of a katana blade in ice, it will weigh around 90-110 grams (katana blade without hilt and fittings is supposed to weight from 800 to 1000 grams, as far as I remember).

Using katana hilt with the blade as light as 100 grams will be a problem of its own, if you want to use it as a sword, especially against other people with swords. A weapon that light will have problems cutting because of the lack of the mass in the blade, it's easy to block or batter aside with a heavier weapon. Generally, cutting swords rarely went down below 600 grams in overall weight, and specialized cutting swords (ones able to do damage to bones and wood) very rarely weighed less then 800 grams (Here is some data on the weights of different variants of British 1796 light cavalry sabers, one of the lightest effective cutters I know of). But calculating the weight of a cutting sword mathematically is a very tricky proposition - it's more of an engineering task, not purely mathematical. A lot of nuance lays in the physical properties of materials, their flexibility and strength. If we assume a material with infinite tensile strength, infinite sharpness and infinite slickness (zero friction), then we may go lighter then 600 grams for a sword.

As far as I see, your character can circumvent the problem in two ways, both of which will be decidedly magical. First, we can assume she can also vary the density of ice at will - then your ice blade would weight just as much as a steel one, and for all effects and purposes it will behave as a metal weapon, as far as handling and balance is concerned. So upwards from 800 grams if it's a katana blade, less (around 600-700) if it's a thinner and broader one, like tulwar or 1796.

Second variant is treating 'water' as an advanced nanomaterial. Here, again, we don't care that it's water before magic starts acting on it. In effect, what you want is a mono-molecular blade - one molecule in thickness, but of the length and breadth of a sword blade. The amount of water for this task will be trivial, less then 10 grams, I think.

Not quite a katana

You need about half a liter or less of water, so it comfortably fits an arm bracer. What you need next is energy.

Water by itself cuts very little, and ice is too weak and brittle to form a blade (you can still stab with it though).

Your water-mage must follow a different approach: the "katana" is actually two laminar sheets of water and ice crystals, one twentieth of a millimeter thick, held together by a pressure in excess of 600 MPa, and flowing one into the other at three times the speed of sound. Under these conditions, ordinary water will cut through hardened steel, though slowly. You do not have a katana, but a water chainsaw plus drill.

Used to stab, this katana will go through a 1mm thick steel armour plate in about two seconds, and the body behind in not much more.

This would use a tiny amount of water and be sharp enough to cut through most substances.

Have your magic user put her energy into aligning and strengthening the intermolecular bonds. Water molecules are chevron shaped. Align them head to tail.

It will be completely invisible.

Magic user draws what looks like a sword handle from her belt and adopts a stance. Bad guys fall about laughing. She swings a cut. Nearest bad guy slides in two invisibly sliced from shoulder to hip. Bad guys stop laughing.

There could also be an element where she can vary the length. A very scary weapon.

You could also consider adding impurities to the water (there is some precedent for this in fantasy stories, see Avatar: The Last Airbender where certain water benders are capable of "bending" blood due to its high water content, and metal benders are earth benders who can manipulate metal by the "impurities" in it).

As a practical example, there is a real world material known as pykrete (a mixture of water ice and sawdust) which has properties similar to concrete.

There are also variants which use hemp or newspaper to increase the tensile strength. Its not a stretch to envision that this user might have some specific recipe which creates a stronger pysteel composite for instance (the alchemy of their specific water mixture could also be a source of on going experimentation or the gauntlet might have different compartments of suspensions which can be swapped out to provide different physical properties of the final sword).

Not the answer you're looking for? Browse other questions tagged magic weapons water .

27
How would sails from a fireproof material affect ship's performance?
3
Limited Fate sensing powers to give protagonist of miyazaki style story
10
Alynn the Scientific Mage: Self-Sustenance
6
How can I create sonic boom using personalized katana?
21
For a head of a palace guard (staying mainly inside the palace), is an estoc a realistic weapon of choice?
1
How to combat magic as science?
2
Possibility of Spirit Remnant-absorbing Character Creating Organism
3
How can I flesh out and balance my magic system based on the 7 deadly sins and heavenly virtues?
3
Clothing With Magic In Mind