At What Point Does a World's Twin Planet Disappear, from the Viewer's Perspective?

This is Yeola~Camay. A double planet orbiting Sharro, an ordinaryish star somewhere in the universe of Far Far Away. 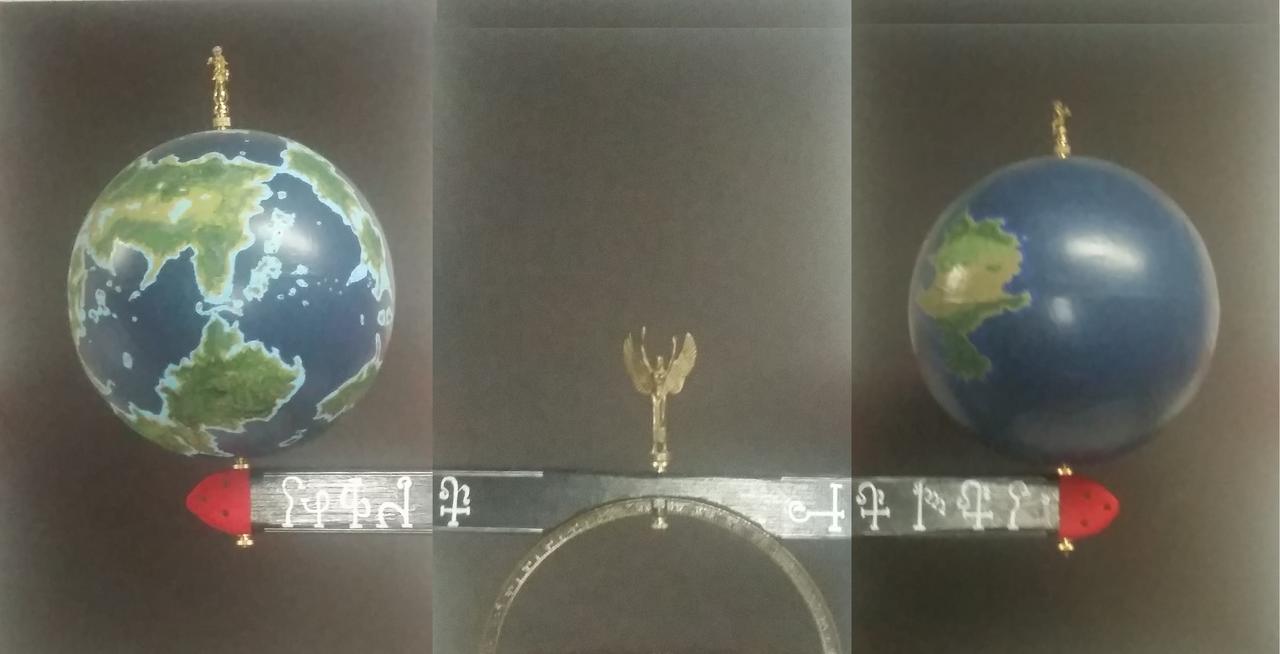 Here is a map of Narutanea, the Eastlands of Yeola: 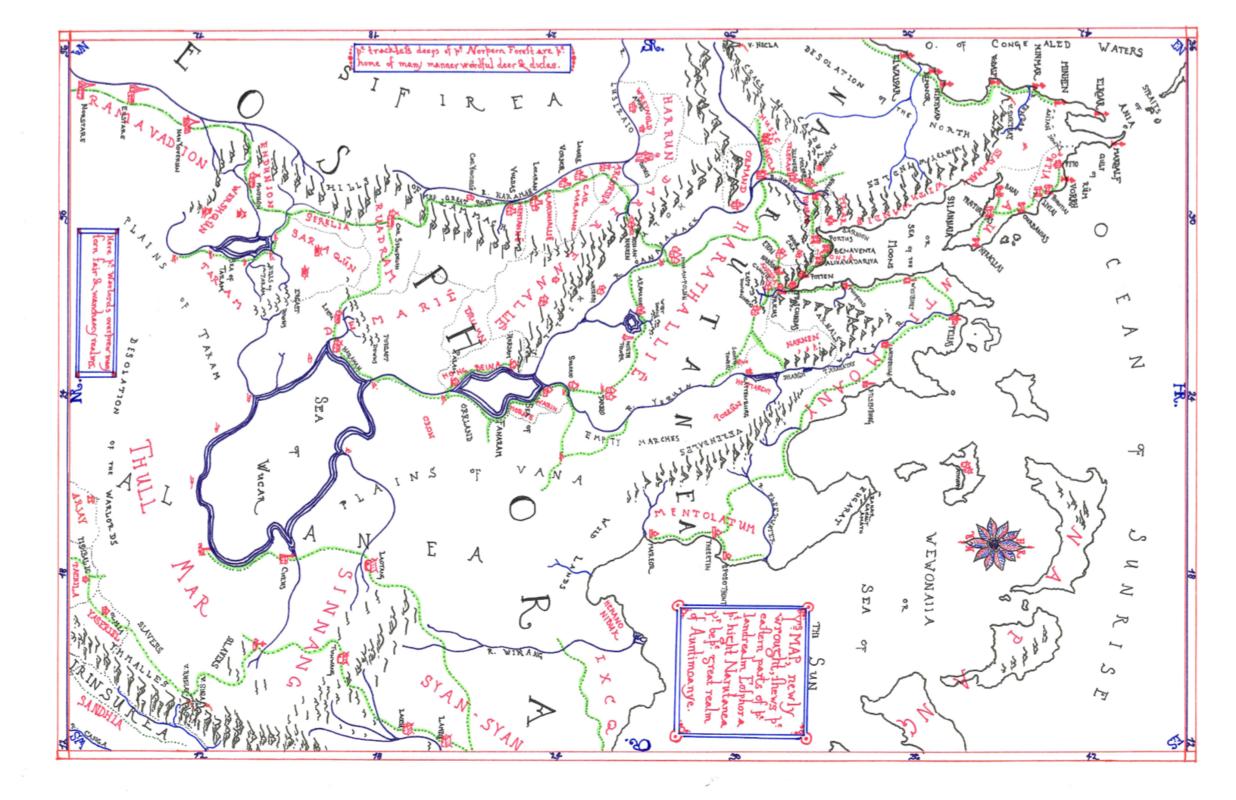 East is to the right, west is to the left. The markings around the edges of the map show degrees north of the equator and east of the prime meridian. The space between each is six degrees.

The land to the south of the Sea of the Moon and to the west of the Ocean of Sunrise is labelled Auntimoany and its chief city is Pycleas. Pycleas is roughly 24 deg north and 36 deg east (close enough for government work!). (This is point of interest no. 1). Directly to the west is the country of Harathalliê, where you can see a lake. In the vicinity of the lake are the West Downs and the old North Tower. (This is point of interest no. 2)

The two locations are about 1200mi distant, as the raven flies.

This is a map of the night sky, centered at the ancient observatory just west of Pycleas: 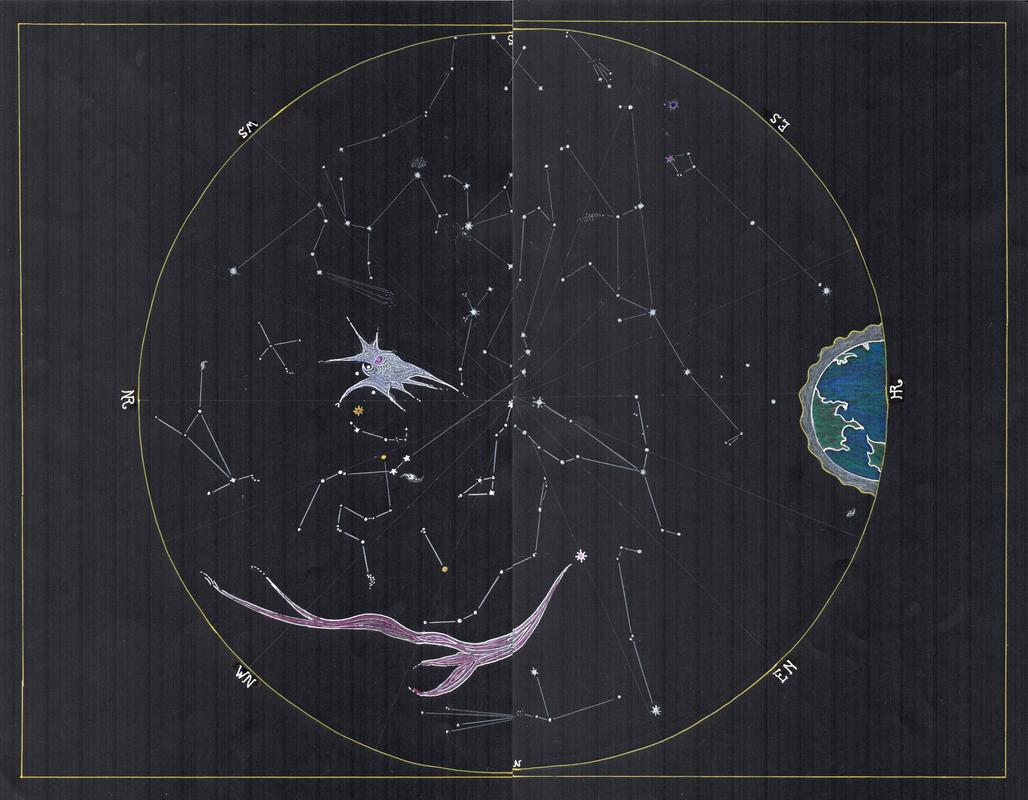 If you lie on the courtyard of the Observatory with your head towards the east (right side of the map) and tilt your head back, you'll see the red gash of The Chasm down towards your right hand and you'll see a portion of Camay above your head.

This is a map of the eastern sky, showing approximately what an observer would see looking out east over the waters of the Ocean: 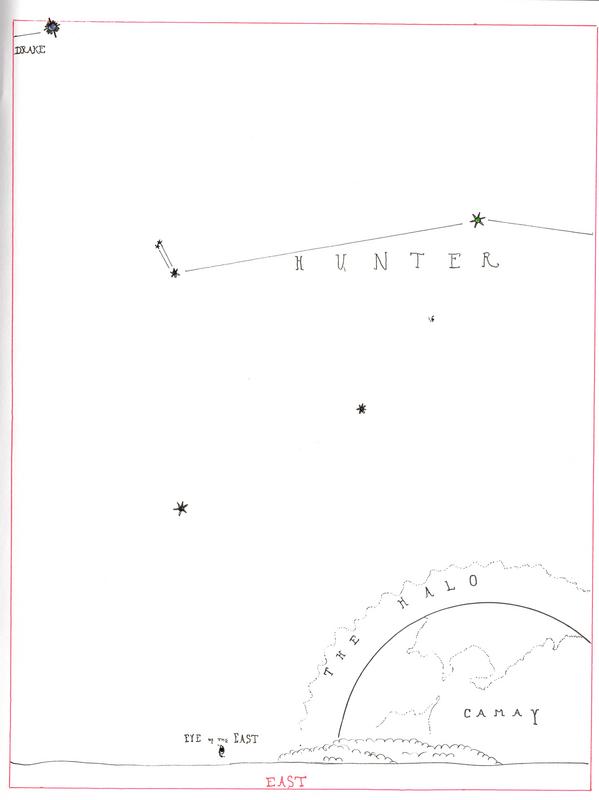 In this map, the observer is looking towards the east, making the north poles of both planets off towards the left.

I figure, from this particular vantage point, the observer can see about 25% to 30% of the twin planet. Since they're tidally locked with respect to one another, that aspect of the sky never changes.

Given that Camay would be more visible the farther east I travel from Pycleas, because I'm moving towards the line in space where the twin planet's cores line up; about how far west can I go before Camay disappears entirely?

To make life easier, while there are mountains (none terribly high) and hills and valleys and forests and so forth between Point no. 1 and Point no. 2, we can probably sweep those differences in elevation under the most convenient of metaphorical rugs. I'm looking for a broad range (say within 50 or a hundred miles) rather than a definitive point, brought out to fourteen decimal places.

Also, you can ignore that their miles and our miles are slightly different in length.

The very allerbestest of responses would couple visuals with numbers. A merely acceptable response will simply state a rough distance (in miles) west of Pycleas where the twin planet disappears.

I'm amazed at the amount of detail here, but most of it is really not necessary. We only need to know 3 things:

To elaborate on the last bullet, we need the point that lies on the axis connecting the two cores, like you mentioned. I'll call this point P. You'll need to find P for yourself because it's not clear from your maps where it is exactly (though you mentioned it was east of Pycleas, so presumably you have some idea).

I'll take your answer of 11093 miles as the diameter of both planets from your comment. Having the same diameter means that the answer to "where on Yeola can you see Camay" becomes really easy. Simply divide Yeola into hemispheres, with one of the hemispheres centered at P. If you're in the hemisphere that contains P, you can see Camay. If you're not, you can't (Camay will be below the horizon). Easy as that!

For a more detailed answer that includes how large in the sky Camay is at every point, we need to know how far apart the two planets are, and how they rotate around each other. All of this information is in your skymap.

Camay is (nearly) exactly in the eastern part of the sky, which seems to me can only happen if they orbit around each other in the same plane as their equators. On Earth, we defined north and south as the directions toward our pole of rotation. It seems logical to me (and supported by the evidence of the skymap) that the people of Yeola did the same. Since Yeola and Camay are tidally-locked, Yeola's rotation axis is parallel to the rotation of Camay around it, so I think I'm safe to assume that Camay and Yeola orbit in the plane of each other's equators. That simplifies things a lot, too.

So how far away is Camay? If the skymap is accurate, ~19353 mi away. To see why, look at the diagram below. 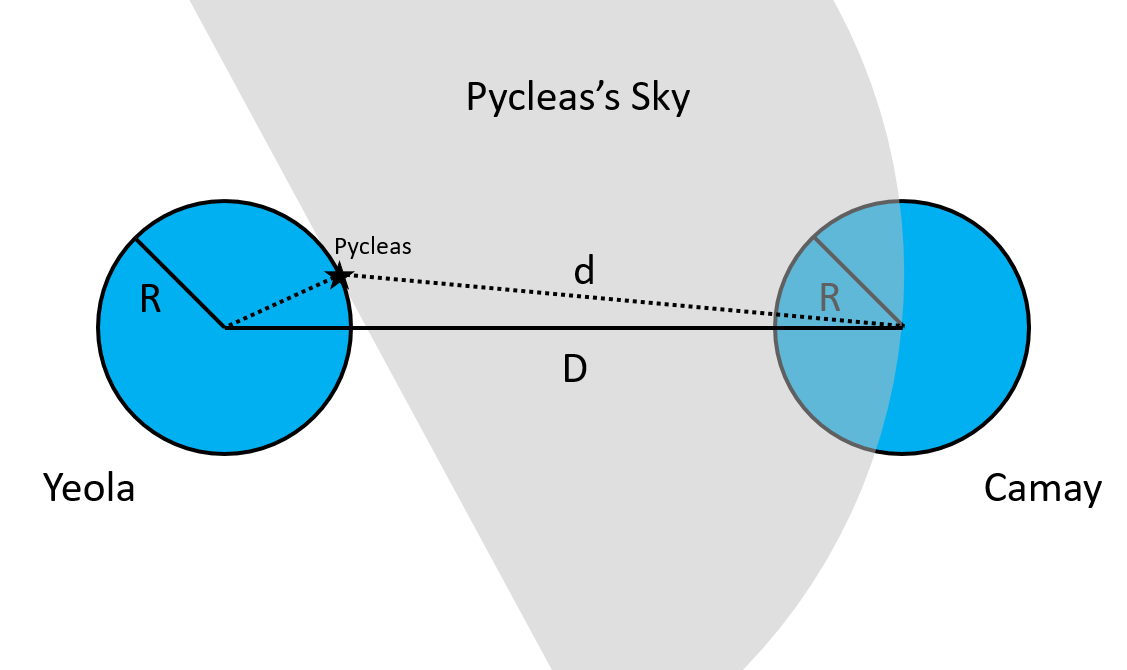 Which is to say that these planets are frighteningly close to each other. There's a little less than one planet width between the two of them. This will be true as long as the skymap is accurate, even if you eventually change the scales of the planets (at present they're about 40% wider than Earth).

But fair enough, let's actually use this to calculate the size of Camay in the sky as a function of your angle away from P, which we'll call $\theta$.

How do you find $\theta$? Well, if you're directly north or south of P, $\theta$ is just your latitude (N or S), and if you're directly east or west of P, it's the difference between your longitude and that of P. If you're at a different position, you can find it by simply calculating the distance to P along the surface, then dividing by Yeola's radius (this answer is in radians, so multiply by $180/\pi$ afterward to convert to degrees).

Anyway, the angular size $S$, in degrees, of Camay for any theta is

Here's a handy reference (pun definitely intended) if you want to be able to picture how large in the sky it is. (Source)

Just hold out your hand at arm's length, and these gestures show about how big these angular sizes look.

I have enough information to calculate where P is without you telling me, and thus give you an exact answer, but I'm not sure how valid it is to assume that Camay in the star map is perfectly sized. Regardless, I think this answer is close, and certainly $\theta$ for Pycleas is roughly 70 degrees, since this is required in order to have Camay near the horizon as seen from there.

Thus, you stop seeing Camay when you cross into the western hemisphere, ~36 degrees (~3,500 miles) west of Pycleas.

Trace a circle around your globe that passes through both poles. Make the plane of this circle be perpendicular to the line between the cores of Yeola and Camay.

This circle splits the world in to hemispheres.

On the one closest to Camay, Camay is visible. On the farside of the world, Camay is never visible.

Given a circumferance of Yeola, the distances would be simple formulas. Calculating the circumferance given the information you've provided is likely doable, but I am unable to do so at this time.

3
Ocean and air currents on a water planet
1
Would a planet be shaped any differently if it has a single non-dipole?
3
Calculating libration of a tidally locked planet
11
Determining climate and biomes in a non-planetary setting
8
Tidally locked dual planet system and their magnetospheres
11
How long would this eclipse last?
30
What would influence an alien race to map their planet in a way other than the traditional map of the Earth
6
How would a torus planet's magnetic field work?
13
What is the largest possible appearance of a celestial body in the sky?