Is it possible for people to live in the eye of a permanent hypercane?

Wikipedia lists a potential for a hypercane which can have an eye of up to 190 miles in diameter https://en.wikipedia.org/wiki/Hypercane

Say there's an earthlike planet that for whatever reason has a permanent hypercane in one of its oceans (kind of like the big red spot on jupiter). This hypercane is in a fixed location and doesn't move. Also say there happens to be an island in the very center of the eye that's roughly circular and about 100 miles in diameter (leaving 45 miles from any shore to the wall of the hypercane).

I'm not interested in talking about whether a storm like this would be possible. I'm interested to know whether this island would be capable of sustaining human life for a long period of time - say hundreds or thousands of years. If not, what things are preventing that from happening?

The eye is a region of mostly calm weather at the center of strong tropical cyclones. The eye of a storm is a roughly circular area. It is surrounded by the eyewall, a ring of towering thunderstorms where the most severe weather and highest winds occur.

In strong tropical cyclones, the eye is characterized by light winds and clear skies, surrounded on all sides by a towering, symmetric eyewall.

If we assume this to be true also for an hypercane, it means that the island would be constantly into an area of calm weather, meaning no rainfall, for centuries. The island itself, lacking rainfall, would be a barren landscape, more or less like the Sahara or the Atacama desert.

Lacking trees, there would be no possibility for humans to build boats and therefore to fish, therefore on the long term human life would be simply impossible on the island.

While the weather in the eye is calm and possible to live in, there are big sea waves from the storm. The coasts would be uninhabitable and fishing impossible. If there are major rivers, large ocean waves and swells tend to propagate upriver.

The island would need protection, such as coastal cliffs from hard rock which does not erode easily. Or perhaps very extensive coastal lagunas and mangrove forests.

The eye of a terrestrial hurricane, no matter what size, is a zone of calm winds and relatively clear skies around which whirls the raging tempest. 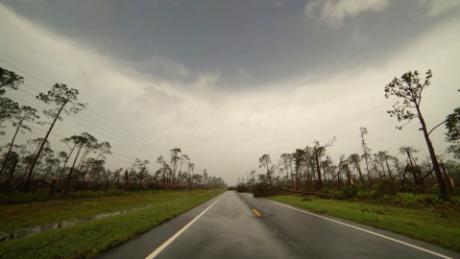 The picture shows what it's like inside a hurricane's Eye. Nice and calm, trees are happy, not a lot of rain or wind.

This is the accompanying video, courtesy of Hurricane Michael.

If your hypercane remains perfectly rooted over and surrounding an island, then people can live on the island in its Eye indefinitely. Winds are calm; precipitation is sparse to light. Since your storm is a magical artifact, the kataigothurge that whipped it up in the first place could allow for occasional squalls and showers within the Eye.

The limiting factors will be the usual for island life: resources & space. The Storm itself will serve to keep them in and outsiders away, but apart from that shouldn't have much of an effect on the island itself.

I would like to add to the point of lacking rainfall.

I would posit that are some turbulences or the eye-wall is somewhat wandering around or splitting of rain clouds. When looking at pictures of hurricane eyes the wall is not smooth and the sky is not completely free of clouds.

So if you have a very large eye you could declare that from time to time a part of the wall tears off and brings rain to a part of the island. You could state that the midst of the island is like a desert but the nearer you get to the eye wall the more water you get, and also that the air is humid, so that while it maybe rains rarely it is enough to support life.

A fun twist would be a half-island extending beyond the wall and dangerous expeditions into the storm, and a mountain chain on that half-island siphoning a lot of water from the eye wall (Foehn effect).

Not the answer you're looking for? Browse other questions tagged climate weather .

2
What would happen to life on Earth if the planet had total cover of permanent clouds?
5
The Bering Land Bridge--Open For PERMANENT Business
20
How to create the eternal storm?
6
A world without permanent water on the surface?
3
What would be needed for the entire planet to have a polar climate?
9
How, and for how long, could a permanent storm be maintained on Earth by a stationary mega-structure?
18
Is it possible for a planet to have the same seasons in both hemispheres?
6
Would a permanent rain be possible?
3
Water in the interior of a very large continent