How could a very strong impact on a planet create deformations on the opposite side?

I have received some great answer here and they all mostly point to the fact that while effects on the opposite side of the planet are possible, the deformation may or may not resemble a crater but more likely an earthquake or fault zone. I have picked the answer that I think best describes this process in a way that I can build upon for use in my world.

However, my question does ask how it could happen not if it was possible (perhaps this was not clear). In my second set of bullet points I tried to express that I am open to a non-Earth like planet - or even something unlike any planet we know of so long as it could form in theory according to physical laws. I am not sure if I will get an answer satisfying this criteria but this would be the ideal answer.

In a previous question, I asked about mountains, rivers, trees, and so on forming within an impact crater surrounded by desert. I left it open about how this crater was formed.

Note: A question similar to mine has been asked here, but the answers do not help me.

Let's imagine that a large, circular or spherical object impacts a planet on one side. The desert mentioned in the previous question exists on the opposite side of the planet from the site of impact. Are there conceivable conditions under which:

In order to achieve these specifications, let's say that:

I would like a hard-science answer if possible. However, since this is for a fantasy (with a bit of sci-fi) setting, I am okay with some hand-waving if it comes to that. This event would have happened in the far history of the world so its precise nature would not necessarily be known or understood.

Seismic shaking. the weakening shock wave eventually degrades into elastic waves. these elastic waves are similar in many respects to the seismic waves produced by an earthquake, although impact-generated waves contain less of the destructive shear-wave energy than earthquake waves. the seismic waves produced by a large impact may have signiicant effects on the target planet, creating jumbled terrains at the antipode of the impact site if they are focused by internal planetary structures, such as a low-velocity core.

this effect has been observed opposite caloris Basinon Mercury and opposite Imbrium and orientale on the Moon. the equivalent richter magnitude M caused by an impact of energy E (=1/2 mpvi2) is given approximately by:M= 0.67 log10E – 5.87.

Which is a fancy way of explaining that the force of the initial impact gets all jumbled up on its way through the planet such that what comes out at the antipode isn't circular, but resembles an earthquake.

The source of that quote is from an unknown to me book by H. J. Melosh, Chapter 6, that appears to have been made available for a geology class at the University of Chicago. If you look at the /docs directory, you'll find a plethroa of information.

You can get antipode damage, but you cannot get the formations you're looking for. Even dealing with a sphere like the moon, which can be somewhat thought of as homogenously solid (rather than having solid and liquid layers), you don't get the kind of damage you're looking for.

Keep in mind that this needn't stop you — unless for some reason your story needs to pass muster in front of a bunch of geology PhDs.

However, it would not create a crater, but rather an increased fracture of the crust and possibly a bulge. Only if there is some underground collapse, you might get a small crater.

You can find more in this answer

There is geological evidence on Earth that impacts have caused fault zones and earthquakes, leaving permanent features on the other side of the planet.

The mechanism is focusing of the seismic waves -- one kind of wave (p waves, as I recall, the ones that are compression like sound in air) travels completely through the Earth, but it travels at different speeds in different densities of material -- and reflects off discontinuities, just as light or sound will do from a sharp boundary with different speeds on the two sides.

The end result is that, although the refraction of these waves curves them upward, they then reflect downward from either the crust-mantle boundary or the mantle-outer core boundary. Overall, this has the effect of focusing these waves into a fairly small area (much smaller than a continent) on the opposite side of the Earth from the impact. This area will then experience seismic events a sizable fraction of the magnitude of the direct impact events -- but of course without the vapor/ash cloud, ejecta, heat blast, and surface waves.

I've read a hypothesis that the Permian Traps, blamed for one of the great extinction events, were created by an impact larger than the Chicxulub event in the south Pacific (where we have little chance of seeing the impact footprint directly because the sea floor there has subducted since). 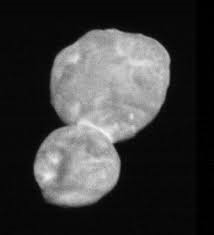 Shift the center of gravity.

A hard impact will liquefy impactor and target which will then congeal back to a sphere. So no hard impact.

Let us consider an impact that is barely an impact - the planet overtakes the impactor from behind such that their relative velocities are nearly equivalent on impact. I here assert that this impact, despite the large size of the impactor will be more on the scale of a dinosaur killer than a Theia-Earth moon former.

Now there will be a snowman shaped planet like Ultima Thule. https://www.nationalgeographic.com/science/2019/01/nasa-new-horizons-reveals-snowman-shape-mu69/

The center of mass of the snowman is now wonky. It will equilibrate over geologic time. The head of the snowman will move inward and get smaller. The butt of the snowman (that is what you are interested in, syntonic) will also move in, producing a deeper and deeper dimple. It is not a crater exactly, that dimple but it is definitely a low point and might suit your needs.

A Collision at relativistic speeds with a PBH.

A primordial black hole, according to Russian Physicists:

Yakov Borisovich Zel'dovich and Igor Dmitriyevich Novikov in 1966 first proposed the existence of such black holes. The theory behind their origins was first studied in depth by Stephen Hawking in 1971

Such an object is formed as a result of the big bang and not stellar collapse, so, surviving ones (after nearly 14 billion years) would not necessarily have any kind of accretion disk.

But you'd need one of just the right size and relative velocity such that it pass through your planet and not devour it, the vector would matter also, unless the planet get perturbed into an elliptical or oblique orbit (maybe that's not a bad thing for your world).

The impact crater would not just be caused by the black hole sucking in material from the ground, but also by the follow-through of any material it was dragging with it - such as the atmosphere, (see this answer from physics.se) leaving a crater perhaps a few hundred meters across.

It could pass through an Earth sized object in less that a fortieth of a second, both consuming matter as it goes - and dragging crust, magma and core material with it in a narrow tube.

As it exits, the dragged material could crash upwards into the crust and create a super-volcanic eruption at the surface, disappearing into the void never to be seen again.

The caldera of a super-volcano can be quite large: the La Garita caldera being 22 by 47 miles (35 by 75 kilometers) a little smaller than Yellowstone, the former being the site of the biggest known eruption in Earth's history.

Not the answer you're looking for? Browse other questions tagged science-based geophysics .

8
Impacts of a moon falling on an Earth-like planet?
8
Is it possible for a temperate forest/freshwater area to form within a desert?
2
Could I create a shock on Earth's crust so strong that it would affect the other side of the Earth?

10
How could a specific asteroid be diverted to impact the earth?
0
Meteor Impact Events and Magnetohydrodynamics
8
Moonlight and the night side of a tidally locked planet
1
What if the Moon gets a new big crater?
1
Swapping the sunny side of tidally locked planet
5
A Possible Celestial Object Hidden from the Bright Side of a Tidally Locked Planet
9
How could a technological society exploit an absurdly strong, permanent magnetic field?
9
How could formamide lakes form on an exoplanet?
8
Impacts of a moon falling on an Earth-like planet?
1
Are large meteor craters possible with the survival of most human society?