If Sweden was to magically float away, at what altitude would it be visible from the southern hemisphere?

If a chunk of land mass the size and position of Sweden took off and floated away in a straight line, exiting the atmosphere and orbiting earth, at what distance would it be visible from, let's say, South Africa?

Alternatively, what size would our planet have to be to allow for such a floating land mass to be visible from the proportionate equivalent of South Africa, while still within the bounds of the planet's (unchanged) atmosphere?

Edit: Thanks for all your detailed and interesting answers! Didn't expect my silly question to blow up like that, tbh.

I was quite tired when I first posted and realize that I haven't specified some things properly.

Originally, I had intended for floating Sweden to remain geostationary, orbiting with the planet rather than around it (because magic). I thought perhaps the atmosphere's refractivity (which only @Chronocidal mentioned as far as I've seen) might allow for a high enough Sweden to be visible on the horizon, if the observer was positioned at the northernmost point of South Africa, with no obstacles in his line of vision, at maybe 1500 meters above sea level.

But in light of the response here, I decided to just have my floating island properly orbit the planet somewhere within the thermosphere instead.

Given Sweden has a latitude of 60° N and south Africa of a bit over 30° S, you can never see one from the other no matter how high one is and no matter how small the planet is (as long as it still is big enough to allow you to neglect the distance between your eyes and the surface).

The Sweden simply rises further away in the hemisphere invisible from South Africa.

That is if Sweden rises simply above and continues to stay above the used-to-be-Sweden, i.e rotates with Earth. If it starts orbiting Earth forming new moon, it will probably pass over South Africa sooner or later. Obviously, I am magically hand-waving away the atmospheric friction. 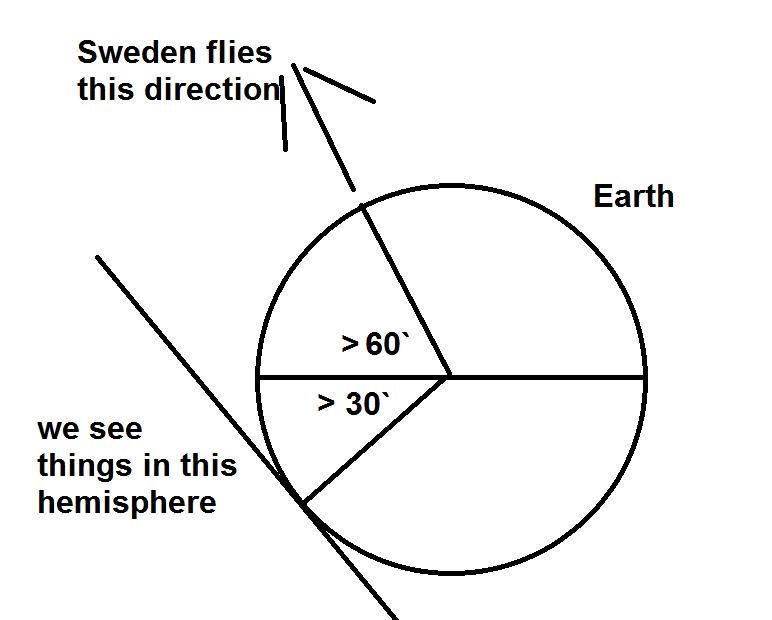 Edit 2: for a more general solution, given both points have the same longitude: cos (difference in latitude) = (Earth radius, 6378 km)/(Sweden distance from Earth center, i.e. height + Earth radius).

For point directly below equator this yield

There is no atmospheric height any object of any size can be, perpendicular to the location of Sweden, that could be seen by anyone standing anywhere in South Africa.

I don't need math to prove this. Just take out a piece of paper, draw a circle, and use a ruler to start drawing lines. That combination cannot be done.

Alternatively, visit maps.google.com, scroll out until you can see the whole planet, and rotate it until Sweden is in the middle. It'll look something like this (credit: Google): 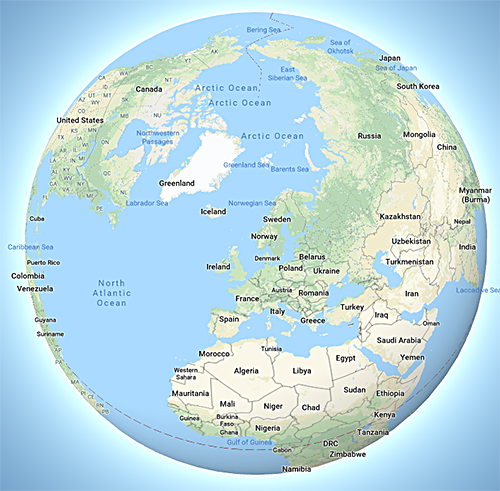 Molot's answer (which is the mathematically pure answer, go vote for it) brings out that tall things slightly beyond the edge of the hemisphere defined by Sweden acting as the pole or center of the circle will see Sweden if it's high enough. But below that it's geometrically impossible — there's a planet in the way. 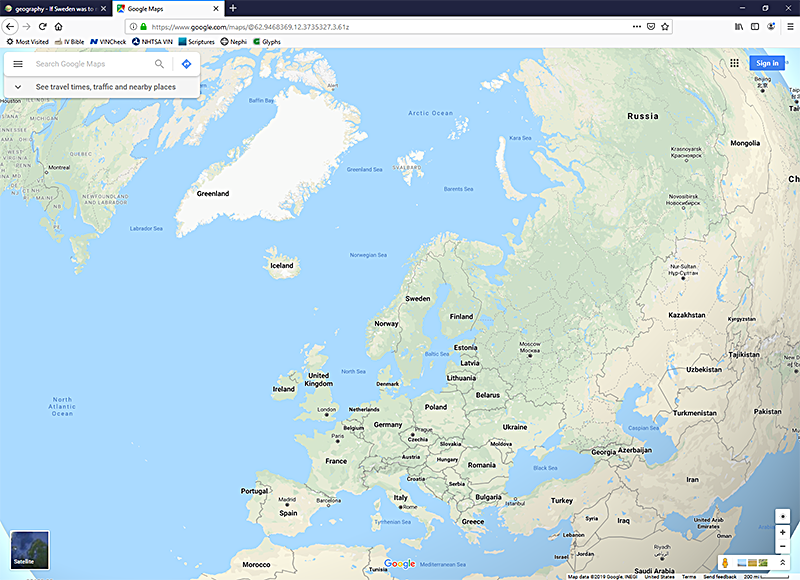 There is no height within the atmosphere that would allow Sweden to be seen from any point within what we would normally call the Southern Hemisphere. There is a height where it could be seen by a couple of points in the Southern Hemisphere (see that area below the dashed line in Africa? Yeah, the dashed line is the equator), but Sweden would be so far outside Earth's atmosphere that it likely doesn't matter for your story.

This assumes you do not subscribe to the Flat Earth theory. I don't.

This answer is fundamentally flawed in that it assumes that the 'horizon' formula is valid for any value of h.
Unfortunately, this is simply not true, and as the image shows, it is only a valid approximation when h is much less than RE

If you can see something depends on how high you are, and how high is what you look at: 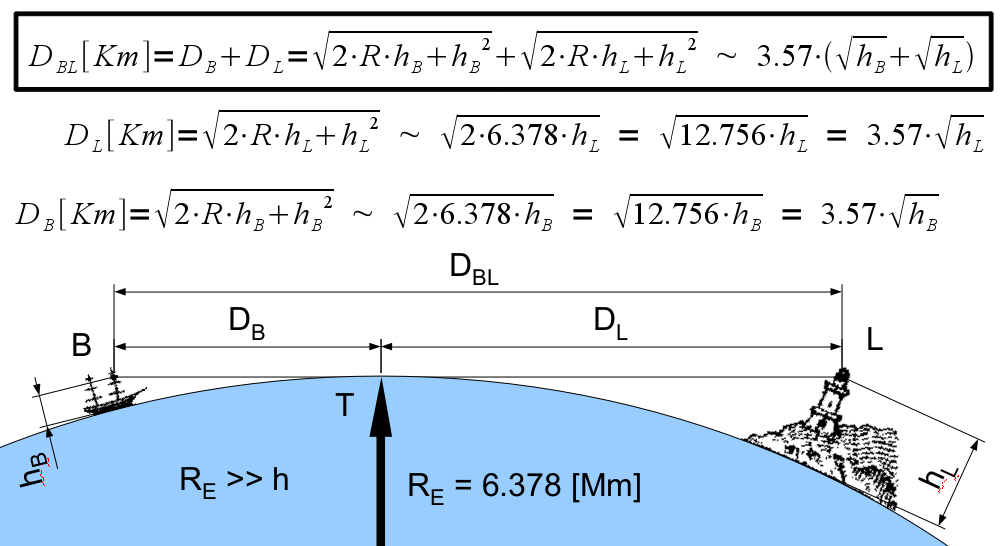 Africa is reasonably flat*, so assume a person 2 meters tall (or he may be standing on something ;) )

You can look and fiddle with the numbers here with nice calculator that does the math for you. With Observer at 2 meters and object at the edge of space (100km) visual horizon is at the distance of 1134km. Distance from Sweden to South Africa is 10058 km, so it is about ten times too far to have a line of sight.

To get the line of sight, you will need to put Sweden at height of about 7922km. That's outside atmosphere, but inside Van Allen radiation belt, so long time life support would be hard for at least these two reasons.

* Of course for more precise result you should include the mean or max elevation of South Africa, and decide where, exactly, your observer is placed to account for mountains, valleys, trees and so on. The above calculation is meant as an estimate, and to show a way how to calculate it yourself.

The question says only "from South Africa" so we can assume optimal point of observation, Thabana Ntlenyana 3482 meters high (+2m person) for the flying height of "mere" 3452km. No trees or other mountains to significantly change this altitude.

If you imagine an idealised planet with a star at an infinite distance, how much of the planet can see it? The answer is half: the star projects a cone that rests on an equatorial line perpendicular to the direction it lies in. Those standing on that equatorial line are looking along the tangent to the curve of the surface of the planet.

So the basic question is, what is the minimum distance at which this is still possible, or rather, given two opposite points on a circle, where do their tangents intersect? This is effectively squaring the circle that forms said equator, which simplifies down to the square root of 2r^2 (minus the radius of the Earth if you want the height above it).

In the case of Earth, that comes to 2,639km, however there are other factors regarding the shape of the orbit that might have an effect. Obviously, given an orbit it will not be visible at all times to the whole planet. However, if that orbit is geostationary (e.g. proportional to the rotational speed of the planet) it will only be visible to half the planet when above said height.

Given orbits are elliptical, it's also possible that it is not above that height the entire orbit. If the orbit resonates with the rotation of the planet and has a low point below said height, this could create dead spots that will never see it in the sky.

Finally, there's always the possibility of mountain ranges and atmosphere practically limiting visibility along the line of the tangent.

You have three questions here.

1. How high can a geostationary Sweden be visible from South Africa?

This is a question that humanity has pondered since we first climbed down from the trees.

The other answers are correct that if two points are more than 90 degrees apart on the globe, they cannot see each other at any height (unless the earth has a big groove in it or atmospheric refraction does something funny, but we don't have to consider that in this answer).

The correct way to calculate angular distances between two points on the globe is to use the haversine formula. This takes both latitude and longitude into account. I'm feeling a little lazy today, so I will just take the distance measured on Google Maps, divide by 40,075 kilometers and multiply by 360 degrees. This is equivalent, and I've checked that the math lines up.

If Sweden goes straight up from the point of view of its center point, the important location of Sweden is Flataklocken at 62°23′15″N 16°19′32″E.

I found a point near South Africa's Zimbabwe that is 9,472 km away from Flataklocken, which comes out to 85.09 degrees.

You're in luck! You can see Sweden from South Africa. It will be low in the sky, within 5 degrees of the horizon. It will be brighter than the full moon since it's a lot closer.

If you intend to actually do this, I'd recommend buying a hot air balloon to take South Africans up to view.

Some math: a = 85.09 degrees (this is the angular distance between South Africa and central Sweden) r = 6371 km (this is the radius of the earth) find h, the height of Sweden

This is over 10 times earth's radius. It's far outside earth's atmosphere, but low enough it's not going to crash into the moon.

2. If Sweden were floating in a geostationary position in the upper atmosphere, how far would it be visible?

Earth's atmosphere only goes up 480 km, so if you want Sweden to stay in a geostationary position in the atmosphere, it won't be visible from South Africa.

If you want the people of Sweden to have enough air to breathe, it will have to be even lower. I'm not going to run the numbers for that, because that's not the question you asked.

The equation is the same, except in this case, we know h and r, and we're trying to find a.

This comes out to a distance of 2400 kilometers.

This isn't far enough to see from the southern hemisphere, but you would still be able to see southern Sweden from parts of Algeria and Tunisia. As far as I'm concerned, that's good news!

3. Can a Sweden orbiting in the atmosphere be visible from South Africa?

Orbit means something is spinning around a world without rockets or thrusters because it is going so fast that gravity can't pull it down. You can calculate the orbital speed for any height in a vacuum. Unfortunately, orbit is not possible within the atmosphere because the air resistance will eventually slow Sweden down so that it will crash into the earth.

Don't despair. You can still make Sweden fly. You'll need to buy big jets or something else that uses energy to move it around. I don't know what your budget is, but I think it's still worthwhile. Think of the spectators in South Africa.

Not the answer you're looking for? Browse other questions tagged geography moons astronomy or ask your own question.

15
Could a moon have its own satellites visible from the planet it orbits?
12
What would happen to Earth if the Moon was destroyed?
19
Would it be possible for a planet to form so it has all of the landmass in only one hemisphere?
7
What mathematical function would describe the relationship between two moons?
15
What impact is required for a visible (from Earth) ejecta plume on Earth's Moon, and would the Moon survive?
4
What would happen if a planet was surrounded by an unusually large amount of dark matter/energy?
1
Where would wind blow away the smoke from a giant fire?
5
What would the night sky look like from Luna (Earth's moon)?
3
No More Looking from the Same Side of a Mostly Liquid Surface Terrestrial-based Moon
48
How would you know your floating island was losing altitude?