Could a nomadic hunting society survive in a country without wind?

This question is similar to What would happen if there was no wind?, but the lack of wind is confined to a small portion of the planet. To make things concrete, the affected region is roughly circular with a radius of about 150 km. The entire region is affected by magic that causes the wind outside to flow around the edges of the circle as if the whole area were covered by a glass dome.

To make things concrete, here are the details on the affected region:

The question is, do the rivers and other processes distribute enough water throughout the area to prevent most of it from becoming a desert in the absence of wind and rain? Or are we inevitably left with small fertile areas around the rivers and desert everywhere else? I was specifically envisioning the area as a place for small nomadic hunter-gatherer societies, so it wouldn't need to support agriculture, irrigation, etc.

They will not need to be very nomadic.

This aside from the fact that 150 km is not very big. Life in your magic circle will be next to the river. As an example here is the Amu Darya between Turkmenistan and Uzbekistan. 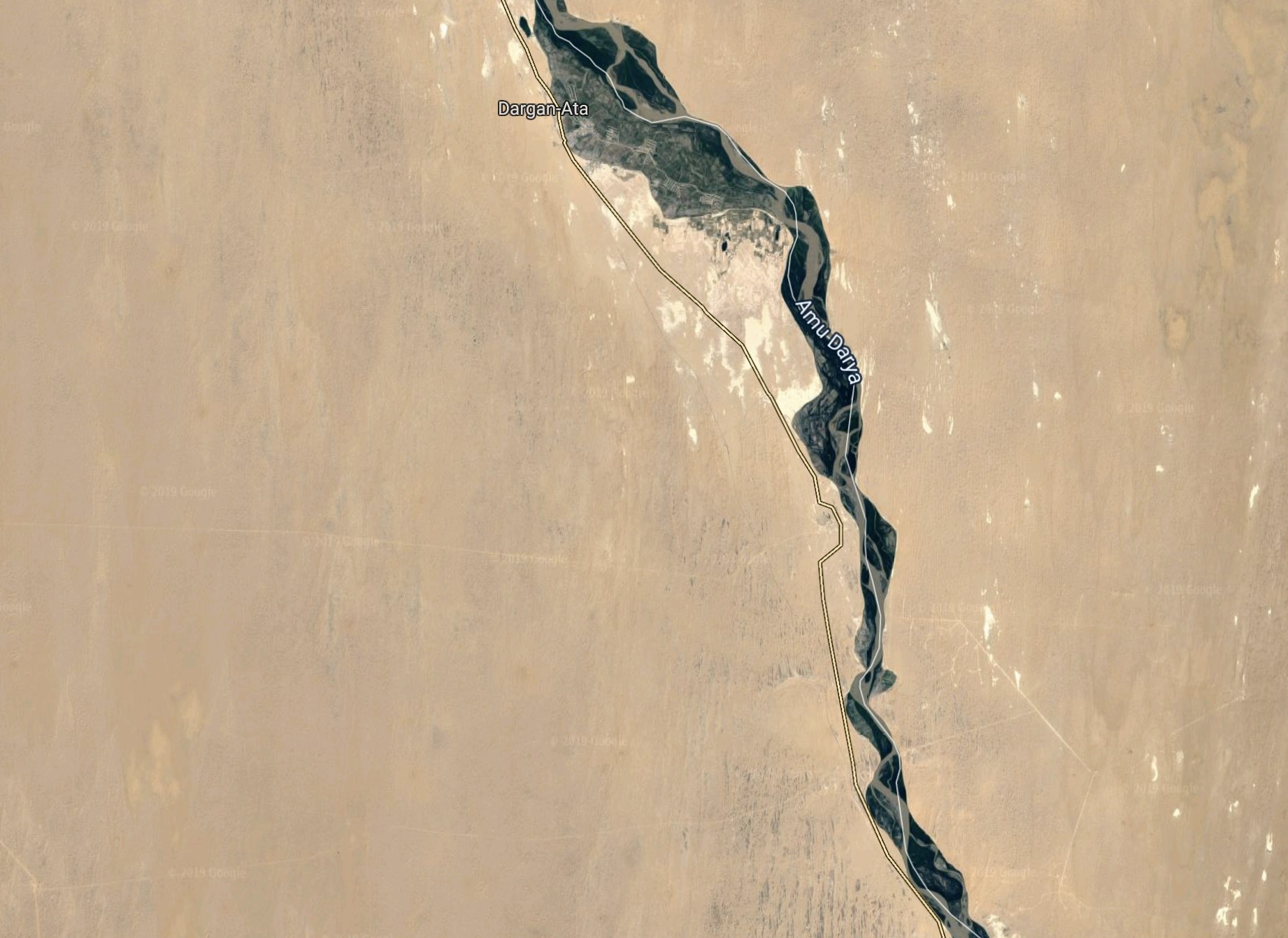 Life is clustered by the river because there is no rain in the desert. In your windless land there will be no rain and it will look like this. Your nomads can go up and down the river hunting and fishing. Or stay in one place near the river - they can use the river for irrigating crops and make fish pens.

I believe the nomadic society could survive, but further details may need to be addressed to determine their approach.

I think without any wind to bring in moisture, and no rain falling, you will only get a desert area with rivers running into, as suggested by Willk.

There is a good example of a group of people living in a desert who follow a nomadic hunter/gatherer lifestyle, the Khoi-San of Southern Africa. Even to this day they remain in the Kalahari desert and continue their nomadic cultural way of life.

As another idea for a group living in a desert type biome, you could have them be herdsmen like a lot of the indigenous tribes of Southern Africa. With a large enough herd of animals to sustain the group of people, grazing will easily become a problem if there is only vegetation along the banks of the rivers, so it would be beneficial to rather be nomadic, and move along the river with your herd once the grazing starts to disappear.

Bonus is that as a river has two banks, for half the year they can move down one side of the river, then cross it at a narrow/shallow point, and move back up in the opposite direction, allowing enough time for the vegetation to recover.

If the 150km circle is at the bottom of a crater with gentle walls climbing up on all sides and if the intensified rainfall just outside the circle slides off those walls and flows down towards the center, then the enclosed area could be anything from a desert to a swamp to a lake depending on how much rainfall naturally occurs in the area.

6
What would happen if there was no wind?

27
How can I estimate how far into a cave network breathing is possible?
8
How long would it take for consumable magic items to displace formal mages?
8
Is it possible for a temperate forest/freshwater area to form within a desert?
4
Preparing human colonists for a desert planet with a red giant
10
Determining climate and biomes in a non-planetary setting
9
Determining Planet rotation period that would allow for global Wind Cell
4
How Would Organic Material Erode If Petrified
2
Unicellular organisms evolving extremely rapidly in tiny forest ecosystems
5
Living on a Windy Rainless Hemisphere
2
How could strange energies cause massive droughts within a localized region?