Animal life on a planet orbiting a red dwarf

I am envisioning a world around a red dwarf star. The planet has violent and accelerated (due to higher geological activity) plate tectonics and has a magnetic field about 75% the strength of the Earth's. The planet (we'll call it GF10) is roughly 40% the size of the Earth. The planet used to be nearly entirely covered by oceans but they eventually evaporated.

The planet had a relatively flat surface and 80% of that surface was covered by 20% of the water found on Earth. Most of said water evaporated, making a dense atmosphere that traps heat. There is only a sea the size of South Africa running horizontally along the planetary equator.

The planet has two moons roughly the size of Phobos. Orbiting the planet elliptically. The planet is gravitationally locked and orbits widely. During the summer weeks it is in the habitable zone, but its orbit takes it dangerously close to a gas giant (as well as to the edge of the habitable zone) to the point that it is viewable from the surface.

My question is this:

How might animal life (assuming life can be relatively easily divided into animal/plant categories) evolve to live on such a world?

I might not have described the orbit correctly so here is a map.

Map of orbit (not drawn to scale): 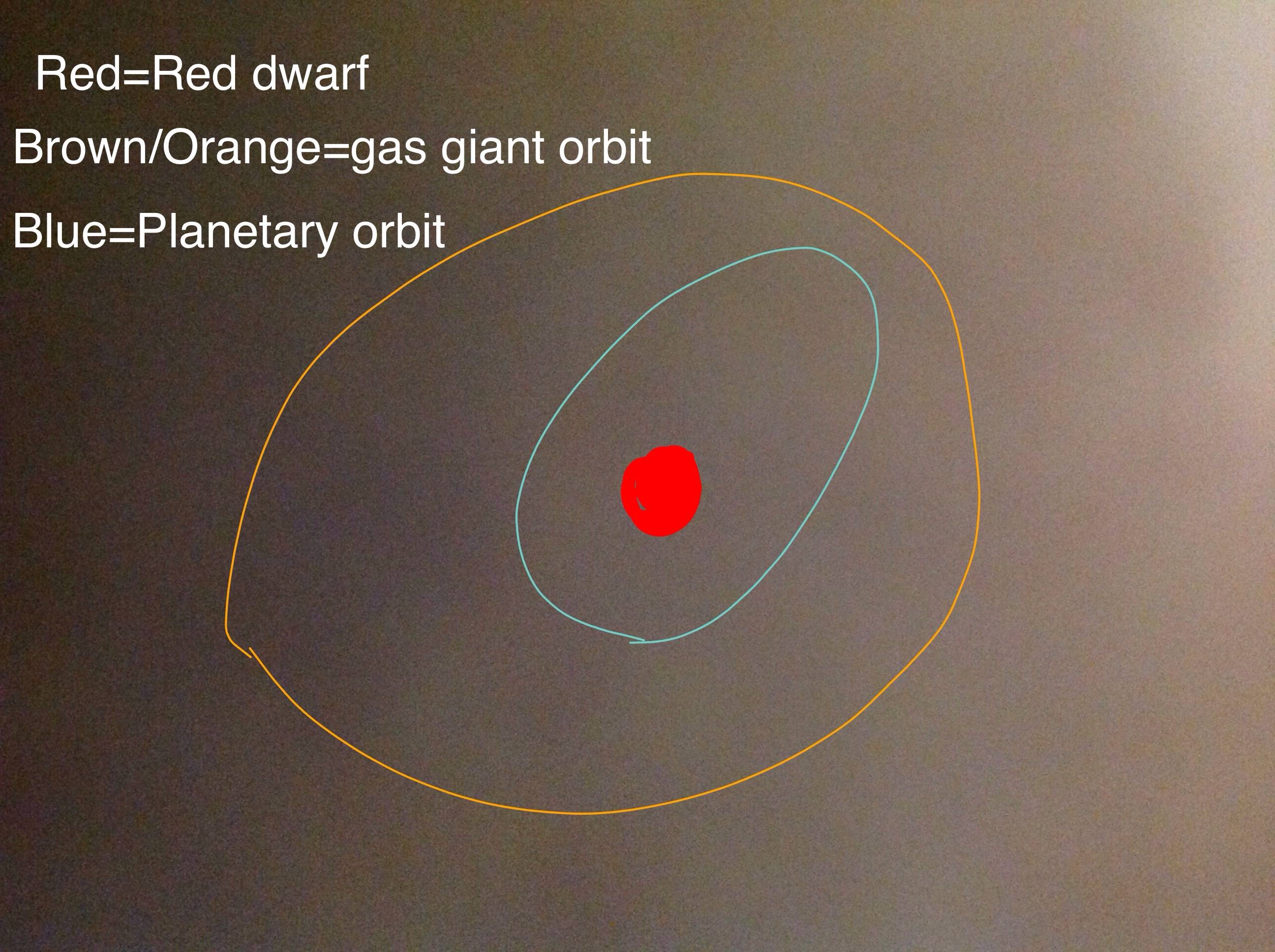 Since a Red Dwarf is a very dim star, any planet in the habitable zone will be quite close and tidally locked to the primary. The planet will have multiple ecosystem bands based on illumination, with the "hot pole" having the primary directly overhead all the way to the "cold pole" on the opposite side of the planet.

Atmospheric circulation will be fairly intense, with a permanent low pressure cell based on the hot pole and a high pressure cell at the cold pole. Since the planet does not rotate, there is no Coriolis effect to deflect the winds.

Animal life will be adapted to living in a low light environment, probably with high winds near ground level rushing towards the hot pole and equally high winds in the upper atmosphere rushing towards the cold pole. There are no day/night cycles like we have, so the creatures will probably not evolve anything like a circadian rhythm. They may end up with a brain structure similar to a dolphin, being able to "go to sleep" with one half of the brain at a time so they do not become vulnerable to predation or natural disaster.

Living in a permanent twilight, they may develop large eyes, but other forms of sensory apparatus like electrical fields, echolocation or even blind creatures using smell and touch can all be envisioned (there are probably ecological niches for every kind of creature). Flying will be very challenging, since being caught in the wind with no viable means of directing your path means being swept towards the hot or cold poles, and likely being swept out of your own ecological "band". If the winds are strong enough, the ecosystem might resemble a corral reef, with creatures anchored to the ground and extending tendrils into the air to snag pollen, sperm from male creatures or edible matter (even dust carrying minerals might be important for their metabolism.

Most of these assumptions assume a similar biochemistry to that of Earth, but adapted to more extreme conditions.

Most likely, if animal life would exists on Terra-like planets orbiting red dwarfs, they would need protection from the frequent solar flares of their red sun. To evolve, they would require protective shells. For mammals, possibly a tough layer of dead skin. They would crawl in caves or hide in the mud until the sky clears itself. The animals who couldn't find adequate shelter or lose theirs at the expense of others would be ''cooked'' and then devoured by the surviving predators after the flares would be gone.

Instead of seeing the blue reflection of the oceans, the sky would be transparent due to infra red light. The vegetation would appear in shades of dark green or even black.

Just guessing, but it's fun

7
What would be the most likely colour of leaves on plants on a planet orbiting a red dwarf?

12
A world with a moon orbiting much closer than ours
6
Could an impact crater make a world habitable?
28
An Eden-like moon orbits a barren terrestrial planet. Why is the planet barren while its moon is earthlike?
4
Looking for a review of my tidally locked red dwarf planet system specs!
9
What plant colours other than black could be available on a red dwarf planet?
5
A Stable Red Giant Trinary System
8
What color would plants orbiting a white dwarf have?
2
The major effects on the habitability of exomoons orbiting this Brown Dwarf
3
Feasibilty of binary planet having life