Ballistics of a 19.25mm revolver

All measurements of projectile and assuming pure material, there could be anything in between but let's assume these are the main three.

The lead bullet would be the one safer for humans to fire and it would do it by using the short barrel to it's advantage. Smaller bullet, quicker to accelerate, would leave the barrel with half the powder left to burn. In theory, half the push, half the velocity and half the recoil as compared to the 3000 grain bullet. Of course at the cost of wasted powder, there is no free lunch. Since the bullets have to be the same length, approximately, this is my theory as to a potential solution.

Then you have the tungsten twice the weight and almost the same size. Assume that in the world this exists there are two variants of the rifle bullet, subsonic and supersonic. Lighter is super, heavier is sub, basic physics if I'm correct. The supersonic, as detailed above, would never get up to speed in the handgun though since the subsonic will accelerate slower it just barely might. Would this work out in reality?

If the above points are reasonable takes on physics then any problems existent could be solved, at least in theory, by a different powder type for the revolver. Or alternatively just using stock rifle rounds and contenting with waste/less than optimal performance. And as near as I can understand, with this I've reduced the problem to just the powder. This being scifi I can just leave the specifics for that in the air.

All of this could fit in a modified 50 BMG case and a 5" long cylinder, again assuming some liberty with the exact science of powder.

The specific compound for the smokeless powder would be getting into the actual science, a deep dive impossible to calculate. Bullet shape is either a flat top cylinder or a spitzer equivalent in size. Assume ideal range to be 40 yards maximum out of the revolver.

The exact question is a reality check on my assumptions, are they reasonable? Realistic?

Previous question to the same effect about the handguns themselves, Could a 19.25mm revolver actually exist?

A shortish, flat-nosed bullet is known in the shooting world as a "wadcutter". They've been favored ammunition for paper target shooting for roundly a century, largely because the flat nose cuts a neat, circular hole in a paper target, even if it's hanging free with no backing (pointed or round nosed bullets, by contract, leave a ragged hole that's harder to score).

They do not tumble oddly, at least if there's enough spin from rifling to stabilize them in flight -- and the wider a bullet is relative to its length, the less spin it needs to stabilize. Making your heavy bullet a wadcutter makes sense in this context, as adding weight by simply making it longer will make it prone to tumbling in flight ("keyholing", so called because the hole in the target is oblong, rather like the keyhole for an old fashioned warded lock). Wadcutters are also very effective at transferring energy on impact, because the blunt nose creates huge drag forces in fluids (under these conditions, flesh is a fluid). It's also less prone to deflection on striking a hard object (like cyborg enhancements or robotic bodies).

Given a cartridge proportioned similar to a .357 Magnum or .45 Colt, but enlarged to your 19.25 mm dimension (making it close to a short 8 Ga. shotshell in overall dimension), the original might well have been a black powder round (as was the case with .45 Colt), but newer guns and cases might have enabled the modern ballistics to fire the tungsten bullet at reasonable velocity with smokeless powder -- and you don't need to say anything more about the powder than "smokeless".

Reloaders would be the only ones to care about how much and what kind, anyway, and they'll recognize that this isn't the venue for that level of detail.

BTW, your tungsten would need a coating of something softer in order to take rifling -- casting tungsten cores into a lead slug would allow increasing the density while protecting the rifling in the barrel. Copper driving bands, shrunk into grooves in the bullet, would also work to spin the bullet, seal the grooves, and protect the bore from the hard tungsten.

One thing to be aware of, however, is that bullets need some length of bore engagement to assure that they start into the rifling straight (vs. winding up with an off-axis spin); hollow bases are very commonly used to make light bullets longer. For instance, in .38 Special, where the shortest common full wadcutter is 148 grains, it's possible to make a hollow base wadcutter with similar bearing area as light as about 100 grains. This isn't usually done, in this case, because wadcutters are normally kept subsonic and a combination of factors make 148 grains a very common bullet weight for .38 Special.

Generally, from ballistics perspective, bullet works better if it's longer then it's wide. A cylindrical stubby bullet with flat nose would, most likely, drop very fast and tumble in a weird way.

It means that you can easily make your bullets much longer, so that you won't need high density materials like lead and tungsten. (From what I know, lead wouldn't be so good for a high-energy round, it's soft, and it will foul the rifling significantly). It also has some basis in history - I've found info on two WWI aircraft cannon rounds, 20mm in caliber, only slightly necked, which were of about the same dimensions as your proposed round overall, with the bullet (actually, high-explosive shell) being almost as long as a cartridge. Erhard and Becker. Also there this Soviet WW2 straight-walled aircraft cannon cartridge with a shorter bullet.

I do not think you need to specify the composition of the bullet and it's precise dimensions, unless you want to. The weight you give should work, the muzzle velocities check out. As we discussed before, it's so hard to figure out the mass and volume of the propellant that it's not a problem. From a glance, your cartridge seems to have enough space for necessary amount of it, and that's good. Just make a bullet longer and at least somewhat pointed.

tldr; This is a stupid idea but other people have been just as stupid in reality.

Here is an image of a 20mm round (blue top, ammo in the background is .50 BMG) It is usually used in vehicle based cannons and anti aircraft guns (see this), however a couple anti-material rifles do use it. However just like the AA guns, the anti material rifles are impractical for any sort of anti-infantry use. Take the Anzio 20mm rifle (in the background you can see a smaller anti-material rifle chambered for .50 BMG), it weights 130 pounds (59 kg). It is not the case that a lighter version could not be made, it is intentionally heavy to absorb some of the 47 kilojoules of muzzle energy and so that the gun would be fireable more than a couple times (For comparison 5.56mm Nato has 1,755 J of muzzle energy).

However, since you haven't given me certain metrics of the bullet, I will try and fudge some numbers to make it as realistic as possible. If we can compromise the size a little, 15.7mm aka .600 Nitro Express is closer to a semi-reasonable a reasonable cartridge (~3/4 in diameter but ~2/3 of area). The bullet comes in at 900 gr, exiting at 620 m/s, for a muzzle energy of 11,400 J. Even thou this cartridge is usually fired from a 16 pound rifle, there is one monstrosity of a revolver chambered for .600 Nitro Express. 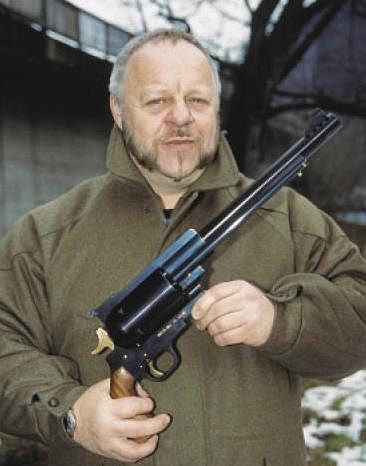 This brings us to the Pfeifer Zeliska .600 Nitro Express revolver. While technically possible to build a revolver chambered for this massive caliber, it isn't gonna be thing close to smooth. For one it is huge, it is 2 inches away from being as long as an AKS-47 when the stock is folded. It also weighs 13 pounds, which is the weight of 2 M4 Carbines. Despite the weight, it still has enormous recoil, even from a bench rest. The revolver is single action only, this means you have to pull back the hammer every time you want to shoot (I would suggest fanning the hammer but I don't think that would be possible with the amount of weight and recoil involved)

Stuart Cloete, sniping officer for the King's Own Yorkshire Light Infantry, stated "We used a heavy sporting rifle - a .600 Express. These had been donated to the army by big game hunters and when we hit a plate we stove it right in. But it had to be fired standing or from a kneeling position to take up the recoil. The first man who fired it from the prone position had his collar bone broken."

In terms of terminal ballistics this round would be able to easily take out anything living (see Anecdote 2), penetrate cinder-block walls (similar to .50 BMG), and destroy light armored vehicles.

The .600 Nitro Express, along with the .577 Nitro Express, was a specialist backup weapon for professional elephant hunters. Too heavy to be carried all day and used effectively, it was usually carried by a gun bearer. It was used when in thick cover and when an effective shot at the heart and lungs was not possible.

John "Pondoro" Taylor once said the shock of a head shot from a .600 Nitro Express bullet is enough to knock an elephant out for up to half an hour.

While other large bullets such as .50 BMG have been used effectively from ~1800m with the M2 Browning. While both .50 BMG and .600 Action Express would have the advantage of a high ballistic coefficient (trajectory suffers less "drift" from cross-winds), the .600 is a much less aerodynamic making it much less accurate. The M2 Browning also makes up for some the mechanical persuasion it lacks compared to traditional sniper rifles by being mounted on a tripod and having a large weight to reduce recoil, the .600 Revolver would not see these benefits.

If I had to use one, I would put a stock on it like a revolver carbine or use a 1 point sling for tension (Yes, some revolvers have slings) and have a tank style muzzle break

Not the answer you're looking for? Browse other questions tagged reality-check technology physics weapons engineering .

34
Would England of the 14th Century be capable of producing revolver bullets
2
Creating a steampunk-esque/cybernetic "Big Iron" revolver
25
Could a 19.25mm revolver actually exist?
8
Feasibility/Logistics of equipping an army with revolver rifles
5
How much power/pressure would be required for air weapons to be as deadly as fire weapons?