Rotation period of a planet around a star (sun)

Is it possible for a planet to be much further away from its star than earth is from the sun (because for example the star is much brighter/Hotter) yet still have a comparable (as in not tens if not hundreds or thousands of times longer) year and day length to earth?

P.S. To clarify this question somewhat. This question comes sorta as a follow up to a question i once asked regarding a planet orbiting a Blue Supergiant star. But with the distance required to give the planet an earth like climate it would have such a huge orbit that 1 year on this world would take a little more than 13 ''Earth'' centuries wich would end with me having to make the race on this world basically immortal compared to humans or give them a livespan that (using this world's timespans and still using earth like 12 months a year) would mean that the average lifespan of a person would be less than 1 month.

Yes, it is possible. Day length is only effected by how fast the planet rotates. This is unrelated to the orbit.

Year length increases as your orbit gets bigger, and decreases as your star gets bigger. The heavier the star is, the faster your have to orbit to stay a certain distance away. The farther away the planet is, the slower it orbits. You can have an orbit of practically any period given the correct stellar mass and orbital altitude.

I don't know how this alters the heating issues though. It's possible that the habitable zone around this larger star would not be at the correct altitude.

It's already been stated but length of day just depends on the period of rotation, which has no relation to the celestial mechanics. Well, there are some special cases where that isn't entirely true, but they are fringe cases and not pertinent to your question. So choose the length of day at your leisure.

For length of year we need a wee bit of math. Kepler's laws are the foundation on which celestial mechanics is done. Kepler's third law can be stated mathematically as

If we add your constraint that the length of the year is the same as the length of an Earth year, we can rearrange to solve for mass

If we plot this, we can see the relationship as semi major axis increases: 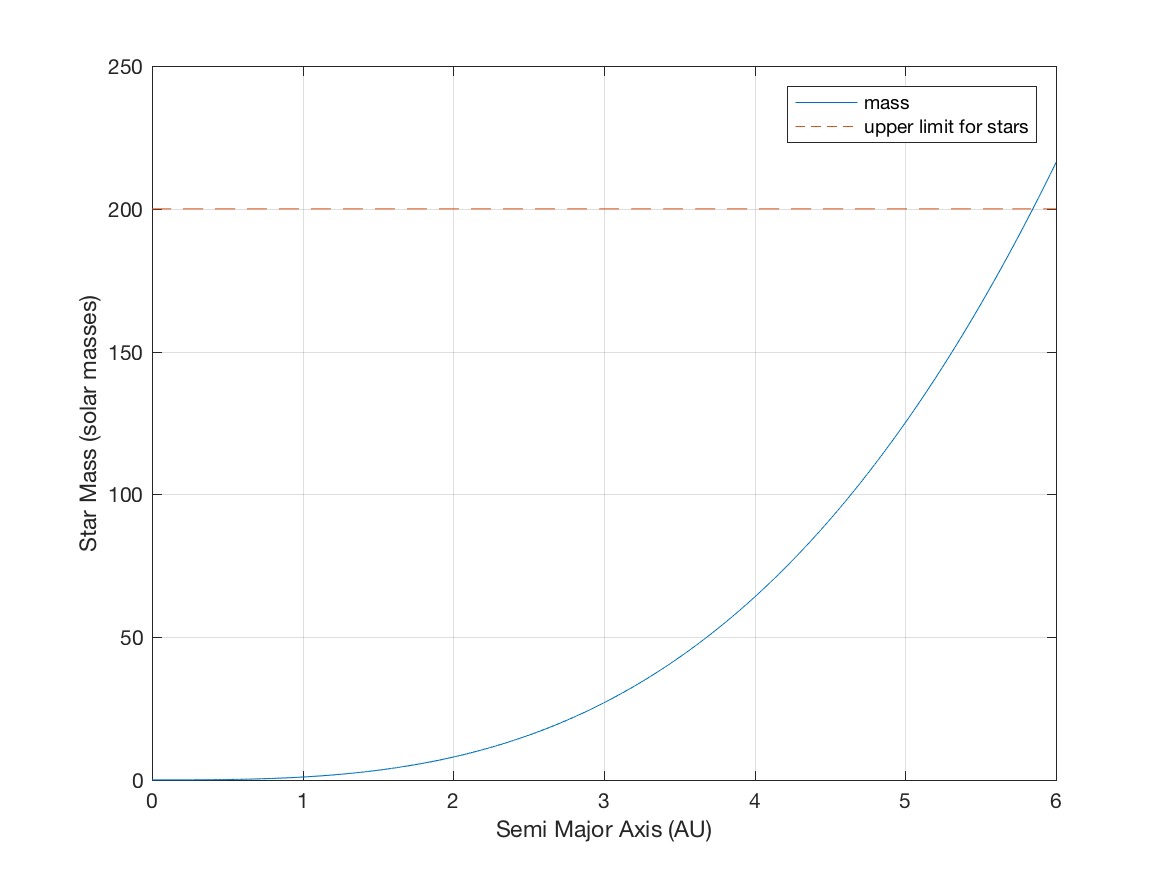 *Note that the lower limit on mass for stars is something like 0.1 solar mass.

**Also note that semi major axis is identical to orbital radius if it is a circular orbit.

If you want to also examine the amount of energy that would be received at these specified distances and star masses you would need to use some relations for how star energy output varies with mass and how solar flux varies with distance. But that seems like a whole other question.

First of all, the day lenght has nothing to do with the distance from the star. It only depends on the time it takes for the star to cross the same sky meridian.

Then, by changing the eccentricity of the orbit, you can have the planet be further away from the star for a longer time than it is closer, while keeping the year length the same.

Day length is no problem. Orbital period is.

Day length mainly depends on how quickly a planet rotates around its own axis, modified slightly by its orbital period. There is nothing preventing a planet far from its sun to rotate at this speed. (The opposite is not true; a planet very close to its sun is likely to be tidally locked or in spin-orbit resonance).

Having the same year length when much farther out is quite a lot more difficult. As a general rule for stars of masses near that of the sun, the luminosity of a star is proportional to its mass to the fourth power, meaning that a planet's distance from its star to achieve the same amount of heat would be proportional to the square of the mass. For stars between 2 and twenty solar masses, luminosity is proportional to the mass to the power of 3.5; not that different. For stars above 55 solar masses, the relationship between mass and luminosity becomes linear, but such stars don't last very long because of strong solar winds and are unlikely to develop planets with life.

To achieve a similar year at a far greater distance (meaning a far heavier sun), you would need a stellar object with very little radiation compared to its mass. A possible solution would be a sun in close orbit around an even more masssive black hole, with your planet orbiting far from this pair.

Say that this star has twenty times the mass of our sun. It would have roughly 50,000 times the luminosity of our sun, so your planet would have to be roughly 225 times the distance of Earth from the sun to receive the same amount of sunlight. The mass of the black hole would hence have to be 11.4 million solar masses for the planet to have the same orbital period. This is a supermassive black hole, about three times more massive than the one at the center of our galaxy (but smaller than some in other galaxies).

Say that the star instead is only 5 solar masses, with a luminosity ca. 400 times that of our sun. The orbital distance of your planet would then have to be 20 times that of Earth's to receive the same heat; about the same as Uranus' orbit. The mass of the black hole would then 'only' have to be 8,000 solar masses; much more manageable. Whether black holes of this mass exist; between supermassive and stellar black holes; is unknown.

11
Earth-like planet orbiting neutron star?
2
Orbital period of a tidally-locked Earth-like planet around a red dwarf
10
The (Alternative) Reason for the Seasons, Part 2: Variable Star
7
Is this circumbinary planet set up in a stable manner?
8
Habitable zone around a Blue Supergiant
7
Realistic ways a Planet or Large Moon could have Variable Day/Night periods
3
Ideal sun type and corresponding effects for a terrestrial planet with 256 days in a year?
8
Can Multiple Stars Naturally Merge Into One New Star?