Could Xenarthrans Be Ferried Outside South America?

Right from the beginning, the xenarthrans--armadillos, sloths and anteaters--have been at a disadvantage. For the longest time, their home was an island continent, which made them extremely vulnerable to outside environmental changes. Case in point--the American Interchange caused by the bridging of Panama less than three million years ago. As quoted in Wikipedia:

During the Cenozoic, North America was periodically connected to Eurasia via Beringia, allowing repeated migrations back and forth to unite the faunas of the two continents.[n 21] Eurasia was connected in turn to Africa, which contributed further to the species that made their way to North America.[n 22] South America, on the other hand, was connected only to Antarctica and Australia, two much smaller and less hospitable continents, and only in the early Cenozoic. Moreover, this land connection does not seem to have carried much traffic (apparently no mammals other than marsupials and perhaps a few monotremes ever migrated by this route), particularly in the direction of South America. This means that Northern Hemisphere species arose over a land area roughly six times greater than was available to South American species. North American species were thus products of a larger and more competitive arena,[n 23][69][89][90] where evolution would have proceeded more rapidly. They tended to be more efficient and brainier,[n 24][n 25] generally able to outrun and outwit their South American counterparts, who were products of an evolutionary backwater. These advantages can be clearly seen in the cases of ungulates and their predators, where South American forms were replaced wholesale by the invaders.

Unfortunate in the long term, so how could we toughen them up? Why, give them more space to roam at a far earlier date. (Could put them in ecological crossfire with the rodents and eulipotyphlans, but that's not relevant to the question here.) Fortunately, we have an idea on which directions some particular ocean currents took during the Eocene: 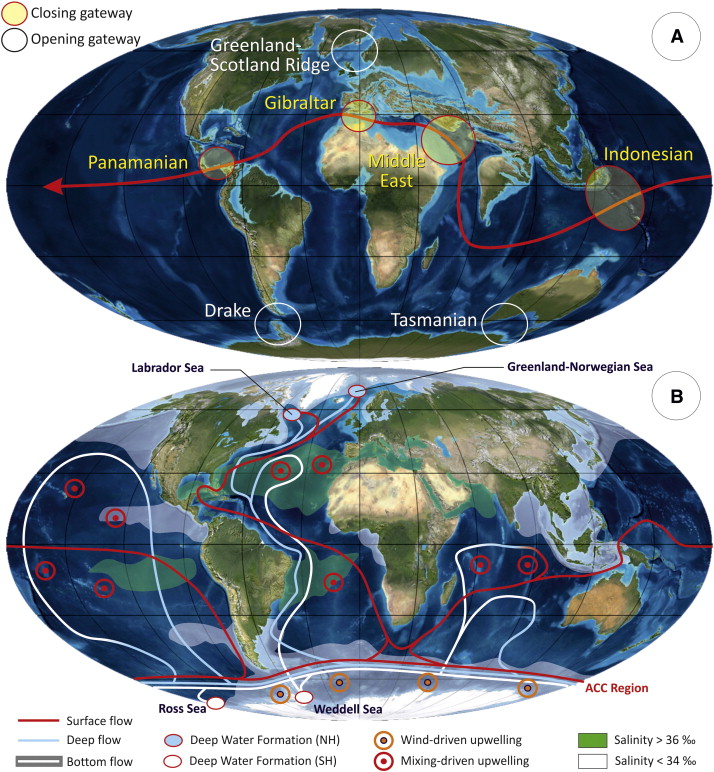 The current was very close to South America at the time, and if we look really closely, we can see that the Panamanian Land Bridge had just started to emerge. Now the question is: Could that current ferry the armadillos and sloths outside of South America to colonize other lands long before the Great American Interchange?

While I wish them no disrespect, there are a few mistakes in Bellerophon's answer. First of all - rafting migration most certainly does happen, and has happened many many times in Earth's history. It brought carnivores and tenrecs to Madagascar, histricomorph rodents, monkeys and amphisbaenians to the Americas, and iguanas to the South Pacific. Oceanic dispersal is a very common method of migration. 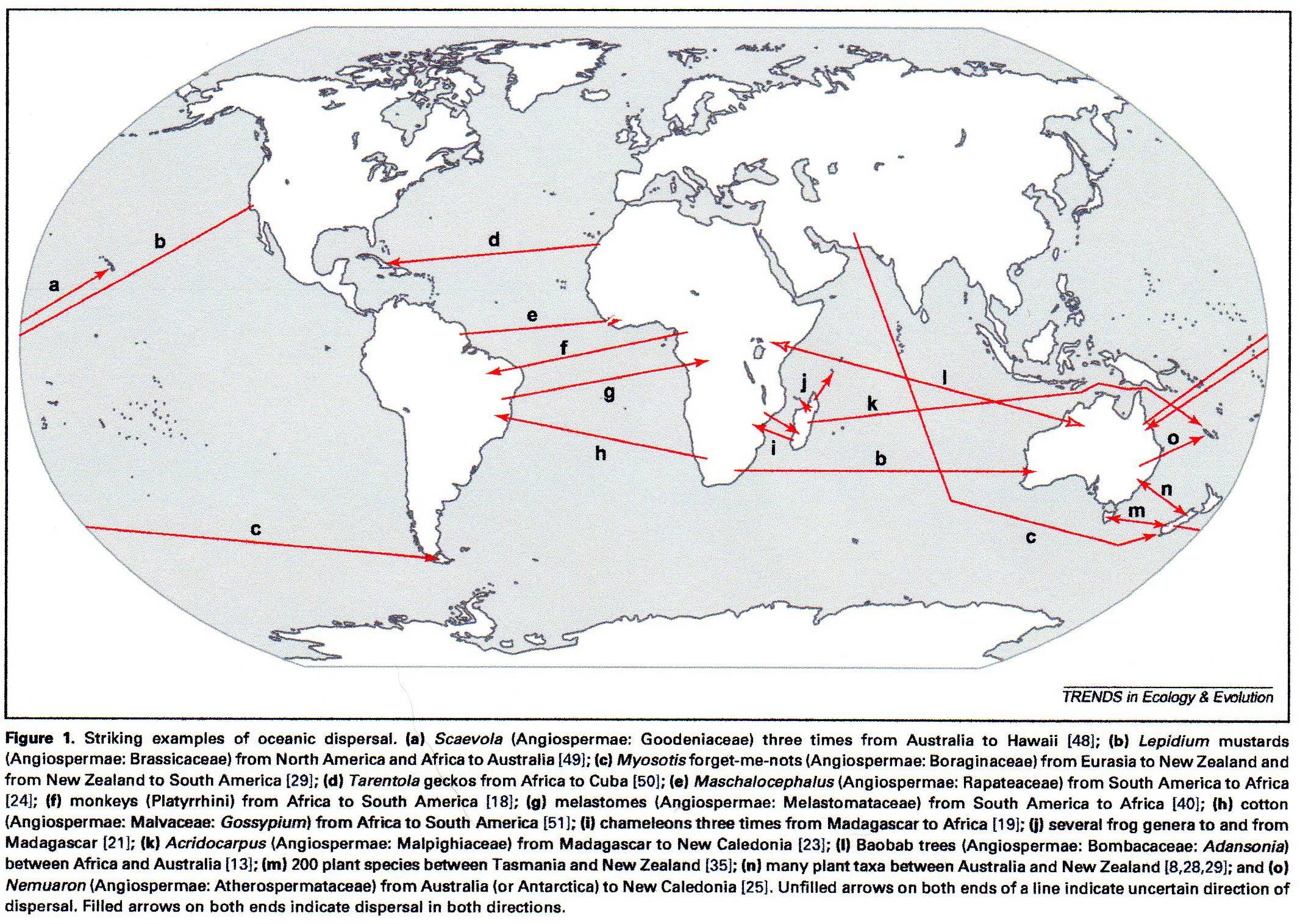 Furthermore, we know that rafting events out of South America have happened before - examples include:

Another error I believe the other answerer has made is the nature of oceanic dispersal. While it can be done by swimming, it seems a more common phenomenon is that organisms are carried aboard large mats of floating vegetation, washed out to sea by rivers - the Amazon commonly belches out such rafts, often of huge sizes. This also solves the food problem - a large raft could easily provide enough vegetation to supply the migrants for a long journey.

If we want to get technical about it, I can do some rough calculations. There's no data on the speed of this Eocene surface current, so I'll just assume that of a typical modern current - nine kilometres per hour, a la the Gulf Stream. Looking at a map of the Eocene world and comparing it to a modern one, I did a rough calculation that the distance from Eocene South America to the easternmost Southeast Asian islands of the time to be about 16,000 kilometres.

It would take 1777 hours, or a bit over 2 months, to traverse 16,000 km at 9 km/h.The field metabolic rate of the three-toed sloth is a measly 38 kilocalories per day, so it'd need 2,812 kilocalories for the whole trip. An average leaf contains roughly 1 kilocalorie for every 5 grams, so there would need to be at least 14 kilograms of leaves on the raft. That is not a stretch of the imagination whatsoever - some vegetation mats are multiton giants.

So, in short, the answer is absolutely yes.

Firstly as far as I know no land animals have ever colonised somewhere using ocean currents. While this doesn't mean it can't happen it does suggest it would be very unusual.

Another reason to doubt the possibility is that whilee ocean current passes close enough to the top of South America that a passing sloth might wander into the sea and swim into the current the next land it passes near is probably Gibraltar. There is a possibility of the sloth making landfall on some islands in South East Asia but we need the sloths to acess more land than a few islands. This gives a trip of somewhere around 30000 km. The fastest ocean current goes at around 10kmh so its going to take at least a third of a year to make the trip. Sloths have a slow metabolism but I doubt they can go for a third of a year without eating. Armadillos won't fare much better as they can't store much fat they are unlikely to have the reserves to make the journey.

Not the answer you're looking for? Browse other questions tagged reality-check evolution alternate-history mammals currents or ask your own question.

4
Could Meridiungulates Colonize The World Before the Opening of Panama?

9
What American animals would have been domesticated had they not gone extinct?
9
The Science of the Marsupilami
37
How would the indigenous peoples of North America have developed in the absense of the Europeans?
11
What would cause termites to be the dominant herbivores on a savanna?
1
Freezing Technology at a Civil War Level for 200 Years
4
Life in the Northern Hemisphere if Beringia Never Drowned
9
A Permanent Norse Presence in America, Part II: How Would Europe React to This?
16
Is it possible for underground bunkers on different continents to be connected?
4
Could Meridiungulates Colonize The World Before the Opening of Panama?