With the story I'm writing I really want to find an accurate place to set up a school (preferably in New York) that was originally a safe place to go to during the Salem Witch Trials.

I'm hoping to place it somewhere quiet and on the down low but if the city is the only place then that will do too.

About Rev. Thomas Parker, of Newbury

"Parker, together with his cousin Rev. James Noyes, his nephew Rev. John Woodbridge, and some others, obtained leave of the general court to remove to Quascacunquen at the mouth of the Merrimack River, and the settlement was incorporated as a township under the name of Newbury or Newberry in the spring of 1635. Noyes was chosen teacher and Parker first pastor of the church, the tenth established in the colony. He remained at Newbury for the rest of his life, "the beauty, holiness, charity, and humbleness of his life," says Cotton Mather, "giving his people a perpetual and most lively commentary on his doctrine."..

With Noyes, Parker also prepared students for Harvard, refusing all compensation for his services. On John Woodbridge's return from England in 1663, he was made assistant to Parker, who had complained of failing eyesight in 1643, and towards the end of his life became quite blind. His blindness did not prevent Parker from continuing to teach, usually twelve or fourteen pupils at the James Noyes House, where he lived with Noyes. He taught languages with ease from memory... https://www.geni.com/people/Rev-Thomas-Parker-of-Newbury/6000000041034541209

Thomas Parker and James Noyes were real people and respected Puritans. At the time of the Salem trials their school was up and running and both men would have been considered beyond reproach. Parker would probably have been blind at that time but still teaching.

Also good for your story: there lived a proven witch in Newbury at the time of the Salem trials and contemporaneous with Parker and Noyes: Elizabeth Morse. 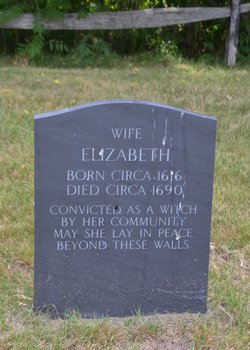 The Newbury trial predates the Salem witch trials and Morse was sentenced to death as a witch. Somehow she got a reprieve and it is not clear to me exactly how. For a story you could have an intervention by Parker and Noyes be the reason for the reprieve - she was still a witch but was allowed to live, although not be buried in hallowed ground.

This approach uses real people and real history which makes the whole thing seem more real. Persons in Salem frightened by the trials might seek refuge with Parker and Noyes who were respected Puritans, not that far away in Newbury, and who had a track record of saving at least one witch. Noyes and Parker make fine characters and so does Mrs Morse, the witch imprisoned in her home.

The real Parker and Noyes had both died a few years before the events in Salem. For a fiction, I think it is OK (and maybe even prudent) to take inspiration from these real people but slide their time forward a few years and change their names a little.

The further your characters are from the influence of the Puritan culture the more "tolerant" the city folk will be. New Amsterdam was just transitioning to the English at the time of the Salem Witch Trials. And, the Dutch have long been a cosmopolitan people, in my opinion, they get on with just about everybody. Another alternative would be Quebec City, settled by the French. In a few years, in 1718, they'd settle New Orleans, so you'd think that Quebec and there other early French settlements would have not had such the strong sense that the devil was in everything and everywhere.

I wouldn't think any place settled by Spain would be welcoming, at all, given their history with the inquisition and close adherence to the papacy in that time frame.

And, the western wilderness amongst the Mohawk tribes, or others, might have been a safe haven since a school for witches would have things to trade with local tribes -- curing illness, hexing other competing tribes, selling the blankets -- not teaming with Small Pox.

The Salem Witch Trials were a fairly small event, in terms of geography. The trials only happened in Salem and a few outlying villages. You would not have to go far to hide from them. You wouldn't even need to leave Massachusetts.

They also only lasted about a year. Doesn't really seem like enough time to set up a school or safe haven.

Not the answer you're looking for? Browse other questions tagged magic environment culture super-powers or ask your own question.

5
A Shining Beacon of Modernity and Hatred
19
How to create the eternal storm?
1
D&D Campaign - Closing off a Mountain Pass with Explosives
3
How would a group of floating medieval kingdoms sustain themselves
3
How would humanity organize long distance communication using an astral projection power?
3
What could a non-expert blacksmith from a small village do to secure a job in a city?
2
How to erase the cultural memory of post-apocalypse survivors
1
How long or how hard is it to develop a medieval fantasy into a modern or even sci-fi civilization.?