There is a forest in my world with a special property: All the trees are optimised to shade as much as possible during summer and give as little shadow as possible during winter, to regulate the temperature of the ground through sunlight.

Is it possible to have such a spindly tree with large leaves?

My concern is not how this is possible, but how a tree could develop to have as little stem and branches as possible while maximising the surface of foliage.

The trees in our world aren't 'built' with this shadow-reduction in mind, which is why I ask whether it would be possible.

I could imagine structural integrity being a concern, but perhaps one could work around that?

PS: Should I make this an "Anatomically Correct" question?

You presumably want large leaves because they might shade better, but you can shade just as well with a denser canopy of smaller leaves. You presumably want really thin spindly trees to maximise the amount of sunlight that can reach the ground in winter, but that present a bit of a structural issue. For a start, what would happen in strong winds? Nothing good, I suspect.

So let me suggest three other possible choices. (I hope its ok to put multiple answers in one answer!)

Do you know what the best way is to maximise the amount of sunlight reaching the ground in winter? Get rid of all the trunks entirely. Why not invent something a little like bamboo, which grows densely and rapidly in the spring but unlike real bamboo it flowers, seeds and dies before the year is out. Maybe it grows from a dense underground rhizome so it doesn't really "die" each year as such... only the above ground portion withers away.

Bamboo can be pretty dense already in real life; it wouldn't require much tweaking to make it even better for the purposes you'd like. Maybe fill your forest with hibernatory panda-analogues which help eat all the annual shoots. 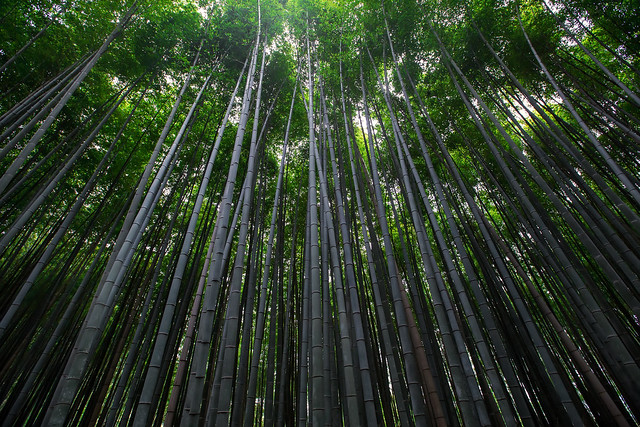 Sunlight reaching the ground is absolutely not the only thing that affects temperature. Consider most equatorial deserts... baking hot during the day under that intense sun, but pretty cold at night because all the heat radiates away.

What might be useful, then, is the opposite of conventional nyctinasty, a process whereby plants close up leaves and/or flowers overnight. Instead, your thermoregulatory plants don't shed their leaves in winter, like a deciduous tree might (which is another simple answer to your question, incidentally), but instead keep them as a sort of zombie canopy that isn't used for photosynthesis. The leaves fold shut during the day, allowing sunlight to reach the ground, then spread out again during the night to help trap a layer of warmer air. If the canopy is dense enough, this will have a measurable effect.

This wouldn't be recommended anywhere which gets really cold, or experiences significant snowfall, because those leaves could freeze and break off, rendering them useless, or the accumulated load of snow could easily causes branches or whole trees to break.

(this shows thigmonasty rather than nyctinasty, but the movement is indicative of what what leaves are capable of)

A single skinny trunk has structural problems, but these can be worked around if you have an aerial root system and/or stolons (also known as runners) that give your plant multiple separate props spread around in an area. A real world plant which is a little like this is the banyan tree, a sort of vine that can eventually form thick, woody trunks and descending roots from cross-branches so one plant can look like a whole grove of interlinked trees. Real world banyans have quite thick trunks, but the same strategy could be used for thinner structural members, I'm sure. 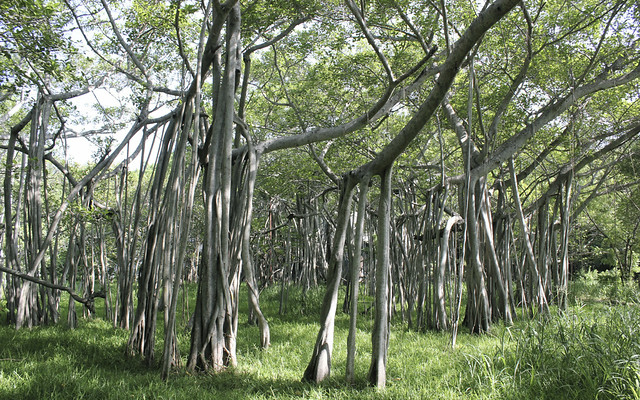 I goofed and got my seasons reversed initially. The OP, as some kind commenter pointed out, wants cool summers and warm winters. This is a much harder problem. The plant needs to absorb light to get energy.

Leaves only absorb the light they can actually use for photosynthesis, and reflect the rest. Typically plants only use a few percent of the incoming energy, so they could be nearly white. This would in effect make vegetated areas about as reflective as dirty snow. Call it 85%.

The circulation of these plants is active, possibly even having 'hearts' that rapidly move sap between leaves and roots. Excess summer heat is used to warm the entire root zone. Couple this with deep rooted varieties, and you have the thermal mass of 10 meters of earth. Earth runs about 1/3 that of water on a per volume basis for each storage. So, about 700 BTU/cubic meter/degree F. If you can get a 20 degree differential between winter and summer. (about the same as surface soil temp changes) you have 14000 BTU per square meter.

So the earth heat sponge holds about a month's worth of solar energy. This is sufficient to warm up your winters a bit and cool off your summers a bit. Basically you are converting a continental climate into a somewhat more maritime one.

Ok. Time for some heavier ammunition.

Your oceans are filled with filiment shaped algae that are somewhat stiff. They are like kelp, and live vertically. But they pump heat from the surface deep into the water. The net result is that you warm the top 50 meters of ocean. This holds about 15 times the amount of heat tht plants on land do. Side effect of this: You may have some extreme hurricanes from hot surface waters.

This already is what trees do. Look at the forest floor of a spruce forest. It's DARK dark enough that almost nothing grows there. Human eye adapts to low light quite well, so it doesn't seem that the light level in a forest is only 1/20 or less than in full sun.

All you really need is a variant of chlorophyll that doesn't reflect green light. Easy to make the entire planet dark grey.

To get the opposite effect in winter, the trees have white bark, and the leaves on the ground decompose into a white pigment.

Not sure how you want to handle oceans. Could have black algae for summer, but when light levels are low, it reverts to white.

Not the answer you're looking for? Browse other questions tagged reality-check biology creature-design flora .

14
Can a plant evolve to give off CO2?
7
Could Bamboos Evolve Into Trees In the Past?
11
Designing a carnivorous plant
9
How to design a hyper-coffee plant
2
Viability of animal plant? (Energy calculation)
5
Bootstrapping first metals and electricity without help of "easy" fire
6
How much water could the Crown Chalice hold as it grows on high-up tree branches?
11
Could a plant capture a person?
2
How could a plant mimic sound?