Would intelligence affect the evolution of colorful display patters for attracting mates?

On another planet there is a group of organisms that have colorful display patterns allowing them to attract mates. Eventually a branch of this type of organism evolves the intelligence of early humans.

There have been some research activities in the past that deal with identical twins and the partners they select. Skipping past all the detail and to the point, it would appear that in humans, the selection of a partner is inherently random. Often the twin doesn't actually like the partner of the other twin.

This to me makes sense when you consider the 'three brain model' of neurophysiology. In that model, the human brain is made up of three 'layers'; the cerebellum that manages instinct, autonomic functions like keeping the heart beating and muscle control; the limbic system (reptilian brain) that manages emotions, and; the cerebral cortex (mammalian brain) which handles higher reasoning, abstracted problem solving etc. It is the cerebral cortex that is responsible for our sentience, but it is the cerebellum that is responsible for sexual attraction and drives.

So; what about your aliens? They can't have the same brain structure, surely? They evolved in completely different ways, right?

Well, actually we can expect a layered approach to brain development in aliens because their evolutionary model is going to have to deal with the same two problems that Earth based evolution had to deal with;

1) Nature prefers efficiency, therefore does not reward needlessly complex structures
2) You can't just put a species' brain function on hold for a thousand generations to redesign it for a more complex environment

Another way of putting this is that in the early stages of evolution, autonomic functions and muscle control are all you really need a brain to do, so evolution doesn't design something that can be extended beyond that to any great degree. As the need for emotions come into play, newer systems that operate differently but intrude on the neural process of the first evolve, then more and more.

Your aliens may only have a 2 brain model, they may have a 6 brain model. But, it's highly unlikely that they achieve sentience with a single brain construct so to speak.

This is important because sex is (to be blunt) a critical factor in very early evolutionary survival, but intelligence isn't. Therefore, it is safe to say that while intelligence may play a factor in mate selection later in the evolutionary ladder, it does not preclude the use of bright or large displays either. As such, intelligence isn't likely to impact display behaviours and plumage (to use a word that over-simplifies the display constructs that may evolve).

There is a single caveat to this; brains capable of intelligence are very resource intensive and therefore only evolve where this massive cost in energy results in a net benefit. In humans, the brain consumes around 25% of the energy intake of the average person, which in a simple instinctive fight or flight environment could be put to better use. This is also why beanies keep you warm in the snow; a lot of the heat loss in the human body occurs from heat radiating out of the head because of what the brain is doing.

Displays also require a lot of energy either to create (peacock feathers), display (blood flushing) or enact (dancing style presentations). As such, on some planets, the species may have to make a choice, evolutionarily speaking. It can either continue to present but limit neural development, or enhance neural development at the cost of display. To do the latter, displays of intelligence MUST be prioritised by their version of a cerebellum for mate attraction, otherwise the plumage will always out-do the mental display.

In any event, intelligence doesn't automatically override the plumage per se; ultimately if the energy cost of managing both is possible, it will happen but it is important to note that both have a large energy requirement that evolution has to somehow reconcile.

There could be a link. Imagine early specimens evolving colorful patterns to avoid predators by confusing them. Also in this species, male should protect the mother and the young. Thus, having colorful patterns is a genetic advantage. Over time, females will be attracted to males displaying colorful patterns, which will select the ones with the patterns. Again after so much time, some members mutates to a point where they could involuntarily change the color. This is another advantage to confuse predators even more. Which in turn attracts the mates.

Finally, being able to control when and how to change color provides even more attraction, which also requires some degree of intelligence. The social structure of the species slowly evolves around the feature. More intelligent specimens will have more impressive display of patterns and colors, winning the mates. Thus you will have intelligent species displaying colorful patterns that also they have control over it, evolving naturally.

Intelligence in the service of aesthetics can accomplish wonders.

Behold: the bower of the bowerbird. 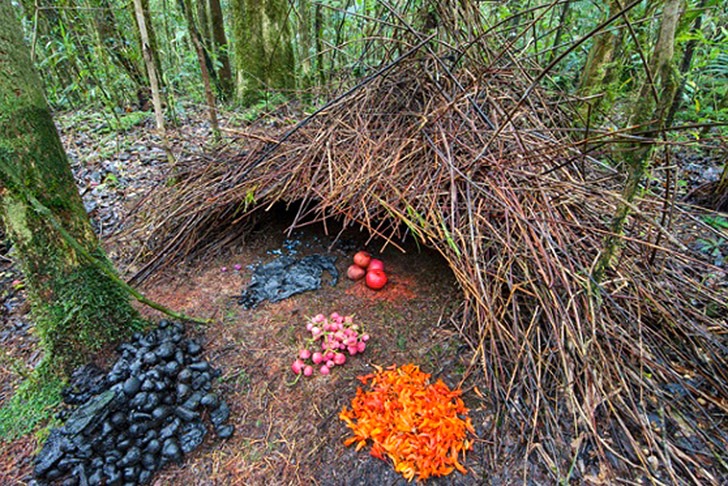 If ever there were a colorful display pattern, this is it. There is a lot of variety and skill in the construction of the nest, selection and arrangement of colorful ornaments. The bowerbird is making something he wants to be beautiful. The ones who are the best at it get to leave progeny. And the smarter you are, the better you are at building a beautiful nest.

I show, using X-rays of museum specimens, that species of bowerbirds that build bowers have relatively larger brains than both related and ecologically similar but unrelated species that do not build bowers. Bower design varies across species from simple cleared courts to ornate, hut-like structures large enough to contain a small child. Furthermore, species building more complex bowers have relatively larger brains, both within each of the two different bower-building clades and across the family as a whole, controlling for phylogeny. Such gross differences in brain size are surprising and may reflect the range of cognitive processes necessary for successful bower building. The relationships are strongest for males, the bower-building sex, although there is a similar trend in females. Because the size and complexity of bower design is targeted by female choice, the observation that relative brain size is related to bower complexity suggests that sexual selection may drive gross brain enlargement.

If the display can be improved through the effort and skill of the displayer, intelligence can help with those efforts. Intelligence will be selected because it makes the displays more attractive.

Human beings sometimes dye their hair, whiten their teeth, or even try to change their skin tone (tanning or lightening) in order to attract mates. If the mating cues are stronger, this sort of "subterfuge" could actually be even more prevalent. The more sentient the species, the more change they can make.

Note that you don't need a high technology: simply realizing that the application of a natural pigment or dye helps attract a mate is sufficient.

Go vote for Tim B II's answer. It's better than this one. I'm simply adding to his body of evidence.

First off, I wonder if you've read the easily-accessed data on this issue.

And a thousand others. People have been trying to answer the very question you're asking for a long time. And there's a lot of debate.

I believe most participants in the argument would agree that there are two components to selecting a mate.

Oversimplifying the issue to so great an extent that angels weep, the problem is this. You have millions of years of evolution backing the emotional attraction of #1. You have only tens of thousands of years of evolution backing the intelligent overrides of #2. Before I go on, this is likely the best direct support for my answer to your question: there simply hasn't been enough time for intelligence to affect sexual attraction from an evolutionary perspective.

It's worth understanding that we humans love to justify things. We discuss sexual attraction in animals and ascribe beliefs to justify a "best mate." A mate that will be a good provider, a good defender, etc. There's an aspect of this that's true, but it's on an entirely sub-intelligence level (it's a challenge to not anthropomorphize animals in the process of explaining them). What evolution has done (if we dare anthropomorphize a process/theory that is, itself, only an explanation for the pinball machine of life) is develop ways of quality advertising that sometimes (but not always) reflect material suitability.

Which is a fancy way of saying the bright spots on the male bird's tail may, or may not, reflect that particular bird's actual usefulness as a mate. Gratefully, life as a bird is somewhat less complicated than life as homo sapiens, so if those bright red spots aren't predictably telling the truth it's not that big of a deal. 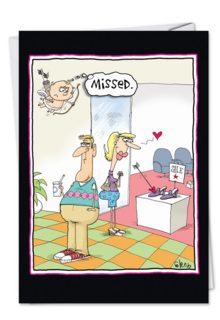 At an animal level (#1, above), the issue is simply attraction in its simplest form. As in "getting someone else's attention." And the addition of intellect is the means of overriding that simple attraction of attention. From my considerably male-oriented but hopefully intelligent perspective, what I look(ed) for in a woman is someone who complements my personality, my skills, who will benefit my career path and whose career I can benefit, whose family is a blessing rather than a curse, does she make me laugh and can I make her laugh? etc. But from the animalistic perspective, what am I looking for?

To specifically answer your question, at the time of early human intelligence, the answer is simply "no." There will have been insufficient time and practice for intelligence to change millions of years of habit.

As time goes on the answer will be "yes." But there must be time. A lot of time. Imposing intellect on sexual attraction is just another form of evolution (evolution was never meant to only reflect animalistic development or passive influences). Eventually it will create new behaviors and habits.

But all you need do is look at the people you know to see that we're not there yet and are unlikely to be for a while.

I think yes. You'd want something that can ensure the life of the offspring so you'd choose "the primes". Then again, some female birds choose mates because they are pretty but those males usually have strong colors thus making them more prone to be spotted by something higher up the food chain. Therefor killed and eaten.

Not the answer you're looking for? Browse other questions tagged reality-check biology evolution sex sapience or ask your own question.

2
How would a world without any mind-altering (via substances) differ as far as humans?
16
How would gender roles be affected by a society where parents could control the sex of their child
4
Could I hope for swarm intelligence to lead to collective consciousness?
9
Evolution bottleneck event leading to color changing humans
12
Can an entire ecosystem be one giant organism with distributed intelligence?
6
Evolution of a sexual dimorphic, pack-hunting ninetails
6
Species with non-sexual dimorphism
2
A Tiktaalik for Placoderms
16
Are plastic plants plausible?
0
Is the evolution of my aliens realistic?