Are there any issues with this FTL drive concept?

I asked a question earlier on here concerning Negative and Heavy Matter - hypothetical types of matter I created to have a working FTL drive. With some extra work, I’ve tweaked the concept and been able to make an FTL drive I feel is pretty self-consistent. I’m asking this because I want to know if it is, or if there are any glaring flaws in its system of operation.

How the engine works

In the centre of the drive is a column of gas. This gas is an element that, when strongly heated, emits radiation that can convert ordinary matter into negative matter. This gas belongs to a class of matter called Heavy Matter, which strongly attracts Negative Matter - when Heavy and Negative Matter meet, they cancel each other out and convert back into normal matter. (I’ve worked all of these processes out on the subatomic level too but none of that is relevant to the workings of the engine.) The gas is heated to the point that it becomes a plasma, meaning a) it emits huge amounts of this radiation b) it can be confined by a magnetic field. Surrounding the confined column of gas is a vacuum - surrounding the vacuum is a much larger cloud of gas; it doesn’t really matter what element this is, let’s say it’s hydrogen for sake of argument.

The radiation hurtles outwards, converting the gas into negative matter. To maintain the vacuum gap between the negative and heavy matter (because otherwise the negative gas would drift inwards and convert back into ordinary matter as it hit the heavy matter in the centre) the whole drive is spun very rapidly, causing the cloud of gas to stick to the interior wall due to centrifrugal force.

Once enough negative matter builds up, spacetime is warped, causing the entire ship to travel faster than the speed of light. The negative matter will be drawn to whichever heavy matter is exerting the most force on it - because very massive heavy matter at long distances exerts more force than fairly light heavy matter at short distances, instead of warping to the centre of the engine, it warps the entire ship over to a large concentration of heavy matter, deliberately placed as a beacon. Large concentrations of heavy matter nullify the effect of the warping, thus causing the ship to drop out of FTL once it reaches this beacon. This allows the ship to travel at superluminal speeds between regularly spaced beacons in the universe.

Once the ship is stopped at the beacon, the plasma is drained, the spinning stopped, and the entire chamber flooded with water. Normal matter reacts with negative matter to form radiation - the result being that the accumulated negative matter is destroyed along with some of the water, readying the ship along with the next jump.

Attached is a cutaway view of this drive.

What do you guys think? Allowing for the mechanisms of Heavy and Negative matter, how feasible is this? Are there any issues or interesting effects I haven’t anticipated? 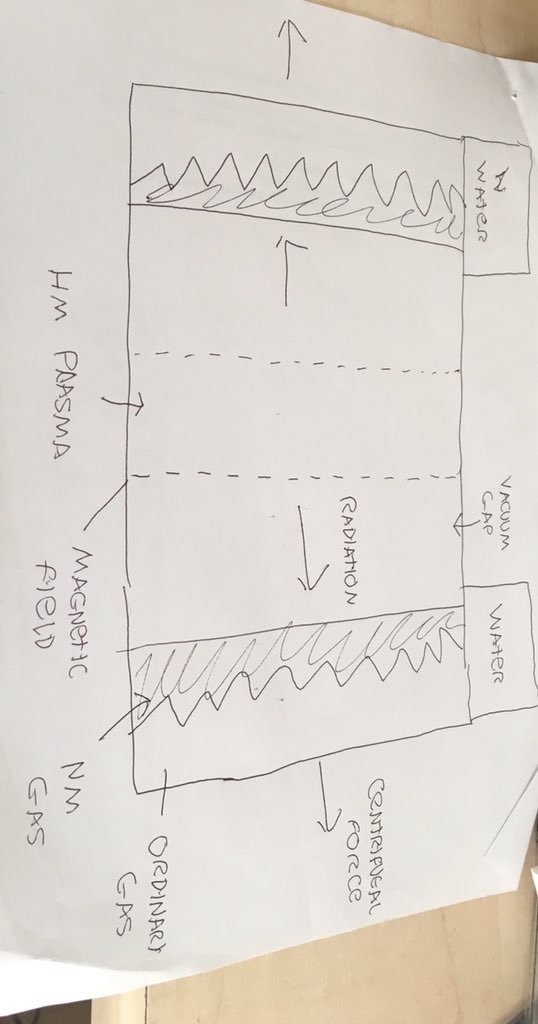 Yeah? I mean: you’ve kinda created some handwavium at the point you say ‘spacetime is warped’ with no further explanation of the physics or mechanism behind it, at which point you may as well simply say ‘Our drive uses negative matter to warp space between it and the nearest heavy matter beacon’, and simply don’t mention the internal workings of the drive (unless it becomes a plot point).

One immediate issue is that your forces are working backwards. Beacons further away exerting more attractive force will lead to ships stranded in interstellar space, unable to move towards any beacon because of the attractive powers of the other beacons. Unless you can add some form of directional selection to your ‘space warping’ you’re basically going to get stuck where you are. If you’re more attracted to close, heavy beacons then you are distant ones then you just end up stuck at whatever beacon you’re at, unable ever again to taste sweet freedom. If you can ‘shield’ your drive from the effects of beacons in any given direction, or if multiple warp vectors start to form and you can choose which to set off along then you can avoid this issue.

If you fix that another issue is all of the stuff between your ship and your target beacon. It’s about to get torn apart by a spontaneously forming corridor of warped space, or possibly hit by the leading edge of a bubble of warped space. Alcubierre based warp metrics don’t take your ship out of normal space: it’s still here, just wrapped in a bubble of immense tidal stresses. A major flaw with the Alcubierre-White warp metric (Alcubierre being the guy who came up with it, White being the guy currently working on it) is that particles (both of interstellar dust and virtual particles from the quantum foam) get stuck on the bubble. Depending on how you run the numbers this either means the inside of the bubble becomes incandescently hot or your destination is about to be bathed in a rather major wave of high energy radiation. Both of these are Bad For All Involved, so you should consider dedicated space lanes with rigorous traffic control procedures.

There are other issues. One is time travel, more specifically the fact that you can’t have special relativity, FTL and causality in the same place because simultaneous events aren’t. You can potentially get around that with a liberal application of general relativity, but then you risk messing with gravity or time (or both) in unexpected ways. Another issue I assumed to be handwaved by your new exotic matter is spontaneously blowing up your ship by annihilating large amounts of matter, as mass is proportional to energy (Thanks, Einstein), and you can’t get around conservation laws, so the first and final steps of your drive function (conversion of regular matter to an exotic state, then annihilation of said matter) result in needing then releasing frankly ludicrous amounts of energy. But hey, it’s a writer’s prerogative to ignore these issues, as long as it makes the story better.

Are there any issues or interesting effects I haven’t anticipated?

The centrifugue must necessarily be located within the ship. And this means that, when the space around the gas distorts, the ship will be distorted as well.

This has the potential to break not only molecular bonds, but also the bonds between subatomic particles as well. Your version of Alcubierre might have just plasma arriving at the destination.

Also notice that it is debatable if even Alcubierre's drive can provide actual FTL travel. See Muuski's comments on the question.

This is really basic question, not highfalutin' like the other questions here, but...

What is the diameter of the tube, and how fast does your tube have to spin, to create a vortex that has a vacuum in the center?

You have the cutoff between "NM gas" and "vacuum gap" be sharp, but I think it would be some kind of gradual fade, though I'm not sure if the density-curve of that fade would be linear.

I do not think, through rotation, that you can accomplish anything even close to a perfect vacuum, particularly given the energies (and hence, gas pressures) involved.

If you've already done the math, great, I won't bother.

If not, we probably need to calculate it, and I'm suspecting that you might need to pass light speed for your centrifuge walls in order to get the vacuum, and you'd end up compressing almost all of the gas down to a liquid.

Not the answer you're looking for? Browse other questions tagged science-based science-fiction physics engineering faster-than-light .

6
Can this version of the Alderson Drive be used to violate causality?
6
What ways are there to keep a steady altitude with large fluctuations regarding load?
3
Alcubierre drives and intrasystem speed limits
2
What would be the positive and negative traits of a total matter to energy conversion drive?
7
Alcubierre warp-lanes, what is the most stable way to create them?
6
How feasible is this gravity-altering exotic matter I’ve conceived? Would it have any unforseen consequences?
16
What plausible reason could I give for my FTL drive only working in space
2
What kind of faster-than-light travel is this and is it at least plausible?
14
Is it possible to make a "safe" electromagnetic "jet engine" using extremely long wavelengths?