Helmet for a humanoid lizard

I am creating a species of humanoid lizard, and want to find a type of helmet that would be feasible within the story.

Info: Tech level is basically hunter gatherer and nomadic, with a small bit of metalwork.

Lizards are approximately 6.5 to 7 feet tall and proportioned similar to a human.

They are a mashup of different types of lizards. Pointy scales like a Sungazer Lizard and some spikes along its spine like an iguana.

Sexual dimorphism: Is such that a male has a skull based on a marine iguana, while a female's head is more akin to a frilled lizard, more V shaped. 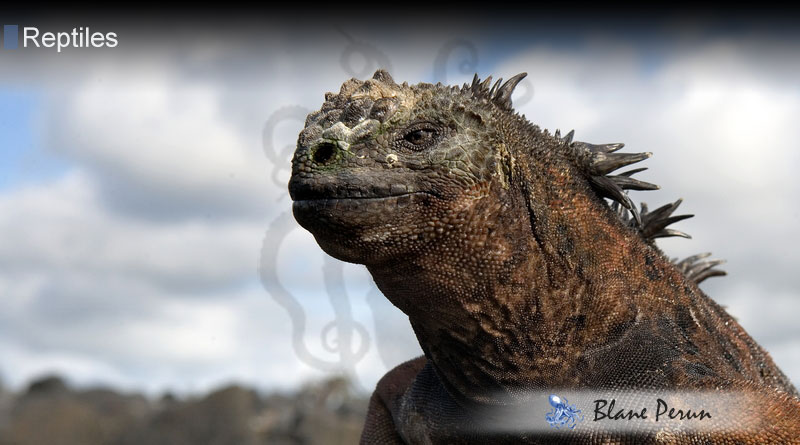 Habitat: They live in a large, marshy wetland, with tribes of between 20-50 members. For food, they consume mostly fish, with some crab and turtle when they can be found. There are almost no large deposits of metal ores, so smelting is relatively non-existent. They can find iron nuggets in the rivers, which they can forge into spearheads and arrowheads, but not enough is available for making metallic armour.

Armour is made from the backplate of large turtle shell (similar to a snapping alligator turtle). Weapons will be mostly fishing spears used for combat.

Basically they use what they can find if it has a purpose.

The Question: What could be a viable material for a helmet for them with the following constraints;

I am currently picturing something like using a crab shell, but I would like a better or different alternative.

Let's see what resources of note that should be available for us to work with:

Now since spears are being used, that means these helmets would have to be resistant to being stabbed. The best materials listed above would be shells and bones. However, most shells are just not in the right shape or size to be viable, and bone degrades too easily.

That leaves us with using Shells, but not shells alone. By making a wicker helmet as the underlayer (like the Hawaiian Mahiole) then adding shells to the frame should result in a sturdy helmet that should not only be relatively cheap, but also effective against stabbing! 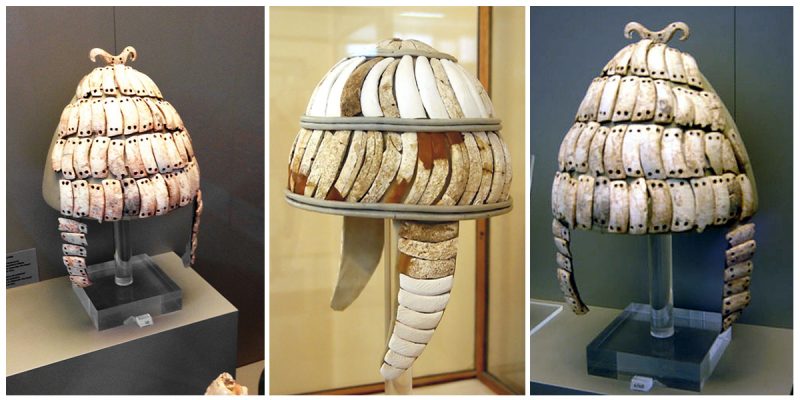 Meriones found a bow and quiver for Ulysses, and on his head he set a leathern helmet that was lined with a strong plaiting of leathern thongs, while on the outside it was thickly studded with boar's teeth, well and skilfully set into it; next the head there was an inner lining of felt.

If you want realism, tusk helmets were real pieces of armor. Odysseus is not tricked out in this helmet for a parade. The tusk is a durable weapon for the pig too, and must be able to take a beating. Other larger tusks could be cut to plate a helmet - ivory is available, durable and workable for a Stone Age culture. Plus field repairs would not be that tough with your pouch of spare tusks and thread.

My original idea was a single hollow tooth from some great beast, hollowed out in the middle and eyeholes cut to form a helmet.

In The Elder Scrolls series of games there is a race that is very much like you describe: Argonians. 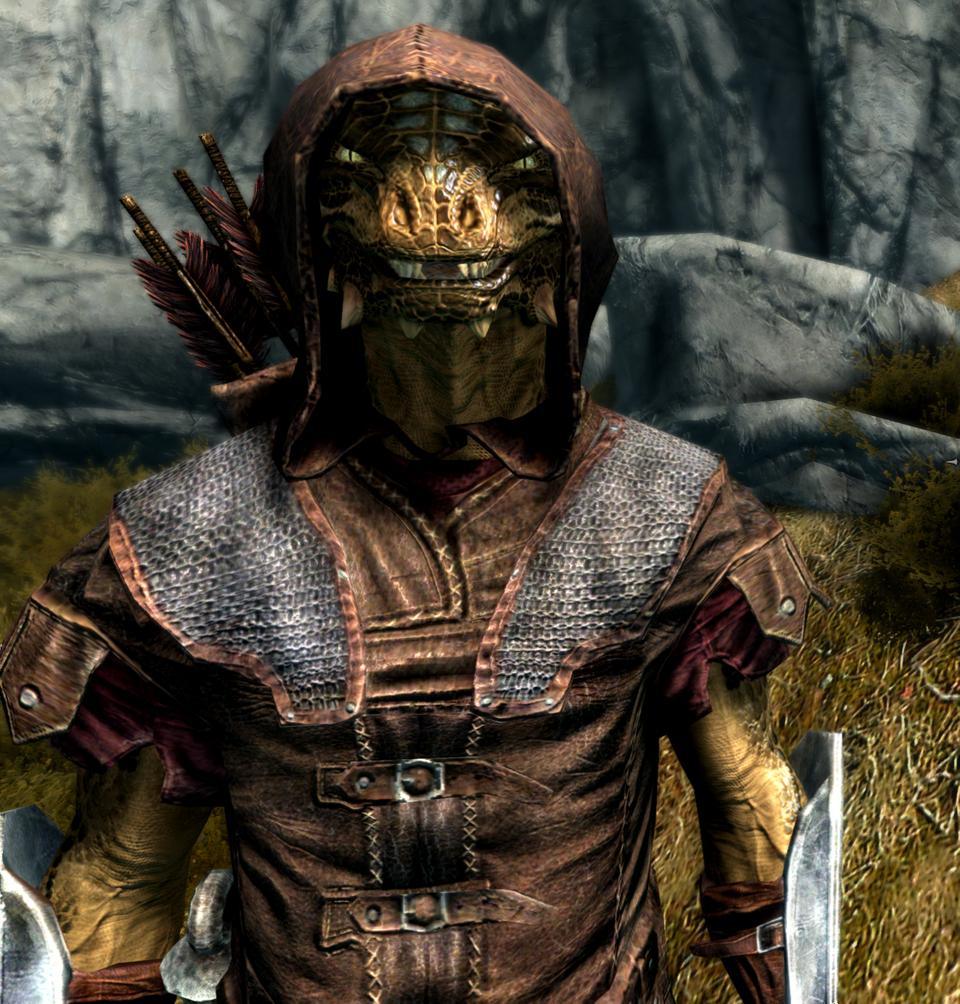 Free leather is not naturally found in any environment. However, if your world has rivers and such, it most probably contains creatures that carry leather on them. You may have to kill them in order to steal their leather, though, as they are very attached to said leather (via the hypodermis).

Do notice that, like any other creature with a muzzle, your saurians require a cut proper to their anatomy in order to use leather helmets. A human leather helmet may not be so useful. 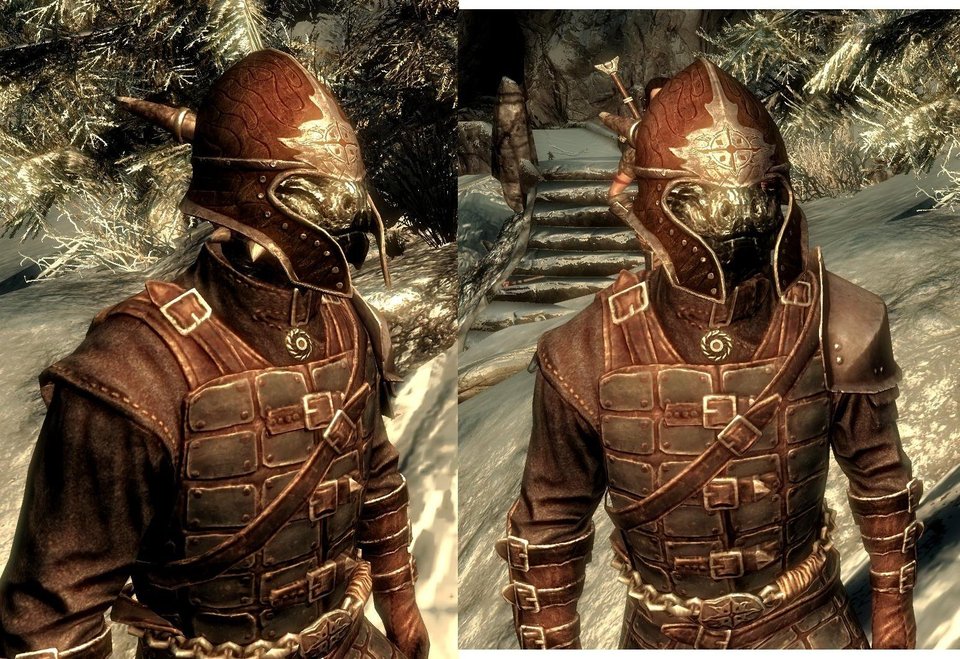 Mine would be hide with bones sewn in it.

you can crack the bones so that they can be smaller and light enough for the head to carry, but thick enough to provide some protection.

small bones can be placed in the hide to form a helmet that would cover the vital parts of the wearer's head.

This helmet wont make the wearer's head invulnerable, but provide some resistance and maybe with luck, deflect the arrows (but that's SOME luck)

Helmets provide little to no protection against the weapons you cited, arrows mostly target the body, because they are bigger targets, and so does spears.

In my opinion, your lizard men should invest more on shields instead of helmets, because they provide more protection and has more uses to them.

First of all, nomadic hunter gatherers generally had no equipment meant for war. There were 2 reasons for it:

1.The population density was very low by necessity (amount of animals was finite) so groups rarely met another group unless both wanted it and while there certainly were raids and clashes, war as such would not happen, as weaker group could simply run away. That is, obviously, if it wasn't obliterated in the first strike, as those groups were small, more like extended family than a tribe. Tribes could gather sometimes for religious ceremonies (fe. once a year). Such a meeting would also be an occasion to intermarry between family groups.

2.They had to carry anything they had on frequent and long journeys so they had very few things - clothing, hunting weapons and very basic tools and camping gear. Dedicated war gear is heavy and so is not something HG group would want to use. One strange dude (or entire family group) could use reinforced leather cap for various reasons as normal head gear, obviously, especially in colder climate.

HGs were also not using metal. Metal working appeared thousands of years after settled farmers became a norm. Discovering metalworking required tools that couldn't really be constantly carried around and a lot of experiments. Possibly it was connected with common use of pottery, and pottery was not used by HG communities as it was too heavy (even though they probably knew how to fire-harden clay).

While group with no farming could be sustained by a very rich fishery areas (like you describe) and become settled in such spot, but as you stated you want them nomadic, the above problems would still apply.

That's why if you want war, then rather than hunter gatherers, your lizards should be early farmers (late neolithic, similar to cultures in New Guinea). Those were already settled (thanks to farming), but hunting was still very important part of their lives. In general, you could simplify it to situation where females are farming while males are hunting and fighting. Just remember in reality it was much more complicated. As they were settled, they were able to start experimenting with metalworking (copper and some basic bronze-like alloys while war (with dedicated war gear) became major part of their lives as they had something to fight over - fields and gathered crops.

What type of armour then? In general, you would have two options - leather or wood. Of those, leather is way easier to use, so would be more common. A leather cap, which can be made in various ways, could then be reinforced in many ways. You can use any hard material - wood, horn, bone, hardened leather, shells, small pieces of metal - pretty much anything that can be sewn into leather cap. Those would be cut into small pieces and attached either by sewing on top of the cap or sewn between two layers of leather. Body armour could be similarly made, as well.

Not the answer you're looking for? Browse other questions tagged fantasy-races armors reptiles .

7
Is this reptilian race realistic?

3
Designing the safest possible, futuristic combat helmet
16
Merging helmet and skin
8
Armor for a humanoid snake
3
Would a monster size aquatic lizard be possible?
33
Antler Helmet: Can it work?
4
Aquatic lizard: Is being warm blooded essential?
10
How to separate male and female members of a "lizard like" species
6
How would a race of horizontal lizard men fight, and how would humans fight them?
12
How would one design a helmet for antlered humanoids?