Would advanced Plantoids be plausible? [closed]

Could it be plausible that if enough time given and favorable conditions are met, the dominant species of an alien planet could be a species of plant and by dominant I mean achieving sentience and technology.

I imagine our brave plant pioneers living on some rocky world where each day they will have to crawl up from mountain valley to reach precious sunlight and to escape animal predators that would chew on them if they stayed at the bottom and at night they would thumble or crawl back down to escape raging winds or blizzards or some sort of danger. They would have to be communal caring for one another and they would have to be predatory in some way to improve their inteligence somehow, maybe sometimes a lone herbivore comes to chew on them and they all gang up on it , kill it and then realize that they can exctract far more valuable nutrients from it than they can from the meagre soil and sunlight they have, still those opportunities would be rare so they would have to still have to struggle with what they can get from the soil and sunlight. Maybe after a while one of them realizes that they can push a rock on some animal to kill it faster and so they discover tools and so on and so forth they keep evolving.

Would or could a scenario like this be possible?

Building things requires cognition and agency, which plants don't have. However fungus does seem to resemble something that really looks like a brain; and has actions that seem to indicate cognition. So on a long timescale it's imaginable that it would create enormous underground brains. Similar to the Starship Trooper brain bug. 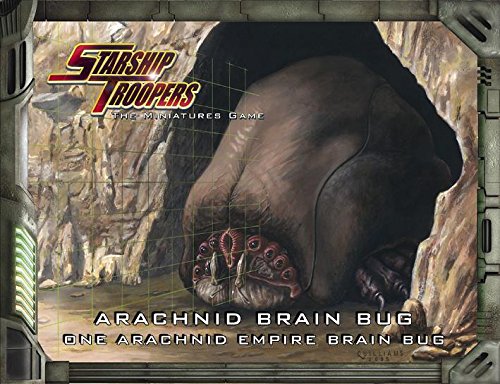 But then there is still question of agency. Currently at large in forests are so called Cordyceps fungi. The fungus infects, for example, a foraging ant through spores that attach and penetrate the exoskeleton and slowly takes over its behavior. As the infection advances, the enthralled ant is compelled to leave its nest for a more humid microclimate that’s favorable to the fungus’s growth. 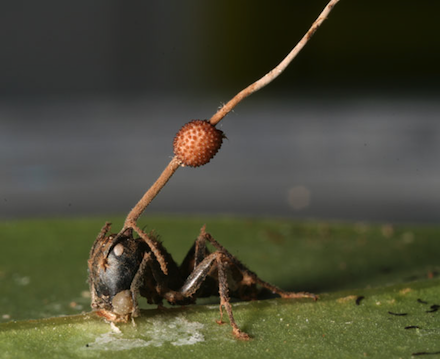 A more advanced Cordycepts fungi could completely take over it's host without killing it, in some sort of symbiosis, giving the fungi agency. There is still the question of how this brain fungus in the ground controls it's workers; because without this relationship it's not really the fungus that's dominant, but rather the animal-fungus hybrid. But several ways of communicating can be imagined. 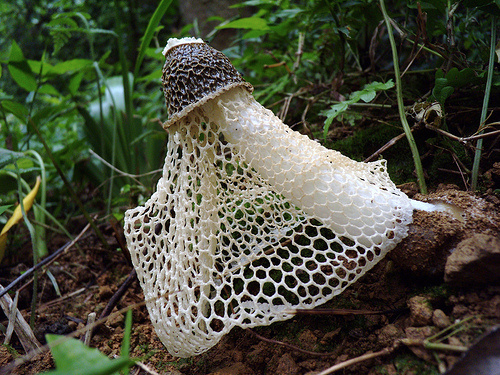 Fungi can be quite beautiful, so I, for one, welcome our spacefaring fungi to visit Earth. 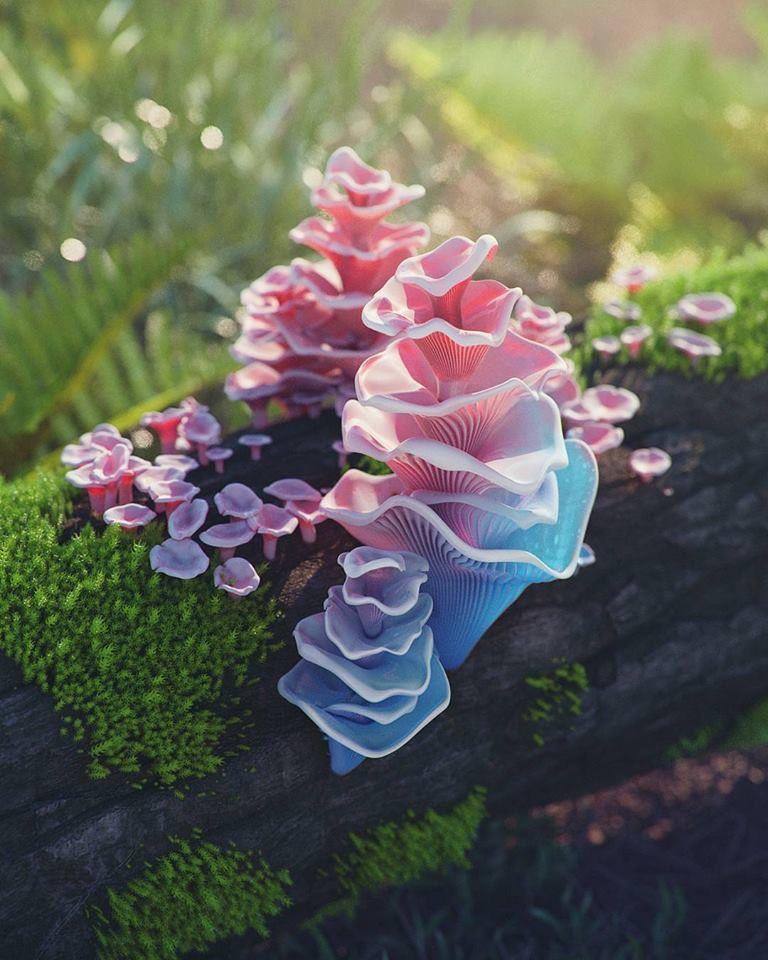 Edit: I did the math and turns out I may've misjudged the sun: it gives more energy than I thought. See edit at bottom.

This has partly been answered here:

Sentient trees. Can they develop technology?

But this question is more of a precursor to that: can such trees ever come about in the first place?

I think this requires a definition of "plant" vs "animal".

Panspermia aside, alien stuff can't be descended from either our plants, or our animals, or any of our other biological kingdoms.

In the question I linked above, it meant "has roots" and "gets all its energy from sunlight, rather than from digesting stuff".

I'm assuming you don't have the constraint that it must have roots, nor even that its nutrients must come from the earth, since the question describes the "plants" moving around.

So that means photosynthesis or something similar.

There are two constraints there: how bright and constant the sun is; and how efficiently the light is converted into usable energy.

Those two multiplied together gives the energy that the plant has to work with. That in turn governs how much physical activity and data processing the plant can perform.

We know that solar energy can power simple computers, and trees, and have energy left over to make tasty fruit, so we can argue it could power a simple nervous system, albeit slow-moving.

So it's feasible that they could form, if there were no faster-moving predators: if they weren't at the bottom of a food chain.

So the main question we need to ask is... why don't faster-moving, shorter-generation critters form and become technological first?

And I think the answer there could be that the light is near-constant (binary star? Big reflective moons? something).

So there's no point storing energy as sugars and valuable resources. You get some energy, you convert it into value as soon as possible. Parasites evolve for those that do store it, but they'd be small and few as most avoid the problem of parasites by just using their resources.

At that point, the only parasites would be parasites of nutrients, not of energy. So plants would prey on each other for nutrients, but at a solar-energy-driven pace.

Some parasites might tap into the energy flow between "leaves" (whatever solar energy collecting part of a plant) and wherever the energy gets used, but to gain any advantage, these would have to be parasites (harvesting long-term from a living creature), rather than predators (harvesting and digesting). So you might end up with cases of symbiotic parasitism, and cases of escalating arms races against the parasites.

TL;DR: If energy is not stored in these alien plants, but rapidly converted from source to use, and the sun is bright and conversion is efficient, then preying on vegetation is not worth the cost, so animals might not form. In such a case, plants might have time to develop a slower-moving technological society without getting beaten to it by faster-moving animals.

Edit: I am unhappy with my own answer. It's too vague.

Let's get to HARD NUMBERS!

Let's make the assumption that you can't make the sun much hotter or the planet will fall out of the "goldilocks" zone, there'll be no liquid water, and so on. That means it's all down to efficiency of energy conversion.

A human uses about a megajoule per day. One watt is one joule per second. There are 86400 seconds in a day. Humans, depending on age, gender and activity, use from 6.5MJ (sedentary 50 yearold female) to 13MJ (active 17 yearold male) per day. A joule is a watt per second, so we can divide those by the number of seconds in a day (86,400) to get the average power usage of a human: 75-150W. About one lightbulb.

This is in theory the energy AFTER our gross inefficiencies have been factored out, though: that's metabolizable energy, per the Atwater System. Of the metabolized efficiency, however, we still have inefficiencies: about 25% according to https://openoregon.pressbooks.pub/bodyphysics/chapter/human-metabolism/.

From https://en.wikipedia.org/wiki/Sunlight, the sun delivers 1367 Watts per square metre to the planet, of which 1050 reaches the ground for the part of the earth directly facing the sun. It also cites the "Average over the entire earth" of "164 Watts per square meter over a 24 hour day".

To doublecheck that number, https://en.wikipedia.org/wiki/Solar_cell_efficiency cites as a low bound "Michigan, which receives only 3.8 kWh/m2/day" - this works out to 158 Watts.

So it seems on its face as if it's possible, if solar can be converted with as high efficiency as the human body's 25%.

For actual sunlight, where only 45% of the light is in the photosynthetically active wavelength range, the theoretical maximum efficiency of solar energy conversion is approximately 11%. In actuality, however, plants do not absorb all incoming sunlight (due to reflection, respiration requirements of photosynthesis and the need for optimal solar radiation levels) and do not convert all harvested energy into biomass, which results in a maximum overall photosynthetic efficiency of 3 to 6% of total solar radiation.

Elsewhere it cites lower percentages, as low as 0.1%, or one one-thousandth of incident light. That's not good!

As of December 2014, the world record for solar cell efficiency at 46.0% was [...] above the standard rating of 37.0% [...] The maximum theoretical efficiency calculated is 86.8% for a stack of an infinite number of cells, using the incoming concentrated sunlight radiation. When the incoming radiation comes only from an area of the sky the size of the sun, the efficiency limit drops to 68.7%.

So, using more efficient systems than Earthly photosynthesis, we can get some OK efficiency. A humanlike 25% is achievable, and perhaps 30-40% is reasonable.

Let's assume they can shut down completely for the night, or they're in the L1 spot between two suns so get constant light or something. Skipping night, that doubles the average power of their waking hours immediately, to ~316W. We need to be able to use 75W after efficiency losses for little-old-lady levels of energy use, so we'd just scrape in at 25% efficiency.

If you double the surface area, giving 2 square metres, then again you'd double the gained energy. 2 square metres isn't that much: a radius of just 80cm or 32 inches: equivalent to a human wearing a golfing umbrella (or ballgown, depends on the shape of your beings) the size of their outstretched arms.

Combine both a sedentary nighttime phase, and a 2-square-metre area, and you only need 12% efficiency to have human levels of activity.

If you quarter their metabolism compared to ours, then you get 3% efficiency: that's within reach of even Earth's photosynthesis.

An full-grown oak tree has 40ft diameter, giving well over 100 square metres. Requiring just 0.06% efficiency (well, a little more, because they have bigger bodies), Tolkien's slow-moving ents seem like they might be feasible!

So, TL;DR: I was wrong, it's certainly within the bounds of physics and math for a luxophagic plant to exist with humanlike levels of metabolism. And if, as in the OP, they couple it with eating other plants for their energy, there's absolutely no problem even with dancing and running trees... but then at that point I'm not sure what the definition of a "plant" is.

Not the answer you're looking for? Browse other questions tagged reality-check planets creature-design xenobiology flora or ask your own question.

4
Sentient trees. Can they develop technology?

14
What kind of reaction time could a mobile plant have?
4
In a nanotech future, how do you preserve the plants?
6
Personal Plant Survival
6
Is my “flying fish” world plausible?
8
A more alien world: Flora
25
Reality Check: Are these Honey Mouths and Thorn Shredders realistic?
7
How could this flora/fauna symbiosis work?
6
Is this a viable/realistic imaginary species?
2
Making a world as Agriculturally productive as possible