Would a "ring language" be possible?

A ring species is a species, in which a population migrates in two directions and the population remains continuous as it migrates so that each sub-population can breed with its neighbors, however when the two ends of the population meet they are different enough that they cannot interbreed.

Would such a scenario be possible?

It’s not only possible, it exists as you describe. Italian, French (Provençal, really), Catalan, Spanish and Portuguese (and many local dialects thereof) merge continuously into each other, and everyone can understand their near neighbours in both directions, even across international borders where the language nominally changes, but Sicilians and Portuguese can’t understand each other. National broadcast media are reducing this by standardising language within each country, so your world should have a lower technology level.

It's basically how languages spread in pre-modern times. Have you seen "Vikings"? There is a scene in the first season when Ragnar lands in England and meets a local landlord and his soldiers on the beach. They're not able to communicate immediately. The vikings speak Old Norse, the English - well, Old English. It's exactly the situation you described: these are both languages coming form the common proto-Germanic roots, but they are separated by hundreds or maybe a thousand years of development. The only difference from what you wrote is that no language stays the same - the "original" language of people who were left behind in Scandinavia also evolved in time.

I wrote an article about it for a Polish linguistic website woofla.pl, but it's in Polish. All I have in English is an animation showing the development of Germanic languages: https://www.youtube.com/watch?v=UzYjsuvHx4c

In short, Germanic people settled in about 2000-1500BCE in the area of the modern Denmark and southern Sweden, and lived there in relative isolation until around 500-200BCE. The isolation contributed to the differences between Germanic and all other Indo-European families of languages. At the end of that period a dialectal continuum emerged with people who dwelt in southern and western parts on one end of the spectrum, and population in the Scandinavia on the other. From the first group, Western Germanic languages emerged, from the second, Old Norse.

Western Germanic languages were also a continuum for a long time (even until the modern times to be precise - even in the 18th century the border between Dutch and Low German was kinda fuzzy). In the south, close to the Alps, Old High German started to develop. In the north, Low German dialects. One of them was Saxon which was probably close or the same as the languages of Angles, and together these two peoples invaded Britain in the 5th-6th century CE. Old English developed as a merger of Old Saxon, Old Frisian, and some other, smaller dialects of people who joined the invaders. Some of them might have even spoken the northern dialects.

In the same time Old Norse was developing as well, but in a more conservative fashion. In the times of Ragnar, late 8th and early 9th century, it was still one language with just some differences between east and west Scandinavia. Even now Danish, Swedish and Norwegian (which has its own interesting story and is divided into two main "versions", Bokmal and Nynorsk) are quite intelligible.

Anyway, when the vikings invaded England it was as if the linguistic history made a full circle. And now both peoples needed translators. But not for long: the languages were still similar enough that probably after a few years of learning a Dane was able to speak Old English quite well, and vice versa. Only the later Norman invasion introduced a lot of (Norman) French vocabulary and put English on a very different track.

It's almost like Slavic languages, though the reason has more to do with history of literacy, political changes and assimilation.

Apart from the broken link between Belarussian and Polish (which in an alternative history of surviving Polish-Lithuanian Commonwealth could exist), there is almost a complete ring.

Going the southern route, central Slovak has some tenuous connection with Croatian (though mutual intelligibility has been already lost to history); Croatian blends into other (neo-štokavian) Balkan languages, transitions into Macedonian, which is mutually intelligible with Bulgarian, which is surprisingly close in lexica to Russian, because of the heavy influence of Old Church Slavonic on Russian. From Russian, the usual route via Surzhik->Ukrainian->Transcarpathian Russyn->Slovak Russyn->Slovak closes the ring.

There is the missing step from Croatian to Slovak, and the connection between Bulgarian and Russian is rather weak. But still.

I think that what you are asking is more or less what happened with Latin and neo-Latin languages.

Take Romanian, French and Italian. They are all from Latin origin: an Italian can understand some French and some Romanian (actually Romanian sounds really similar to some South Italian dialects, while some Northern Italy dialects sound really close to French), but I doubt a Romanian and a French would had the same level of partial understanding. 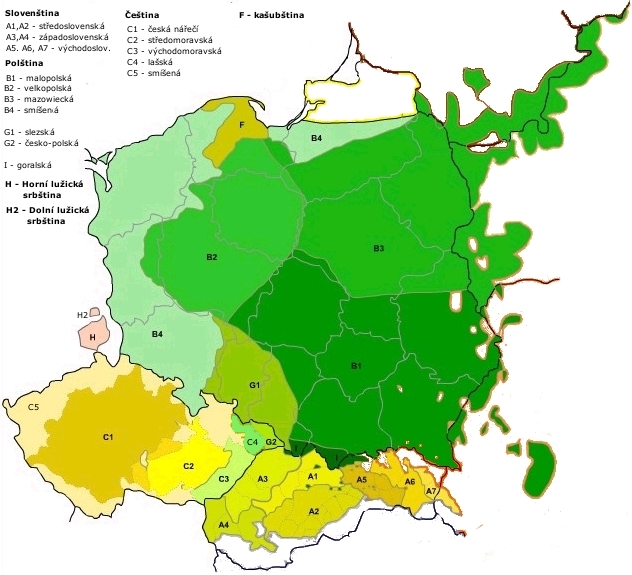 Czech and Polish are, for most native speakers of both languages, not mutually intelligible. However, in the easternmost corner of the Czech Republic, there is a transitional Cieszyn Silesian dialect (G2 in the map above). It is mutually intelligible with the Silesian dialect spoken on the Polish side of the border (G1) and, to a lesser extent, also with the Lachian dialects (C4) on the Czech side. So, there seems to be a well established dialect continuum in this region.

However, this continuum does not exist all along the Czech-Polish border. In fact, there are basically no transitional dialects outside the Cieszyn region.

The thing is, most of what is now the Czech-Polish border region used to be a predominantly German speaking area. After the expulsion of Germans from Czechoslovakia, new settlers from all over the country arrived to the region, bringing their own dialects, which eventually merged into what is now described as the mixed dialects (C5). A similar process took place on the Polish side where the so called Recovered Territories were settled from central and eastern Poland, again creating mixed dialects (B4). These new dialects of Czech and Polish are about as far apart as the respective standard languages are. So, no cross-border mutual intelligibility. Not without a significant exposure to the other language, anyway.

This situation exists in Japan. While the dialect of Tokyo has become the standard language via radio and television, each region also has local dialects. As described, occupants of neighboring regions can understand one another, but travel any significant distance, and the local dialects become mutually incomprehensible. I recall a conversation with a man who was about 7 years old when evacuee children from Tokyo arrived and lived in local temples. He said they could not understand one another at all. He also said that he preferred to speak the local dialect; that he felt more himself while doing so.

I would like to add another comparison in a lateral direction - time. This is exactly how language development over time works. Grandparents and their grandchildren can communicate, but if you were to move through a few generations, you wouldn't be able to understand your ancestors anymore and vice versa, even though every 'temporal subset' was able to understand each other.

Definitely possible, although I don't know real examples from our world.

The Slavonic languages on the Balkans form a somewhat broken ring, almost encircling the Hungarian and Romanian language area: Going counterclockwise from Ukrainian via Ruthenian and Slovak to (first gap in the ring) Slovene, Croatian, Serbian, Macedonian and Bulgarian there is a dialect continuum. Between Bulgarian and Ukrainian is the second gap in the ring, when it were closed along the Black sea coast, Bulgarian and Ukrainian would exhibit a hard language boundary.

Yet another real world example: Arabic is widely spoken, but Moroccans and Iraqis cannot understand each other's (spoken) dialects.

The film industry in Egypt thrives in part because all native speakers of Arabic can understand the Egyptian dialect.

However, if migration patterns around, say, a large ocean caused speakers of incompatible languages or dialects with a common root to live next to each other, there would likely be Creolization within a generation unless there were significant cultural barriers.

More examples for you to use for research, since everyone has answered this well: Quebec French, Creole French, and French are all completely distinct.

In China, there are over 104 (?) dialects. They are distinct enough that not even neighbors can understand each other, so they communicate in English instead.

In Japan, the main island has it's form of Japanese, with a dialect in the Osaka prefecture being like American Southern English, as well as the Ryukyuan Islands having distinct languages that are Japonic, however are also unintelligible to Japanese-speakers.

This sort of dialectal ring continuum might happen naturally for a population with homogeneous language origins living on a contiguously traversable, toroidal world with very limited travel distances. Essentially, a people speaking one language landed as one group on a donut without any great oceans separating its land masses. You might also be able to pull this off on a world which can only be traversed or inhabited along its equatorial zone, so long as it remains reasonably contiguous.

Speakers of neighboring dialects will tend to retain mutually intelligibility and, since no one lives in a vacuum, there will be some "cross-pollination" of dialects across the spectrum. As these people spread across the face of this world, the dialects will diverge.

Eventually, the population will expand until one extreme meets the other. The first encounter would likely be between mutually unintelligible dialects. Whether they initially meet with war or trade, those two groups will gradually reach a point of relative stasis and a pidgin will emerge. This will develop into its own dialect and start propagating along the continuum. Of course, so long as the average person doesn't travel very far, these propagations will rapidly diminish with distance.

11
How can isolated matrilineal societies avoid loss of genetic variation?

13
How long can language drift before it becomes indecipherable, and how to minimize drift?
8
How to speak with someone whose language drifted from your own
11
What would be the best way for a language to spread?
9
How long does it take before dialects branching from a single language become new languages themselves?
2
Language shift over a long period of independent development
5
Mixed language or creole?
14
Could two populations maintain a common language over hundreds of years following sudden isolation?
44
How to avoid the language barrier when there is no time to learn the other language?