Why would a bird have split wings?

On my world there is a creature that has a 'split' in the plumage of its wings and tail.

Instead of having a singular D-shaped surface (when viewed from above, the bird facing to the left), it is more of a B-shape.

Why might a bird evolve to have this trait?

(I know evolution is random, but what benefit might the species gain from it.)

Coevolution. There was this little inedible snake (let's say a sidewinder, because those are heat seeking species) that snuck up on and entangled birds' wings in the night to exhaust them and finally eat them. The B-Bird was too big for this tactic, so it took the snakes aloft, loosing them after a struggle. This was actually a bonus for the snakes as they thus gained easy access to treetops where a good harvest of nestlings awaited. So the snakes adapted to not obstruct B-bird overly much. B-bird meanwhile benefited because the ruckus caused by the sidewinders dropping into treetops gave them opportunity to ambush some critters that normally kept a low profile. So B-bird adapted by developing the B-plumage, with no hard-to-cling-to plumage in the middle, just bone, skin and sinew, a hard point, if you will.

The docile sidewinder on the hard point still had the innate reflex of orienting towards prospective heat sources, which gave another benefit to the night hunting B-bird.

For reasons of balance, the B-bird often waits for one sidewinder to attach to each wing before taking off. It then homes in on promising targets detected by the snakes, and shrugs them off, diving into the ensuing explosion of activity to find prey.

It's a sexual selection character, more or less like a male peacock tail, which from a strictly practical point of view is a pain in the back for a bird who has to move in a dense forest environment.

If the male can manage to survive with clipped wings and tail, it means he is really fit and thus a good mate.

If he doesn't manage to survive, well.. corpses do not mate. His genes won't be carried on to the following generations.

Your birds have a double wing, based on expansion of the alula. 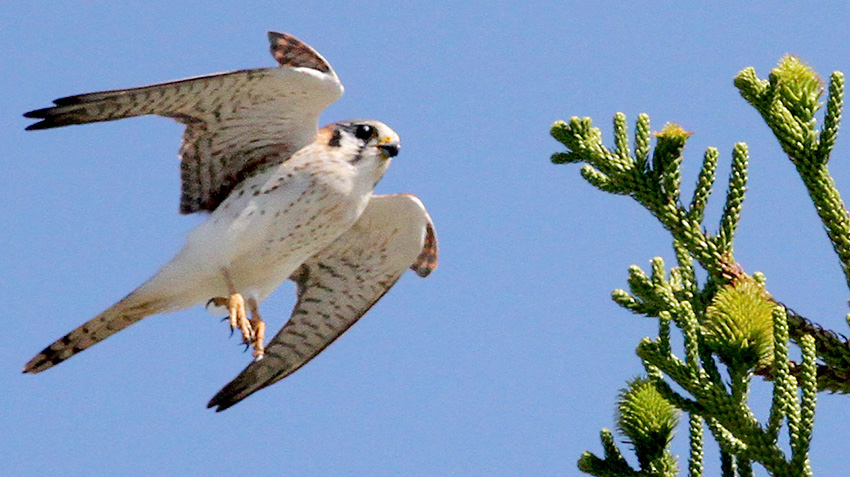 The alula /ˈæljʊlə/, or bastard wing, (plural alulae) is a small projection on the anterior edge of the wing of modern birds and a few non-avian dinosaurs. The word is Latin and means "winglet"; it is the diminutive of ala, meaning "wing". The alula is the freely moving first digit, a bird's "thumb", and typically bears three to five small flight feathers, with the exact number depending on the species. There also are minor covert feathers overlying the flight feathers. Like the larger flight feathers found on the wing's trailing edge, these alula feathers are asymmetrical, with the shaft running closer to anterior edge.

In your bird, the alula has enlarged to a size comparable to the main wing. A digit can definitely support a flight structure, as seen in the wings of the pterosaurs. 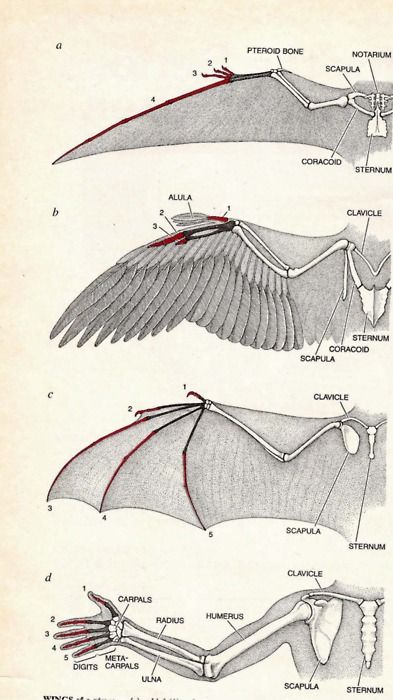 The double "shoulder" (though neither joint is actually a shoulder) forms the B of your birds wings. The double wing aids in maneuverability and steep dives.

There are plenty of birds with split tails, e.g. 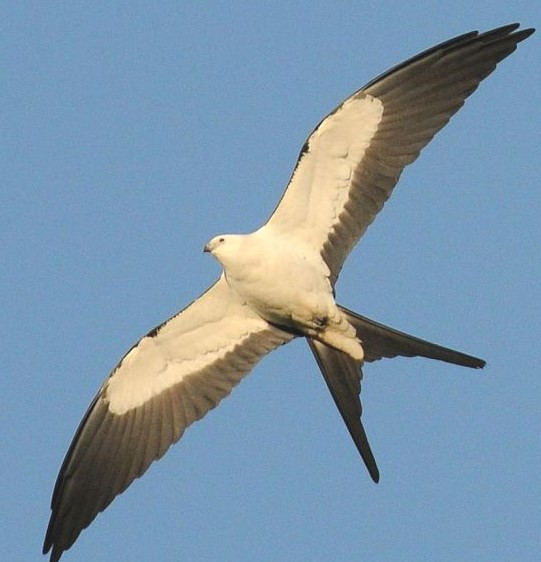 Why? Well one reason is to allow birds to recognise other members of their species.

To confuse its Predators

Assume that your B-Bird is a small bird and prefers to fly at a lower altitude. Now suppose that in the same environment there is a large predator bird that preys on smaller low flying birds.

Your B-Bird can't fight this predator, nor can it outrun its predator, so what it can do to survive, Confuse the predator. This B-shaped wing of this B-Bird is not what a predator will expect for its lunch to look like, so it's really confused.

Along with this your B-Bird also has some colorful patterns on top of its wings that look like a series of giant eyes, that looks threatening enough to the predator that it prefers not to attack your B-Bird.

This trait is really useful and hence a deciding factor to find a mate (both males and females have these patterns).

If the split you mention is deep enough and it has essentially 4 wings which can be moved independently like a dragonfly that would give it abilities like changing direction midair much faster, hovering, flying backwards, etc. This would still give it a B-shaped profile.

Dragonflies evolved 4 wings for this purpose, and they are one of the most efficient hunters since they can anticipate trajectory in real-time and intercept their prey mid-flight (instead of just chasing it like a lion does). This requires fast low latency direction changes and good brain processing. Your bird could have evolved these for the same purpose. And this model works for larger organisms as well and has precedent in the real world: a dragonfly ancestor called Meganeuraas which had 2 feet of wingspan, bigger than many modern birds.

in 2003, the prolific Chinese dinosaur-hunter Xing Xu found an actual four-winged dinosaur. He called it Microraptor gui. Xu saw the outlines of feathers clearly splaying from the creature’s legs as well as its arms. These were clearly traces of long, flat and asymmetric plumes, much like those that keep today’s flying birds aloft. While it lived, Microraptor probably looked like a starling wearing flares. Xu suggested that it may have used its leg wings to help it glide, while others later suggested that it could have flown like a biplane.

For a time, it looked like these feathers disappeared before true birds arrived on the scene, but Xu is now back with 11 new fossils that discount that idea.

Habib thinks that the long asymmetric leg feathers of Microraptor probably did play some role in gliding or flying, but the smaller plumes of other baggy-legged species “might have merely been there because of a developmental quirk”. If some genes are producing large feathers on the front limbs, “it might not take much to tweak a set onto the hind limbs too,” he says.

Not the answer you're looking for? Browse other questions tagged creature-design evolution avian flight or ask your own question.

16
Anatomically Correct Harpy
8
Evolution of a sexual dimorphic, pack-hunting ninetails
8
The Science of the Marsupilami
0
How would a species similar to the Rito from BOTW evolve?
12
How to evolve a reptile into a wyvern, 100 million years in the future?
7
What practical forms can a “branch-tailed” organism have?
6
Air bladders in bat-like skin wings for better lift?
2
Wings going from locomotive purposes in juveniles to sexual purposes in adults, plausible?
18
Would an evolutionary predecessor for winged quadrupeds start with four legs and gain wings? Or start with two legs and wings and gain extra legs?