How to not get blinded by an attack at dawn

I'm imagining a low-tech medieval fantasy world where an attack at dawn such that the defenders are forced to look into the rising sun conveys a huge advantage. The effect on my fantasy humanoids would be many orders of magnitude greater than anything humans experience. The armies are mostly wooden shield and spear equipped levies and normally a shield wall puts attackers at a disadvantage. On open ground at dawn, however, sun-blinded defenders, could have their line broken easily by a charge and face disorganization and defeat by a much smaller force. I'm hoping this will lead to interesting tactical decisions where terrain that defends against an east-to-west attacks becomes invaluable and forces are constantly maneuvering and taking risks to try to get the sun on their side.

My question is this, is there a portable tactic, or inexpensive tool that would allow defenders to avoid being blinded by the rising sun?

You don't need high tech, or even glass, for light-reduction "glasses".

In real life, there are places where bright light is a problem - in snowfields in the north. People find ways to cope. 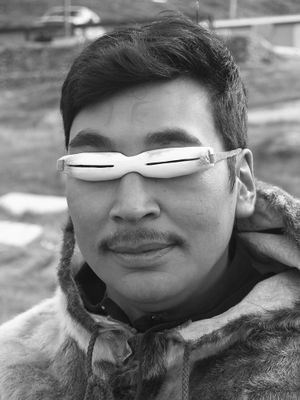 (Picture from a webpage about Inuits)

I imagine that army tactics in this world would evolve such that commanders would not put their troops in that situation in the first place - i.e. if they are expecting an attack in the open field from the direction of the rising sun, they have already made a gross tactical blunder. They would choose their time/place of battle such that this simply isn't an issue (early morning twilight, perhaps, or a civilized post-lunch melee).

Even attacking troops may want to avoid dawn, as any cavalry units or routed ground forces may also end up facing into the sun, running straight into their own comrades.

Give them a taste of their own medicine!

Of course it is not the most proper answer to the OP, but it could be an interesting countermeasure.

Attacked soldiers have a mirror (or a patch of very shiny metal) embedded on their helm, just above the forebrow and/or in their shield. By adequately shaping the mirror, it would reflect the light from the low sun toward the enemies, effectively blinding them.

For a technological solution, a brimmed helmet such as a morion could be tilted to block the sun while still allowing good visibility of your opponents. 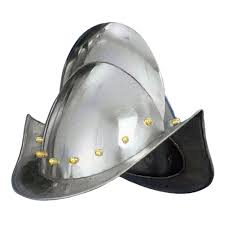 However, if you're caught off guard and forced to come up with a tactical solution to this problem, you could split and roll the line. Let the enemy push through the middle of your formation as you try to hold the flanks. This will put you at a slight disadvantage because it would mean if one side of your army starts to fall, it could not be reinforced from the other side, but it would get the sun out of your eyes eliminating what is probably the greater threat. Plus, if your attacker is in fact is the smaller force, this maneuver could be the precursor to completely surrounding them which would maximize the use of your superior numbers.

Avoid having open, level ground to the east at dawn

As long as the terrain immediately to your east either blocks the light or impedes your enemy, you're fine.

If you're immediately west of something tall and opaque -- woods, a ridge, a town wall -- it will block the sun until it's higher in the sky. (It may or may not also slow down the enemy.) If your enemy is on top of it, you'll be looking up at them and not at the sun, though you may have a related problem an hour later.

If you're immediately west of a valley, you'll be looking down into it, not into the sun. (And your attackers will be slowed by climbing.)

If you're immediately west of impassible terrain -- water, swamp, thick brush -- then your enemy won't attack that way.

Note that sunglass and substitutes do NOT solve the problem. They prevent eye strain, but they block out the light you need to see as well as the sunlight, so they don't help you see your attackers very much.

The vulnerable area is actually quite small, therefore a 6' deep trench would stop any charge from the vulnerable direction.

For the first hour, the sun is pretty close to the horizon, so if you can block the light just a few yards off the ground in front of you, then you'll be in good shape, right? Also, the place where the sunrise is most dangerous is in an open plain, and I assume you don't have enough time to plant a bunch of tall bushes and trees around your defenses. So you'll likely have some advance notice that enemies are coming near, even if it comes by means of scouts that are set off to the side of the approach area so that they don't get blinded.

Block out the Sun with Smoke

Suppose your east-facing defense has a bunch of catapults geared and ready to pummel the ground 10-50 yards in front of your battle line with powder/smoke bombs, creating a dense smokescreen that would both protect you from the light, and also give you the opportunity to quickly rearrange your troops in preparation for the attack.

The downside is that if you do this more than once, the enemy might expect it. In that case, since neither you nor your enemy can really see one another, and neither of you have been thrown into confusion, the worst case scenario is that you're on level footing with your enemy. In any case, it's easy to imagine generating a very large smokescreen with enough materials, and so this gets the sun out of the picture.

Expanding on this idea, you can choose from any number of powders to maximize the effect. You could mix an irritant like cayenne powder with fine flour or cinnamon, which can be caused to explode when enough of it is suspended in the air. You could even follow up with burning wood soaked in onion juice -- it'll produce a lot of smoke, and it would be quite uncomfortable to wade through.

In the worst case scenario, you're downwind of the battlefield. If that happens, or if your enemies are wise to your delicious half-baked smokescreen and try to counter it with water or something, then you can always fall back on regular medieval smoke bombs.

Faulty premise - it gives no advantage

I can only assume the OP has never been awake at dawn. The sunlight is not ever "blinding".

Sunlight as a distraction is useful only in the very small area covered by the sun. Soldiers looking forwards are by definition not looking into the sun, because they're looking towards their opponents and not up into the sky. One possible exception would be if the enemy are landing on a beach, in which case the horizon is lower and glare off the water could be an issue, but otherwise it really doesn't matter.

Of course targeted arrow firing would be affected, since archers do look up. But no army fired arrows at specific targets, unless the targets were very close - they fired en masse, with the target being "put that arrow 200 yards away". Distance mattered, not accuracy, when you're aiming at troops in formation.

When it comes to hand-to-hand fighting, it might be a slight distraction, but barely even that. If you're fighting, you're focused on the opponent. Slight flashes from a rising sun will have no effect. I'm not aware of any historical land battle in which the angle relative to the sun had any effect due to brightness, although of course I'd be happy to be corrected.

Quartz is an extremely abundant material, and some forms of quartz crystals are translucent. Perhaps they could be fashioned into a thin strip and attached a helmet visor, or tied in front of one's eyes with a leather strap. With the strong backlight of the sun, enemies would have quite dark shadows and their fuzzy outlines might be enough to attack or dodge.

One way that might reduce the enemy's advantage somewhat is to attach a horizontal bar or strip in front of the soldier's forehead that can be lined up with the sun by tilting one's head. It might take some skill to use but the soldier would be able to turn their eyes left, right, above or below, and to some degree rotate their head.

(The bar cannot be vertical because its shadow could only cover one eye at a time.)

When it is hard to maintain head tilt, for instance when dodging something or dashing forwards, the soldier could look at the ground or close their eyes. With your eyes closed it is possible (with some skill) to tell when the bar is in the right place and open your eyes again.

It is clearly not a great solution, but I think it would be better than nothing.

Since you have middle-ages technology, your humans likely have cheesecloth or burlap. Simply wrapping this around their eyes in a thin layer would allow them to see, but still block out the sun. Halloween costumes do this when they want to hide the wearer's eyes, with the added effect of acting as light-blockers. Since you don't need that much visibility up-close (it actually becomes a hassle in real fights), this is good for front-lines soldiers, with the added bonus of acting as a sweatband and preventing sweat from stinging their eyes.

Adding on to @Artelius's answer, instead or the normal white crystal quartz, you could use Smoky Quartz to form a kind of sunglasses. These are better for commanders and archers, which depend on fine vision control for their duties, which also supports these positions being rarer.

12
Underwater Sneak Attack
1
How would a medieval army conquer a treetop city?
17
what would allow for the use of cannons but not handheld guns
2
How Large could this Optimized Preindustrial Population Get?
8
How Quickly Can you Get From a Population Of 100 Humans to a Walled City-State?
3
How to attack with War Lice?
15
How big does a world have to be to not have a sunset?
9
How do migratory dragons avoid being blinded by sun?