Can a planet hit by a meteor shatter into two pieces? Alternately, if not a meteor, an advanced interstellar weapon?

First, is it possible for a planet hit be a meteor to shatter into two pieces?. Then, can the two pieces remain in orbit? Especially, can they develop a sort of co-orbit around each other?

I like TimB's answer discussing the Giant Impact Hypothesis. I see that in a comment on his answer, you wrote

Thank you! I actually had this Moon origin theory in mind. But I'm actually wondering about an inhabited planet, in the immediate run. Is there any possibility of survivors, say, after the shattering? For a while, at least? Any idea?

The answer is most certainly no. I'd like to go in-depth as to why that won't be happening. 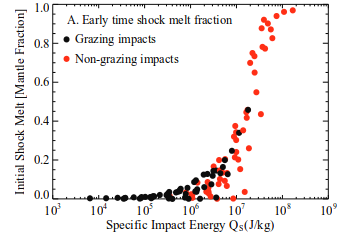 We're all going to die.

Yes, in fact that is one theory of how the Earth and our Moon came into being. A large body hit the earth, ripped off a section of it, the smaller section ended up in orbit around the larger.

Note that gravity of the chunks will always try and pull them back into a spherical shape though, so you will end up with two smaller spherical bodies orbiting each other. You won't end up with "shattered chunks".

Given the amount of energy needed to destroy a planet, even sending another planet on an impact orbit will not do what you want (as a BTW, the impactor that smashed into Earth and created the Moon is estimated to have been the size of Mars).

So a relativistic hyperweapon approaching the Earth at a very high fraction of the speed of light is probably the best way of going about planet "cracking", but you need to calibrate the impact rather carefully. Too "slow" and you get a ball of molten magma that gradually collapses back into a planet sized ball (or maybe a planet and one or two moons). Too "fast" and you end up with a cloud of gravel forming a new asteroid belt around the Sun. Even more energy and the pieces reach Solar escape velocity and exit the Solar System for a lengthy tour of the Galaxy.

An entertaining synopsis can also be found here: https://what-if.xkcd.com/20/

You will see according to his calculations, you need to impact the Earth at 0.9999999*c* to get to the effects that you are looking for, and far beyond any sort of engineering that a Type I civilization would be able to unleash on its unwary interstellar adversaries.

You could not split a planet in the manner you described as several answers here pointed out.

Maybe
However, there is a special case which might result in a split body.

Consider all bodies in the Solar System are split into two groups: 1) the roughly spherical ones and 2) the non-spherical ones.

No, it's not possible. You can have something like Tim B's answer regarding the Theia impact but that is not a case of a planet shattering into two pieces, but rather a grazing impact where the impactor broke up but went into orbit rather than merging with the planet. (Yes, there was substantial mass exchange, but the moon is mostly impactor, the Earth is mostly Earth.)

To actually split a planet is another matter--the basic problem here is that the heat of vaporization of the planet is less than the gravitational binding energy of the planet. A simple application of brute force can't break it without destroying it.

Even if you have some sort of gravity generator to pull it apart without smashing it in the process you'll have the problem that the pulled-apart pieces are massive enough that they're going to turn into spheres. That will be cataclysmic for anyone on them. Not to mention that the atmosphere is more mobile than the rock, it's going to fall off the edge of the world. Everyone suffocates.

An "advanced interstellar weapon" would need to carefully cut the globe in half without heating past the edge, while simultaneously shoring up the exposed inside half so it doesn't pull itself back into a ball.

Digging a trench allmthe way through, in and of itself, is just an engineering problem. Self-reproducing machines could dignand build more with the removed material. One could calculate the energy needed to move a half-mile wide curf out of Earth's gravity.

Sealing the cut end, and building a wall to hold the air, probably involves materials stronger than what is physically possible. However, it does not have to be a ultra-thin covering. The half of the world does the job now, passively. Make an extended slab that is dome shaped but much smaller than the original half it's replacing, so it has bulk (hundreds of miles) especially towards the center. It allows for active cooling too, so it doesn't need to withstand the temperature like a passive material.

That would cause the half-world to cool much more rapidly, and the gravity woukd be all messed up so even with the cap (with a lip) the oceans and air would fall towards the middle of the hemisphere, as the thin lens edges don't have enough attraction. The rocks would do likewise: even with a strong cap over the cut, it would collapse in the other direction. The cap needa to be made with ultradense material to provide gravity, matching the original missing half. It would be less massive than the original because it is smaller, so not 4000 miles away in places.

I think you should try it with an airless world first. If you slice the moon, you could get away with hollowing it out too.

7
Could Pluto/Charon support an atmosphere between them?
13
Is it possible for one star to orbit another?
1
How to naturally maintain a Earth-sized Planetary Ring System and the possible periodic bombardment that can ensue?
1
Can you destroy a planet by poking a hole in it?
1
Is there any way to tidally lock Earth to the Sun in its current state?
45
Can two adjacent, life-sustaining planets orbit a star such that they are rarely near each other?
17
Can a habitable planet have two separate crusts, both of which can sustain life?
8
Possibility of using large asteroid as planetary attack weapon
7
How far should second star be in my binary system?