This question has its origins in the word "dendraphile" used in a YouTube comment. It was used in an insult used by dwarves towards elves. My chain of thought then was that the dwarves would use plainer language like "tree hugger" and after drinking enough beer the "hugger" would be replaced by cruder word implying sexual intercourse. At that point my inner dwarf was like: "It would be just like Elves! Humpf!"

But the thing is having sex with trees really would fit Elves. They totally would do it if it was practical as part of some weird ritual about being more in sync with the nature. And with magic very little is impractical. Especially for a race that typically uses millennia on some pretty pointless projects because they have some serious personality issues.

Then I got to thinking about the specifics. Sex is basically exchange of DNA. It can happen between species and in some cases even between very different species. Bacteria like to exchange DNA with anything and viruses can ferry DNA between cells.

But all examples I know are fairly random and irregular. Despite this starting from and being based on fantasy I'd like a science based explanation of how regular and predictable genetic exchange would work. Specifically the consequences. We can leave the mechanics of how it happens to "Elves are weird and have magic". I am just interested on how the plant material would fit into the animal cells and what consequences it might have. And same the other way around. What could the plants give animals and what could animals give plants.

Note that despite the fantasy elements the actual question is about the science based part. I'd prefer hard science but honestly the background probably takes this too far outside of what might have been studied so requiring citations might be too much. Still it is the hard science part of plant and animal genetics I am interested in. Speculation I can do myself.

science-based biology genetics
Share
Improve this question
asked May 10, 2019 at 14:06

Our bodies are 1-3% bacteria by weight.

Bacteria is vital for our functioning; killing it off has consequences. All cultures (except our very modern one) have special foods and activities that support our healthy microbiome.

The very first time we are colonized with bacteria is during birth. Breastfeeding is also an early source of healthy bacteria.

Many bacterial sources for the infant derive from the maternal microbiota. Therefore, beneficial infant colonization is dependent upon maternal genetics, environmental exposures and diet before and during pregnancy as well as during breast feeding. For example, prenatal maternal exposure to farm animals and consumption of raw milk is associated with decreased atopic disease.

Perhaps there is something about trees...

The soil around trees is filled with amazing colonies of bacteria and other micro-organisms. Bark too. Leaves. Everything.

Imagine a particular species (and/or location) of tree whose microbiome is synergistically connected with that of elves. This may not be a genetic exchange in the same sense we mean that two elves (or two trees) exchange genetic material with each other, but it's still a genetic exchange. Bacteria is vital for humans; you could make these bacteria even more vital for elves.

Treef---- ... umm "tree whoopee" could be part of their fertility rites. Imagine rituals at puberty, before marriage/partnering, and during pregnancy. As well as couples hoping to conceive rolling around in the dirt and fallen leaves under the trees.

While all my examples are for female elves and genderless trees, we can imagine that male elves would also get in on the action. In part to boost their own microbiome (after all, we humans have to replenish our bacterial stock regularly, with our food) and in solidarity with the women. This would be best done orally. But for pubescent boys and men too who feel a particular action is required, I'm sure you can easily come up with cultural reasons for it.

Remember too the origins of the word "culture." While it comes from cultivation of the soil (a task that involves microbiomes of many kinds), it also has a relationship to food cultures. Cultured foods are those that are fermented, i.e., inoculated with bacteria which is encouraged to grow.

Elves and trees, well, it's a special relationship. One necessary for their health and wellbeing. Good for the trees too, as they're protected and cared for and can reproduce with ease, with the help of the elves.

A single genome is capable of producing a wide range of different phenotypes. As an example, every cell in the human body has basically the same DNA, but depending on what genes are activated you get completely different muscle cells, neurons, white blood cells and many more. This same sort of variation occurs at the organismal level as well. Compare the various castes in ants or termites or the myriad of different forms of some aphids that depend on environment or the extreme divergence between males and females of many species. Most plants also produce radically different phenotypes. Plants often have multigenerational life cycles which alternate between haploid and diploid and which can have radically different phenotypes. You would never guess that a fern’s haploid gametophyte and its diploid sporophyte were the same organism based on their appearance.

The point of all of this is that there’s really no reason why a single genome couldn’t encode both a plant and an animal at different stages in its lifecycle. When it wants to make an animal it turns on the animal genes, and to make a plant it turns on the plant genes. Of course, how such an organism would have evolved is difficult to imagine, but if you are willing to explain their origins as magical there is no reason why elves and trees can’t quite literally be the same organism.

The specifics of how this would work are up to you. One simple setup would be that when two animal elves mated some of the progeny would be a tree elf and when two trees elves mated sometimes the result would be an animal elf. If you want animal elves mating with tree elves another setup could be that the trees represent male elves and animals represent female elves. So the animals mate with trees and give rise to more trees and more animals. It could be much more complex than this if you’d like, real life cycles are often more complex than just a single circular cycle. Go wild.

As a parting note, the Pequeninos of Orson Scott Card’s Speaker for the Dead is an example of a similar animal-plant pairing in fiction that you may find interesting. (It's a good book too.)

I like to answer this kind of question by pointing to examples from Earth which can be used as a springboard for imagination.

The first and most obvious are the kleptoplasts such as E. Clorotica which take in chloroplasts from their food and use them for photosynthesis. Some take in whole plant microorganisms and use them as batteries, The Matrix-style. However, some, such as M Chamaeleon, have an endosymbiotic relationship with red and green algae, and can continue to photosynthesize despite having broken down the algal cells.

Then there's horizontal gene transfer, which has been found to have happened between kingdoms, such as between arthropods and trees.

The horizontal gene transfer page has more examples, but no really good ones between plant and animal. And that, so far as I can tell, is where it ends... for nature.

But what of science?

Using somatic fusion, you can join together the cells of two different organisms, such as tobacco and humans! I put an exclamation mark because humans!, but really, it's way less exciting than it sounds as a headline. More interesting, I'd argue: but less exciting. In fact, while it's an interesting challenge to be able to write a paper on, I don't think anyone's found anything useful to do with these yet.

There's also genetic manipulation, of course, where genes from plants could be included in an animal, or vice versa. This is done, combining spinach and pigs! But again, more interesting and less exciting than the mind's eye might expect. No pigs with floppy leaf-ears or anything. Just a higher proportion of certain fatty acids in their tissues.

And what of fiction?

There are not very may plant-animal hybrids of antiquity, and in general, they were an attempt to explain the origins of the animals, rather than just makey-uppy monsters like chimeras and such: 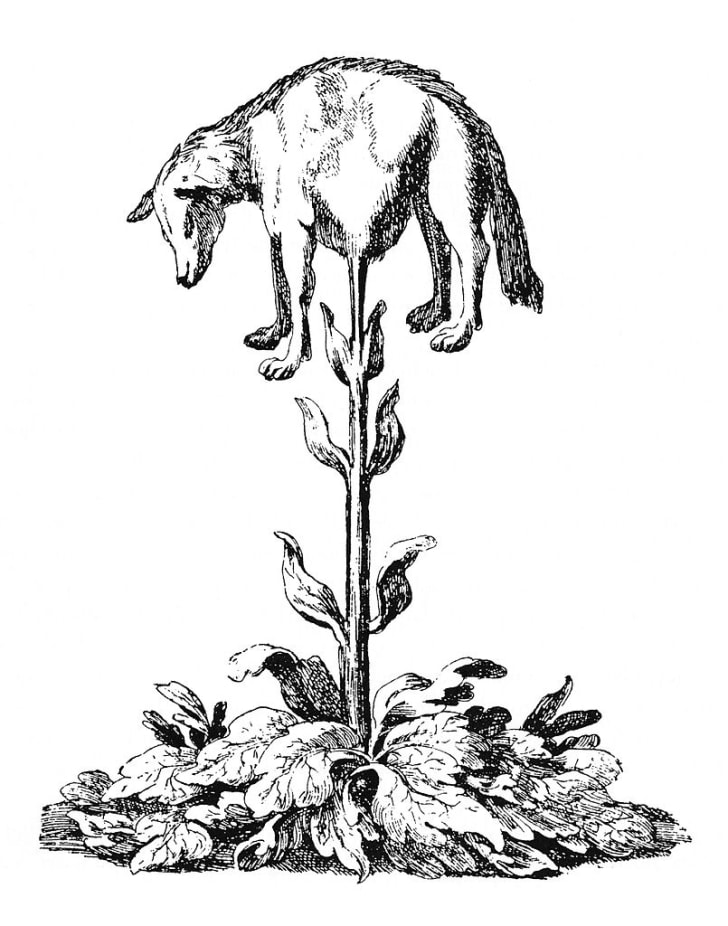 Then there are many stories of seeds sprouting within humans, which has actually happened, not just once but multiple times, though not to the point of growing out of someone:

So what of elves?

There are a few ways that elves could do this. They could photosynthesize, but for an animal the size of an elf, it'd grant essentially no useful energy. Chloroplasts might, however, provide good camouflage, so might well not be worthless.

They might deliberately, as a form of scarification, implant seedlings in their skin, or thread them through body piercings, or insert their roots in body orifices - who knows, they're elves, they're weird.

I've heard one apocryphal tale of a gentleman who used seeds to increase certain sensations, only to have them sprout, but cannot find any reliable reference for this.

IF you wear clothing filled with loam, and walk around with saplings planted in them, eventually, over the decades, you will become encased in trees. Eventually the constriction might kill you, and you will not wake up one morning. Or after sitting and meditating stationary for enough days, you might find that you can no longer lift them up, as your muscles wasted, they grew heavier, and reached little roots into the surrounding ground. A tree lover might not see this as a bad way to go.

Not the answer you're looking for? Browse other questions tagged science-based biology genetics .

13
What is the technical feasibility of DNA-altering drinks in a fictional bar?
4
Elven life cycle and population
32
How to evolve/justify pescatarian elves?
11
Transmissible diseases in a multi-species society
7
Genetic Compatibility Amongst Differing "Fantasy" Races
6
Which cells to pick to get a pure sample of DNA without precise equipment?
3
What would be the strengths and weaknesses of a hybrid made with human and lizard DNA?
2
What exactly are the requirements for the formation of a rainforest?