Can liquid water exist on the moons of this gas giant? 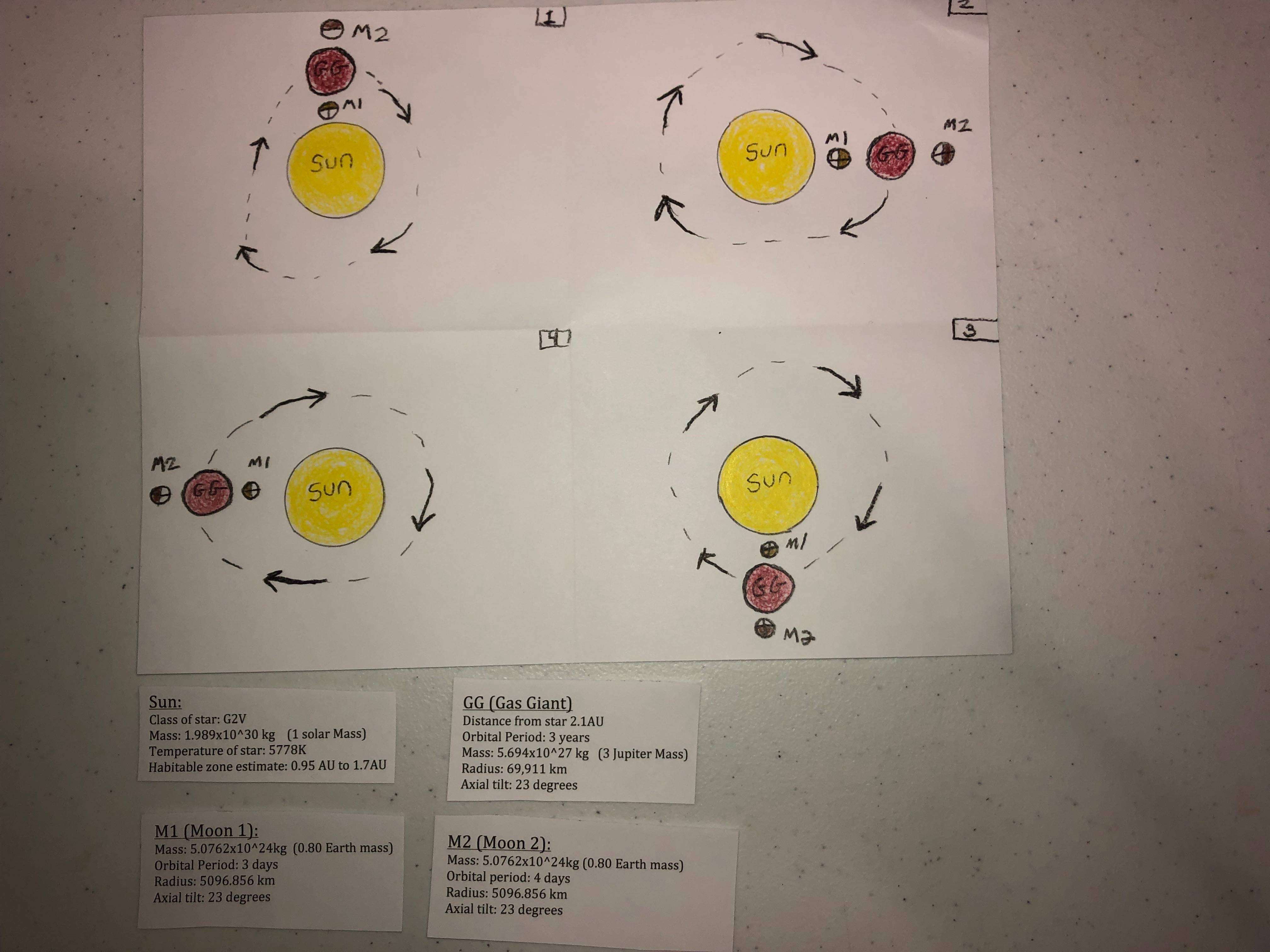 This is an edited hopefully more focused version of a question I asked a while ago. I made the mistake of asking too many questions the first time so I’ll try and be a bit more focused here.

I drew a quick picture of the system I had in mind. I want to know if these moons would be habitable. My understanding is that currently the way we determine if a celestial body is habitable, or not, is if it can maintain water on the celestial body in liquid form, which is why when looking at exoplanets we are so interested in knowing if the planet is in its star's habitable zone, since liquid water would be able to exist on the planet in said zone.

I drew a simplified solar system of sorts, which is not drawn to scale, just to be clear. It is drawn as if you are viewing the system from above so you are in essence seeing the northern poles of the moons and gas giant, just keep that in mind when viewing the image. If you start in the upper left hand quarter and follow the panels clockwise it shows one orbit of the gas giant/ moon system.

The shaded parts of M1 (moon1) and M2 (Moon 2) are the hemispheres that have landmasses.The land masses are actually near the equator, but since we are seeing the moons from above I couldn't really show the land masses.

The arrows show the direction the gas giant is going around the sun. I’m not sure if it should be going clockwise so feel free to correct me on that point. I have info about each celestial body on the bottom of the image.

Now to the question. Would the temperature on both moons allow for liquid water to exist year round on both moons? Both moons are outside of the star's habitable zone, BUT keep in mind that the moons are not just getting heat from the sun, they are also getting heat via tidal heating, the gravitational pushing and pulling on the moons by the gas giant and other celestial bodies in the system, and I also believe the gas Giant itself would be giving off some heat itself.

Welcome to WB-SE. I hope you shall find it a friendly place, and come to pronounce it "wubbsy".

There are a couple of unclear points on your question, so I'll make some assumptions: feel free to correct me.

1) When you say "facing towards" and "facing away", I presume that you mean only one hemisphere of each moon is habitable for some reason (perhaps the inward face of the outer moon and outer face of the inner moon are ravaged by tectonic tidal effects as they pass each other, making them uninhabitable?).

4) I'm gonna call "north" the same direction for all entities (sun, planet, moon), and assume that, looking down on to their north poles, all are rotating counter-clockwise, as in our solar system. Reverse west and east in the following if that's incorrect.

5) You are asking a very specific question about how will the light from the sun will reach the habitable hemispheres of the two moons, as they orbit. While you welcome corrections to the values in your system, you have already calculated them and are not asking for help with them, nor with a "calendaring system" nor with "habitable zones", etc. [Edit: this assumption is wrong, see edit below.]

If all of the above are true, then I think you are essentially correct: anywhere on the hemisphere facing the planet, you will always see the planet, and the sun will appear to rise to the West, pass behind the planet when the moon is furthest from the sun (which is "midday" for the point on that hemisphere closest to the planet), and then set in the East, with the darkness extending either side of that for a time which depends on the width of the planet.

That eclipse-duration is unlikely to be a precise one-third of the orbit, but can be calculated, by finding what the moon's orbital radius and the planet's radius is. Back-of-an-envelope, I think the duration of the eclipse varies with:

[Edit: I am skeptical of the above expression and will investigate further once I can obtain a better envelope upon which to doodle.]

That eastern point will remain lit until it enters the eclipse (it is on the trailing edge, and is the last to be covered by the planet's shadow).

For a moon's side facing away from the planet, everything is backwards (sun rises in the east, sets in the west, just like Earth, with longer days), and there're no eclipses.

On the outer moon, with the habitable face away from the planet, the tilt's the same as Earth's near enough, so has the basic same effect of giving "seasons", where the north or south is lit more or less than its counterpart. To the farthest north and south, in their "winter" they may not see the sun for months; and in "summer", they may see it from months on end, possibly with interruptions from eclipses.

On the inner moon, facing the planet, this is the same, with the additional effect that this will also affect the ground-track of the centre-point of the eclipse.

This means that, to the far north and south, you may have no eclipses at all during their "summers", depending on the radius of the planet. Again back-of-an-envelope, but I think that in summer you'll see over the top of the planet to the sun at the very northern of pole the moon if the planet's radius is less than:

You'll see no eclipses anywhere on the moon in summer and winter if the planet's radius is less than:

As the year wears on, the planet will take a bigger and bigger bite out of the top or bottom of the sun, until again the eclipses are total during spring and fall.

Hope that helps with the lighting of your system.

I do feel that this was an interesting astrodynamics problem, and the question could trivially be split to ask about it, and the other questions asked, if spun off, could be interesting in themselves.