Drawing landmasses for this odd-shaped planet

I've just come here for some help drawing a map for this fictional planet where two roughly similar planets have been smushed into kind of pear shape like this: 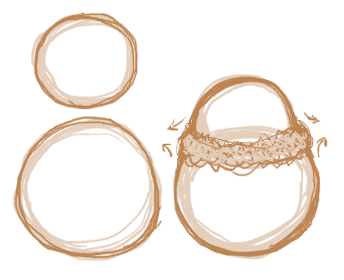 So this planet spins on an axis which runs through the center of the original planets, and their magnetic fields merge, as in the drawing: 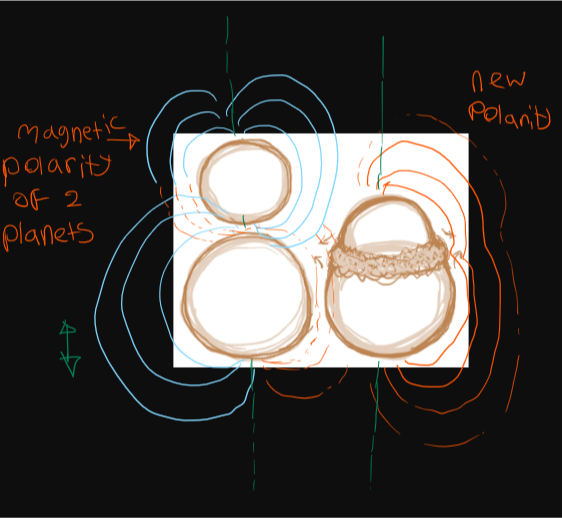 Would the ridge I've depicted where they meet remain an exposed mountain range, or would it fall beneath the oceans?

Also I want my alien race, zefusians, to live happily on this planet in a number of biomes such as snowy mountains, sparse forests, semiarid deserts, tropical islands and few volcanic hot spots without constantly getting natural disasters.

The easy answer is "yup! mountains!" the truth is more complex

Sometimes we get caught up too much in "reality." In "reality," this planet cannot exist as you've described. But what's the fun in that? Therefore, I'm going to utterly ignore all aspects of physics that would either (a) tear this planet apart or (b) force it to eventually become spherical. Instead, I'm going to answer the question from the perspective of your world and its rules.

All that mass must go somewhere

Your drawing (nice, BTW) shows about 1/3 of the small planet and 1/5 of the large planet being involved in the collision. All that mass had to go somewhere. A bit of it would be converted to energy during the fissionable component of the collision, but most of it is still there.

But what does that mean for my oceans?

That ring of mountains is not a universal, impassable wall. Clouds will move around and through it. That means rain. Rain means erosion. And erosion means you'll eventually have mountain passes. If the planet is old enough, it's plausible to have "cracks" in that ring of mountains that would connect the waters above with the waters below. However, for the most part, the waters will be segregated.

The northern and southern biomes will remain fairly segregated for a long time. Birds will get around that, and winds carrying seeds will, too, eventually. The older the planet, the more merged the biomes will become. But they will not be 100% segregated. As a wise man in a dinosaur movie once said, "life finds a way." But it finds it slowly.

Could anything have actually survived the collision?

Nope. At least it's mighty hard to believe. The earthquakes, dust, heat, yada, yada, yada... That was what I consider an extinction-level event. Cockroaches and dandelions might have survived, though.

And what about that magnetic field?

That's not actually how magnetic fields work. They don't follow the contour of solid mass unless that mass is entirely magnetic itself. And even then, they tend to smooth out. What I'm saying is that neat little tuck you show at the seam wouldn't exist. It's a small detail, though, and not very important.

What is important is that magnetospheres are thought to be created due in part to the churning liquid core — which was compromised in the collision. You can't have two independent liquid cores and over time you won't have a core shaped like your surface. Erosion, it would all smooth out inside, possibly even cooling to a thicker mantle at the north pole.

In the worst case, you'll end up with a spherical magnetosphere centered on the original larger mass that does NOT extend far enough beyond the northern pole. Lots of cancer at the north pole! Amazing Aurora Borealis, though.

In the best case the "center of the planet" shifts to something around the original tropic of Cancer1 for the original larger mass. It might very well be weaker (a consequence of that density increase I was talking about, the core is not as fluid as it once was... at least not yet. There's that age thing again).

But, it's your planet, so you might simply define the magnetosphere as you wish it to be!

So could life live there?

The smushed belt of mountains will remain mountains forever. Eventually, erosion would smooth them out and allow some passes to form, but they would never be consumed by the sea. Too much mass involved in the collision.

1 The tropics of Cancer and Capricorn aren't simply the 1/3 points of the sphere, they're defined by the solstice events, which are a consequence of the Earth's axial tilt. I'm using the Earth-reference as a literal map reference for convenience to help you imagine the point I'm talking about. Heck if I know what the original mass' tropics were, or even if it had them.

Alright, I'm not an expert, but I've watched a few documentaries on planet stuff.... here's my best shot:

The center of gravity will move toward the point between the two planets, and the water will always drift toward the center of gravity. The mountains between the two spheres might not be totally submerged, but they will be volcanic and subject to frequent earthquakes/eruptions, so they will be growing as the planets merge together over time and become more spherical. This relatively rapid change in shape ("relatively" rapid, but still very slow to observers), will result in extreme weather patterns across the whole planet; your storms will be really hardcore, and the waves on the shores of that big ocean will be huge all the time. Sailing on that ocean will be very dangerous, and using a boat to get from one planet to the next will likely require finding some small passageway in the volcanic ring.

Any water on the far-end of the planets will only remain there if it is collected in basins, preventing it from flowing toward the joining-point. The air on the far ends of the planets will be very thin ("high altitude"), so the far ends of the planets might be icy, too, and that will prevent all the water from totally escaping. The massive ring of volcanos between your planets will warm the water there, and release a lot of steam, so depending on whether or not you have a moon and how it affects your wind currents, the areas nearby the coast (which get wind from the ocean) might be very warm and humid year-round, while other areas near the coast which don't get the warm wind, but still get shrouded in steam, might be very cold for lack of sunlight. The middle area between the joining-point and the far-end of each planet may enjoy a wide range of climates, so you could easily find all of your biomes here.

Any bodies of water on the surface of the planet will lean toward the center of gravity, so the middle region between the ends and the joining area will not likely have large bodies of water, unless they are inside large craters, or leaning up against mountains which were already on the planets. Likewise, people traveling from the middle to the end of the planets will feel like they're going uphill for almost the whole journey.

6
Gravity/Ecosystem on a peanut-shaped planet?
7
Program for drawing maps in correct scale
2
Tools for drawing on (Google) Maps
12
Realistic Landmass Formation on Torus-Shaped Planet
3
Biomes and landscaping this odd-shaped planet (part 2)
4
How Can I Draw a Realistic Topographic Map?
5
Could this uniquely shaped planet exist?
5
Landmasses on a planet with enormous tides