Could a Stanford torus rotate on an additional axis to give it a diurnal cycle?

Suppose you have a regular old Stanford torus space station with a 'glass ceiling' rotating at 1.3 RPM. Put it in orbit around a star such that its axis of rotation intersects the star (in other words, the plane of the torus is tangent to its orbit).

Now add another axis of rotation along that tangent, such that it 'flips' around at 1 revolution per day (RPD I guess!), giving the station's inhabitants a regular human diurnal cycle. Obviously the regions at the nodes would be pretty much in constant shadow, but those areas could be used for storage etc. Further, there would be a "noon shadow" for the sunlit side when the night side eclipses the sun, but I guess that's ok.

Would there be any specific problems with this? Has anyone ever written about this or implemented it in fiction? I suspect it would further complicate the Coriolis and similar effects...

Further edit: This is pretty much exactly the effect I'm looking for: a very slow tumble w.r.t. the sun so that the inhabitants are experiencing something vaguely like a day/night cycle. I can use active propulsion to create the torque analogous to the added weight in the video.

The problem with this is that you would need to continuously apply forces on the space station to make it do what you describe (and if you weren't careful it would also do things you might not want).

When a rigid body rotates freely, the axis of rotation remains pointing in the same direction unless an external torque is applied. As soon as that torque is stopped, the axis becomes fixed again. This is exactly analogous to how a body moving in free space will maintain a constant velocity unless a force is applied to it.

If you try to

"add another axis of rotation along that tangent"

by any temporary application of force/torque then either of (or both of) two things will happen.

The space station may change its axis of rotation (i.e. the direction the stations' 'axle' points to relative to its orbit will change - possibly as you desire) while the force is applied, but will then remain fixed in a new but static rotational axis as soon as the force application ceases.

Or the space station will develop a wobble so it no longer rotates around the its normal axis but instead about some arbitrary axis at an angle to the 'axle' of the space station. This would be undesirable because the 'artificial gravity' effect you get from the centrifugal forces of the space-station's rotation would no longer be perpendicular to the floors of the station.

In response to your question below

Right, I'm willing to allow an arbitrary amount of active propulsion to provide the necessary torque (and I added this note to my question). Given that, is it roughly doable?

Yes, it is then doable. For the space-station to remain in a stable circular (?) orbit, you would need to apply equal and opposite forces at the two ends of your 'axle'. With the space-station oriented as you suggested in your question (that is to say, with its axis of rotation in the plane of its orbit, the forces would need to be perpendicular to the plane of the orbit. See the pictures below... 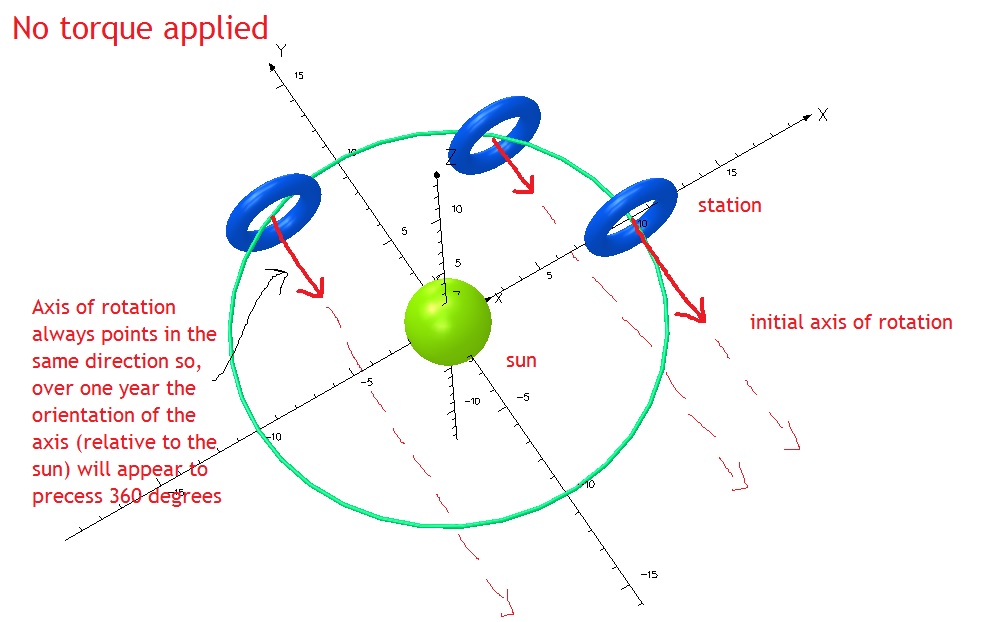 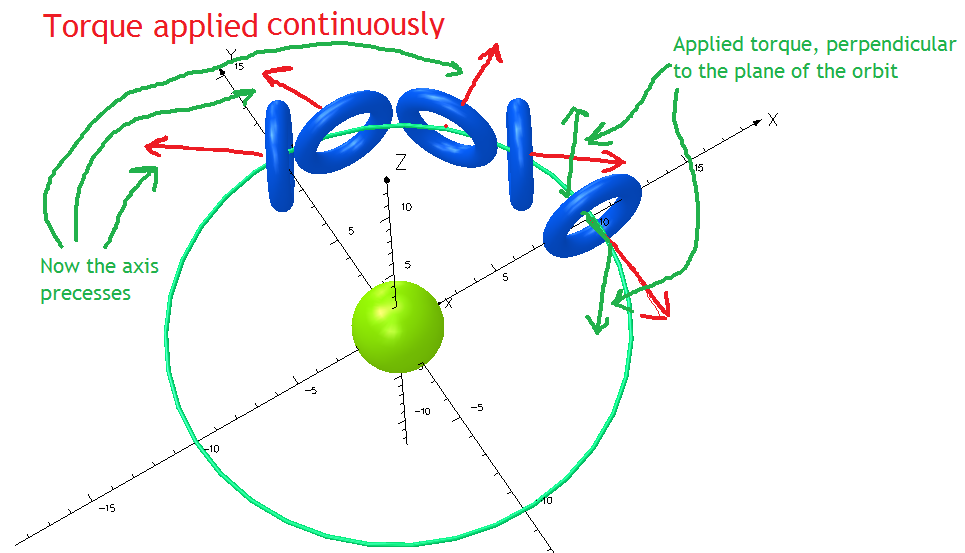 What you want is to have zero or low axial tilt. In this case the day and night cycle works just like on Earth but in reverse. The side of the torus towards the Sun is blocked by the body of the torus and in shadow. The side away from the Sun, if it has windows in the ceiling, gets sunlight because the other side of the torus is not wide enough to block the Sun. Although that depends on the geometry. But since you are the one designing the station...

It would actually be better to use fiber optics to route light from the outer surface of the torus to the inside ceiling. This would allow robust radiation filtering and remove need for windows. No windows is good because apart from routing for the optic fibers you could then build the torus from the best materials and structures available which probably will not be transparent.

The needed technology is actually already on the market.

A Stanford Torus acts like a large gyroscope, it spins and in that spin it is stable, it also generates "gravity" into the bargain.

You're trying to introduce the complication of a second axis of rotation, but that's not actually so bad as you have a gyroscope, and gyroscopes exhibit an awful bit of behaviour called gyroscopic precession that we're now going to exploit.

If you apply a force to the axis of the gyroscope your station will start to precess. It just doesn't rotate in the direction you'd expect relative to the forces you're applying as you need to do is apply the force perpendicular to the direction of the intended effect. I won't go into detail about how this works as I'm not entirely sure I understand it, but ultimately your answer is yes, you can spin it on a second axis without the whole thing destabilising.

As to whether that would give you a diurnal cycle, not really, you'll get a greater diurnal effect from angling the primary rotation relative to the star than you will from spinning such a structure on any plane perpendicular to the axis.

My first thought was that you could add a weight sticking out of one side of the central axis and place it in a 24 hr orbit using tidal locking to turn it.

While this experiment (https://space.skyrocket.de/doc_sdat/dodge.htm) proved that you can tidally lock a satellite, it took 12 days without any gyroscopics trying to keep it in line; so, this would not work on a spinning station which would actively oppose the tidal locking forces.

A second option would be to bind two station rings spinning in opposite directions. This would cause them to cancel each other's angular momentum making the station easy to spin either via maneuvering jets or tidal lock. But this is also problematic because the central axis that binds them would experience the massive torque forces of the combined rotations which would likely snap anything on this scale.

Then I found this (https://www.youtube.com/watch?v=vGun5athdfg). If you place two rings rotating in the same direction around a central spindle it becomes twice as easy to turn. If my understand of this phenomenon is correct, then this means the station would be easier to tidal lock or manually rotate than a station without any spinning components without creating any major stress points.

So, using this information:

If this station is in orbit of the Earth (or another planet), all you need to do then is face the windowed walls of the gyroscopes pointing away from the planet, and make the "heavy" gyro bigger and slower moving create equal gyroscopic forces but unequal weight distribution. This will help tidal-lock the station. The big ring will experience some minor eclipses in the mid-morning and evening hours, but these should be relatively minor. Otherwise, your station will experience the sun moving across the wall the same way we experience it's movement across the sky.

If this is a deep space station, I'd suggest tidal locking it to the sun to avoid long cold winters when your station is stuck sideways for months, then just using shutters to create day and night since turning it manually for a day night cycle would be many many times as power costly.

Not the answer you're looking for? Browse other questions tagged science-based science-fiction space-constructs day-night or ask your own question.

3
Axis of rotation of a wheel space station

18
How would long-term exposure to artificial gravity (as generated by a Stanford torus) affect human evolution?
7
How could a planet have a 40 hour day cycle with its nights only lasting 3 hours?
5
How could a creature move through space realistically without any additional technology?
3
How fast could Earth rotate and continue to support life?
12
What would make scientists realize that they are on a toroidal world?
2
Could a habitable tidally locked planet have a day and night cycle caused by the eccentricity of its orbit?
5
Could a torus shaped black hole exist?
2
Could A Torus World Have Rings?
7
Effects of Red Dwarf CME (Flare) on Biological Life and Atmosphere
4
How could I scientifically explain a world with day/night cycle only on the equator?