I seek to build a habitable moon of a giant planet, thus I looked at the Rouche Limit Equation to figure out how to get the biggest possible Hill Sphere for my moon to exist in.

If I interpret the formula right I want to set the secondary objects orbital eccentricity as low as possible, the mass of the star has high a possible, making the lifetime and the spectrum of the star along with the impossibility of planet formation around O and B stars due to photoevaporation the limiting factors. Since the mass of the star is related to its temperature and so to the position of the habitable zone I included this in the calculation of the optimal stellar mass.

This leaves me with the mass of the planet which should be as high as possible. For a gas giant, this would mean 13,8 Jupiter masses. However brown dwarfs offer a much higher mass of up to 0,08 Solar masses before turning into red dwarfs. Given the formula above it is obvious why it seems tempting to use a brown dwarf instead of a gas giant. I´m somewhat at a loss at classifying this system since brown dwarfs are neither planets nor proper stars, so any clarification on whether this is a binary star system or a planetary system would be appreciated.

I have come up with a number of potential benefits and issues by myself, yet I would appreciate it if someone who is more knowledgeable on the subject would check my assumptions and point out what I missed.

In the end, I´m interested in whether a Brown dwarf is superior to a gas giant as the host planet for a habitable moon.

One possible problem with just a plain ol' Gas Giant is... radiation.

From Quora: Jupiter’s magnetic field is the largest out of all the planets in the solar system. It probably has a huge metallic hydrogen core (still a mystery). The magnetosphere extends millions of kilometers into space all the way to Saturn on one end and millions of kilometers in other directions. It's because Jupiter’s magnetic field is so intense, which would not be that dangerous in on itself, that a much greater amount of the deadly charged particles get trapped, be it from the Sun or Io’s volcanic activity. Those particles literally keep accumulating and residing within the Jupiter’s magnetic fields, forming the so-called radiation belts.

Gas giant moons are easy. For scale, Jupiter's outermost big moon (Callisto) is within 5% of Jupiter's Hill radius. Move Jupiter in to the Sun's habitable zone means dividing its orbital distance from the Sun by about 5. So if Jupiter was in the Sun's habitable zone (and all its moons too), Callisto would still only be at about 25% of the Hill radius, meaning that all four Galilean moons would be perfectly stable. When I wrote a blog series called "Building the Ultimate Solar System", I argued that five large moons around a gas giant was a conservative number. (Blog post here: https://planetplanet.net/2014/05/22/building-the-ultimate-solar-system-part-4-two-ninja-moves-moons-and-co-orbital-planets/)

Brown dwarfs are a little tricky. They start off burning deuterium (and giving off plenty of energy), then they cool off and fade in about a few hundred million years (see image below, with inward-moving habitable zone as the BD cools off). Why does this matter? Because if you want a planet to end up receiving the right energy from the star (assuming the BD is in orbit around a star), then the planet will necessarily be roasted for the first several hundred million years of its life. Will that mean its water will be lost to space? Maybe -- it's hard to calculate precisely.

Does this answer your question? 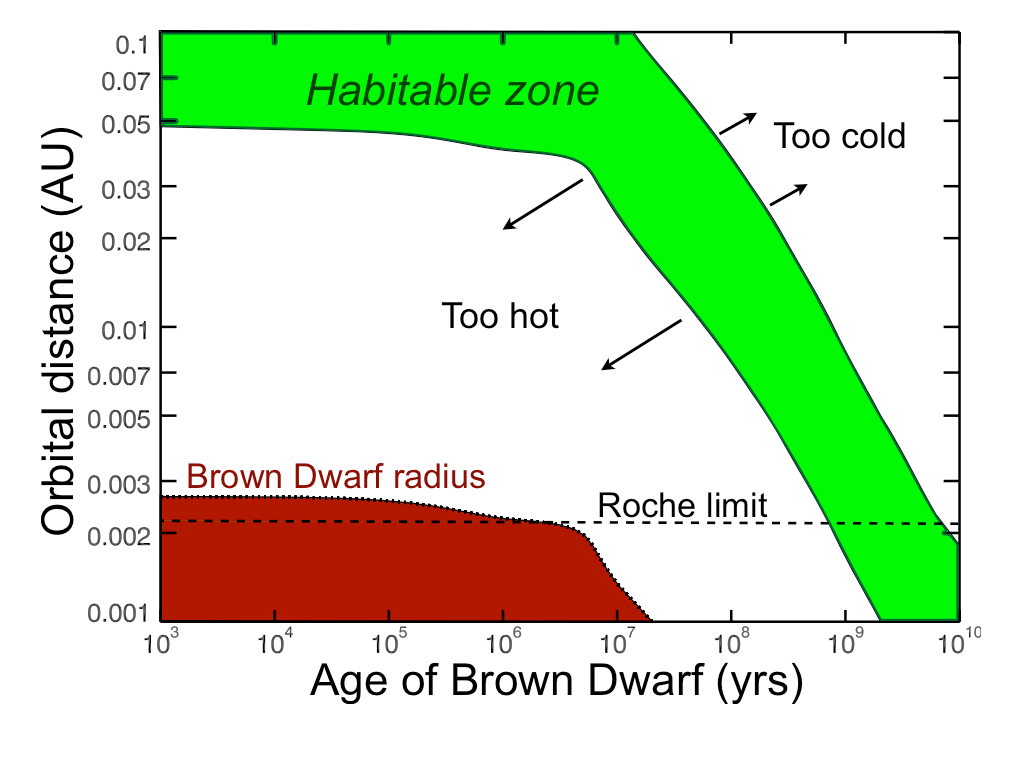 25
Can a gas giant have its own habitable zone?
40
Habitable moon of a gas giant: working out the sizes and distances
23
Realistic sky of an Earth-like moon orbiting a gas giant (length of day and size of celestial bodies)
20
Can a habitable moon rely on the magnetosphere of its parent planet for radiation protection?
3
Feasible star + planet + moon combo? Did I miss anything that makes this system wildly unstable or otherwise impossible?
2
The major effects on the habitability of exomoons orbiting this Brown Dwarf
6
What conditions to make this habitable moon plausible?
4
Logistics of habitable moons orbiting a brown dwarf