They can very well run continuously, accumulating lactic acid without pain. There's no thermodynamic limits for them, besides that they can do whatever a normal human can do physically.

They feel no pain and have the IQ between a cockroach and a anemone. In other words they are purely reactive. They seem to not have immune systems, so they rot under anything that consumes flesh. They only stop moving when they are out of muscle tissue.

The difference in speed is due to activity in cerebellum, its a matter of remembering how to run. The smart variety still remember how to do trivial tasks like opening doors. The dumb ones can only run towards a target. If they lack a leg they will be unable to stand up, walk or run. They have no tactics whatsoever.

Given a standard occupation roman army from Caesar or Augustus time, and a horde of archetypal zombies, how would the roman army fare versus the zombies? What tactics should be used ?

The Romans could equip themselves with better arm and head armor and do quite well against the zombies.

Since the zombies are unarmed and unarmored, the only major threat they pose to the Romans is the threat of infection due to biting. The Romans need to make sure the zombies are dead before they can get bitten. 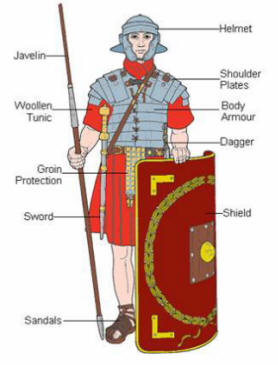 A standard soldier, as seen above, has roughly the following equipment:

This protects fairly well against most of what a zombie can do, and gives the soldiers a quick way to take out a zombie via slashes and stabs to the head. The one danger is that, while slashing, an arm could be bitten, since a standard Roman soldier has no arm or hand armor. With this armor, a Roman soldier is unlikely to sustain significant damage unless the zombies can overwhelm the Roman shield wall.

Luckily, or zombies are incredibly predictable, and we can use this predictable nature to deal with them. We know that they will run continuously towards humans, without paying to much attention to where they are running. We also know that they don't run any faster than normal people.

Our soldiers should start by preparing an area for slowing down an approaching zombie horde. Trenches, caltrops, and small walls of pointed sticks can be erected as a barrier, with a path wide enough for a horse to ride through left clear down the middle. Horse-jumpable obstacles are fine on this path. Once the fortifications are done, the Romans should send mounted soldiers out to go find some zombies. We know that the zombies will follow the horses, so the horses can lead them back to our fortification.

Our horsemen need only to lead the packs back through the fortified area towards our entrenched infantrymen. As the zombies slowly mangle their way through the fortifications, with our legionaries hacking them apart on the far side. The fortification need not stop our zombies, only slow them down sufficiently as to not get our shield wall overrun. Pila thrown by the rearward ranks of the army will further slow the zombies down as they approach.

Since legionaries have bare legs as well, they'll want to retreat in waves to keep some space between themselves and fallen zombies. After each battle, hack apart and then burn all of the dead from both sides.

The key issue for the Romans (assuming the usual zombie tropes apply) is that most Roman weaponry isn't designed for destroying zombie brains.

The initial wave of zombies will be met with a shower of pilla. To the horror of the Romans, the spears will stick out of the zombies, but they won't be stopped for the most part (a few will be pined to the earth, but obviously still capable of motion). As they close in, the Romans will move to a close formation and draw their short swords. In contact, the Romans have been trained to make short stabs into the torso of the enemy, which zombies will simply ignore unless major muscle groups are severed.

Once again, following standard zombie tropes, the Roman shield wall will be overwhelmed and pushed over. Many Romans will be infected (although because of the armour, a lot of Romans will not be eaten).

Now follow up forces will have a problem, not only will their usual weapons and tactics not be effective against zombies, but some (a lot?) of the oncoming horde will be armoured, and thus even more resistant to Roman arms.

The Romans have a few things in their favour. Because they were great engineers, they have the ability to build defences against the oncoming zombies with enough time. The zombies will find large ditches, walls and abiti of fallen trees blocking their advance, and they will not have the awareness or ability to overcome obstacles except by filling ditches with their bodies.

The Romans can also pull out siege engines (once again with sufficient time and warning). Zombies might not react to a sword thrust or pilla impaling them, but being crushed by large rocks falling from the sky will certainly destroy their brains. The Romans also have access to fire, once again with enough time and warning they can fill pots with oil and send fire against the zombie horde, burning a lot of them and cooking the infected brains.

So if the Romans have an idea of what they are up against and sufficient time, a legion could throw up a wall and ditch around their position, and use siege engines and fire to destroy the zombies that are trying to eat them. A relieving force will need to have sufficient siege engines and ammunition to clear the fortified position of any zombies left after the garrison ran out of rocks and oil, before marching up and freeing the trapped garrison.

The Romans were good at adapting strategy and equipment. During the Dacian wars, they added arm protection and shin guards to the equipment, and it's no reason to believe they would not do the same after the first encounter with the zombie horde (if the fort did not fall to the infection...).

Next would probably be switching out the gladius for a weapon more suited to decapitating/skull crushing. Dolabras (mattock axes) would be available right away, but my guess is they would eventually settle on falcatas or something similar. The shield would be very useful, but the pila next to useless.

The Romans would probably approach this an an engineering problem. They would need a series of small zombie-proof forts along a stretch of road to the next trade settlement, in the style of Hadrians wall. A couple of big ballistae with Greek fire would probably be able to secure a safe zone for constructing a fort. Once a new field fort was built, the ballistae could be moved forward, allowing for a new one.

The strings of forts would eventually be linked by a double palisade-protected road, eventually upgraded to a raised road (a viafer) similar to an aquaduct or the Wall of China. Not only would it allow for safe traffic, it would also be a suitable structure to depose criminals, deserters and the occasional religious dissident from.

Not the answer you're looking for? Browse other questions tagged reality-check ancient-history zombies .

27
Zombie perpetual motion machines
12
Zombie perpetual machines - logistics
44
Zombie army is bad idea. But why actually?
31
How do the zombies win when they're so weak?
2
Military Structure/Chain of Command (Army)
38
How practical would a zombie horde actually be in medieval setting
7
How would a "zombie fungus" work on humans?