What is the largest I can make my water planet, while remaining within Earth-like parameters?

What is the largest planet I can get, while still remaining within Earth-like parameters? My concern is with gravity, water pressure and atmospheric pressure. Escape velocity is less of a concern. Available elements in areas accessible for human resource collection should be somewhat Earth-like, but the composition of the planets inside is less important, as long as it is plausible.

I would like to create a planet that is mostly covered in oceans, with optionally some small islands sticking out above the ocean's surface. I would like to see as large a volume of the ocean being accessible to a human-like culture as possible. So, basically the question is about maximizing the accessible ocean volume, on a planet where humans can reasonably comfortable survive.

These humans have a technology level we could think plausible for the year 2,200 or so (sci-fi, not sci-fantasy). These humans live in underwater settlements, towns and cities and travel between them is submarines.

While this is not a hard-science question, I would minimize the liberties that have to be taken, to get the largest, human inhabitable, ocean planet possible.

Models of planetary structure indicate that ocean planets should reach peak size at a few hundred to a thousand Earth masses, reaching maximum radii of perhaps 4-5 Earth radii. Add in some iron and silicates and you decrease the size slightly. Indeed, this mass range features peak radii for planets of most compositions; go further and the planets shrink.

I made a plot of some mass-radius curves for a pure ocean planet and a pure silicate planet, as well as curves for planets with surface gravities of $g$, $2g$, and $3g$. Your planet should be in between the $\text{H}_s\text{O}$ and $\text{MgSiO}_3$ curves, given that solid land requires some solid materials, and arguably continental plates of some sort. 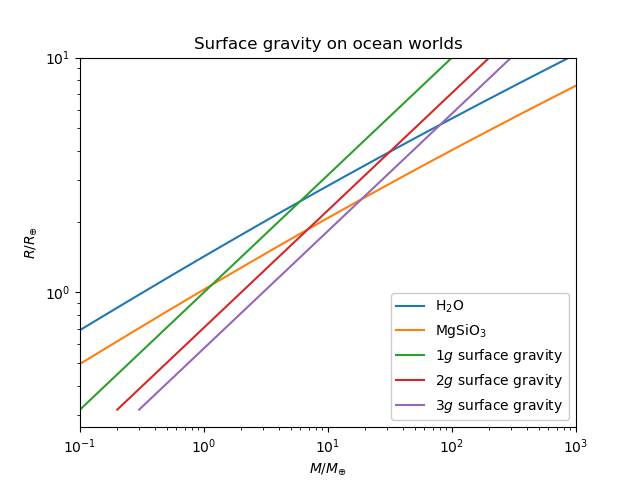 Earth-like mass, radius and surface gravity usually means an Earth-like atmosphere insofar as it should be composed of heavy gases like nitrogen and carbon dioxide. Small planets like water worlds typically do not hold onto hydrogen-helium envelopes for very long, losing them to thermal atmospheric escape.

Not the answer you're looking for? Browse other questions tagged science-based planets science-fiction earth-like ocean .

13
Would it be possible for a city floating on water to exist?
6
Could there be an upside down hurricane on a gaseous super-Earth
16
How could an Earth-like planet develop huge pinkish-purple forests on ocean surfaces?
8
How would underwater weaponry and technology look under high pressure?
6
Low gravity planet, giant creatures?
8
What would happen if we built a huge cofferdam around Hawaii and drained the water?
0
The plausibility of this atmosphere? and what the problems that it case?
5
What is the largest achievable oxygen-atmosphere world?
7
What would be the largest animal that could exist within a grassland ecosystem dominated by machines?