What sort of qualities might a tortoise-like animal the size of an Argentinosaurus need to support its own body?

I am wondering what kind of physical qualities (e.g. short, thick pillar-like legs) a creature such as this would need to support such an incredible size. The world that it evolves on is almost identical to Earth save for the surface, which is mostly covered in thick, giant, interlocking trees. The shell must be as it is in the image as it is an important plot device.

A reference to the creature in question, or at least a poor representation of it, is shown below. 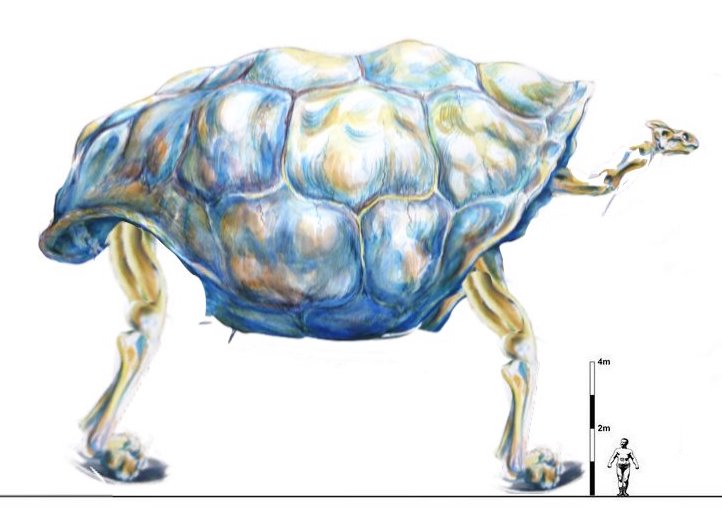 This image is poorly edited and does not represent proper anatomical proportions. Namely, the legs, which should be much thicker and stockier. As well as the head and neck vertebrae.

A larger body means dealing with all the caprices of gravity. This problem has been addressed in the future is wild series. The toraton is a descendent of the tortoise. Its legs are much thicker. They are set-up under the body, not on its sides. It can no longer retract into its shell, but the shell is still useful in supporting body and muscles.

Lose or at least heavily reduce the shell, it would probably weight too much for an animal of that size and it wouldn't be needed for defense anyway, barring some truly fearsome predators. I see you already made the legs more pillar-like, so no need to change anything there. Sauropods in real life used a complex system of internal air pockets to reduce their weight, turtles don't have anything of that sort in their evolutionary line, so as a rule of thumb make the animal a bit less voluminous than a sauropod of similar size. Huge guts for digesting huge quantities of plant matter are also essential, as at that size it will need to rely on quantity over quality to keep itself fed.

There are two good ways to have animals become larger.

The first, is cooler temperatures. Animals tend to become bulkier with shorter limbs in order to conserve body heat, see: Bergmann & Allen's Rules. Bear in mind that cold-blooded organisms like tortoises may not be able to survive in colder conditions.

The second option, is higher concentrations of oxygen in the atmosphere. This is believed to have contributed to the evolution of very large arthropods early in the phanerozoic, as well as the appearance of larger mammals in the Cenozoic.

If the shell can slide, then you have no problems. The shell supports the mass, and the legs are basically used to propel it: they are rams/paddles to push it forward or rotate it, rather than struts to support it.

Unfortunately, a big, cumbersome shell is the worst option for maneuvering on a tree-covered planet ...unless something is big enough that it can push over trees.

Oh hey, you know what stuff slides really well on?

Stuff slides really well on logs. Trust me, I've been a lumberjack. Especially when it's wet, such as in a rainforest, wood is super slippery. Vegetation in general, in fact. Slippy, slippy, slippy.

We humans use logs for rails, and they're great, at least if the wood is long and straight, like rainforest trees.

Now, branches might get in the way, but a vegetarian behemoth that knocks over trees could both eat them out of the way, and snap them off with its bulk. They're not an obstacle, they're lunch.

Child-tortoises would be able to walk and forage just like regular tortoises, but past a certain size, they'd be unable ot fit between the trees. These adolescents would likely need to follow tracks laid by their larger elders, filled only with saplings and younger trees, until they can push over their own trees.

So "tortoise roads" would likely form in this way, long paths of younger trees that would be easier for these beasts to travel through the forest, forming loops that might take a lifetime, from their egg-laying-grounds and back.

These roads would become small smooth valleys across the land, attracting water and becoming slicker and easier to slide in. Younger tortoises might avoid them (bad to be stuck in a slippery gulley filled with water that you can't climb out of) and might take other paths through the undergrowth.

Backtracking will likely be harder for them the larger they grow, as it's easy enough to slide down from an uprooted tree's bole to the canopy, but harder to make your way back up against the direction of the branches and up over the root bole.

So if they get stuck in a circle of cliffs or trees too large for them to handle, they may become stuck, and possibly die, once they have eaten the foliage around them. Another reason to stick to the tortoise roads.

Similarly if they get bogged down, but again, felled trees will help them there, spreading out their weight. Trees are extra-slippery in the wet, too. downside is, there's little stable ground to push against with your feet to make yourself slide.

There's a reason for some at least to branch out from the tortoise roads, though. If a road has been stripped bare by previous tortoises, then the next one to come along will have to find another path, if its lucky finding some older but still not-too-overgrown road; otherwise perhaps finding a gap where one of the great old trees had fallen, clearing a new path.

Similarly if a road had become too swampy.

And similarly, I suspect, if two tortoises met. The one behind, having nothing to crush and little to eat, is likely to be making its way along the road rather more quickly than the one in the lead. But since they are large, it cannot simply walk past the leader. So, other than perhaps a brief stop to mate, they'd need to split off and find their own way.

A third tortoise, coming to this fork after the others have passed on, might prefer the new-trodden path as being more verdant; or the older path as safer and more reliable. I guess it'd depend on the personality of the tortoise.

Now, ideally the beast would have a far longer keel than is afforded by that shell, for more weight distribution when sliding. But the body can provide a lot of that. And ideally the front of the shell would be of a shape suited to pushing over trees. The forelegs could be good for digging, to weaken and rend the roots on the near side of the tree, the better to push it over.

Of course, if the trees are truly ginormous and distantly spaced enough that even something this size can dance between them, then none of this might be an issue anyway.

Even then, the core answer ("the shell is a sled") still remains.

If it doesn't need to be a turtle specifically, then it could be based on an actual large sauropod. To reduce weight, it may produce methane in its stomach and store it in its air-sacs like an organic, land-bound zeppelin. This would likely be enough to hold up a turtle-like carapace. This would work well, as sauropod limbs stopped at the sides of the body, and so the legs would not be in the way of any necessary rib-ends

Not the answer you're looking for? Browse other questions tagged creature-design xenobiology reptiles .

11
Dragon's Blood - If it was a realistic animal what would be the color of its blood?
3
What sort of legs would a 1-ton pig neeed to support its body weight and move in short bursts of speed?
9
In what sort of environment might a species with biological wheels evolve, and what would they look like?
4
What needs to be changed in the structure of the human body to be able to drink salt water and at the same time conserve water like camels?
9
Is this creature's proportional head size feasible?
9
What danger would a mummy pose if resurrected where they need to cover/protect its body?
3
What sort of Life Form could my Creature Excrete to Make Its own Habitat?