Would a person be able to punch a truck away, if his ability was to subvert "Newton's 3rd Law of Motion"?

I'm struggling with the physics here a bit since I'm a complete novice at this. I'm making a character who's main ability is to subvert/play around with the 3rd Law of motion (For every action, there's an equal and opposite reaction)

In my understanding and logic, If a normal person punches something significantly bigger than him as a truck with all his energy, he would end up messing up or worse, breaking his own knuckles. However, if the moment his knuckles made contact with the truck(action), he was able to negate/reduce significantly the force being exerted back(reaction), he could blow away the truck with his punch.

My question is, if an individual has the ability to negate the reaction/ backward force of an object after he applied force on it, would he be able to send them flying with his punches? And would an object that received such a punch get damaged from the punch?

science-based science-fiction physics
Share
Improve this question
asked May 1 '19 at 15:35

You have a pretty beefy top floor, and so maybe you punch harder than me. Maybe I move away a little more than twice as fast as we moved in #1. But not 10x as fast or 100x as fast. You are not that strong. You are not punching trucks into the sun unless you train really hard, like 100 pushups. At the end of the day you are moving me with your own strength. You somehow circumvented the third law but you keep the second: F=ma.

Yes, but this power implies more than that

Not only would his knuckles not be hurt, not only would an incredibly powerful punch not push him off his feet, but...

If objects do not exert an equal and opposite reaction, his punches never lose momentum. He could punch the Earth, and his fist would keep moving. Depending on how finite his control over his power is he'd either launch himself upwards (equal but opposite force on his body) or his fist would simply move through the earth at its speed.

Since nothing will push back on his punches, nothing will stop, resist, or slow down his punches. He should be able to punch a diamond wall, and the wall will either move or break under his fist.

Nobody can lay a hand on him.

And if his power is a "all on" or "all off" deal, he won't be able to even walk (when on), as he won't be able to push off the ground for a step. I'm not exactly certain how gravity itself would factor in. Possibly he'd be drawn to the center of the earth, straight through the crust?

Without breaking some additional Laws of physics, the answer is no.

The truck has inertia meaning that the truck will follow Newton's 1st law until an adequate force moves it as per his 2nd law. If your fist does not have enough force to move the truck, but cannot be stopped by an equal and opposite reaction, then you face the age old question of what happens when an unstoppable force meets an immovable wall.

The only logical outcome here (despite sounding illogical), is that your hand passes harmlessly through the truck. Hurting neither you nor the vehicle. ... well, you might still hurt the vehicle as much as punching one normally does since you still have the force of your punch you can apply to it as per the 2nd law, but this is very little by vehicular movement standards. 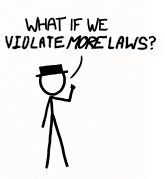 Now if you can also violate Newton's 1st Law of motion, then your punch can ignore the truck's inneria allowing you to send it flying at 6-21 m/s depending on how good your jab is. Depending on how you interpret this one, a second possible outcome is that you can only send the few square inches that contacted your fist at that speed. Because the contact area is so small in this case, you'd leave a deep dent in the vehicle like it got hit by a fire hydrant at highway speeds, and you'd probably flip the thing pretty nicely, but if you want any range, you're better off picking it up and throwing it like a giant discus.

Now let's say you can also violate Newton's 2nd Law of motion. You can now accelerate things faster than you hit them completely destroying any concept of conservation of energy. So if you choose, your 6 m/s grandma punch could accelerate the target at the speed of light. For reference each kg of matter contains the equivalent energy of a 21 megaton hydrogen bomb when accelerated to that speed.

Again there are a few ways to interpret this which are significantly different in scale: If we again assume that this affect only happens at the point of impact, then things are not so bad. As soon as your fist touches the truck, molecules become so excited that they are turned into energy with 142 times the efficiency of a hydrogen fusion reaction. Your first assumption would be that you'd level the city, but thankfully your fist is going much much slower than the explosion you are creating meaning that you'd only accelerate the truck as a whole until it is moving faster than your hand at which point there is no more contact to add to the reaction. This would send the truck hurreling off just slightly faster than your punch leaving the truck a smoldering mess, but the city still standing.

Now for the real nasty question... what if you sent the whole truck flying off at the speed of light? I hope we are all picturing relativistic baseball now. The maximum legal weight a fully loaded 18 wheeler truck is allowed to be in the US is 80,000 lbs (36,287 kg) If you can convert the whole truck into energy you're looking at a 762 Gigaton explosion or roughly 500 times the force of the yellowstone supervolcano eruption that nearly killed off mankind 640,000 years ago. Thats a few orders of magnitude shy of the Chicxulub impact, but still not very good for anything that enjoys being alive.

Since this part is technically getting off topic, I'm gonna skip the whole contact only thing and pretend your "Hero?" decides to punch the Earth into light speed. The Mass of the Earth is 5.972 × 10^24 kg meaning that punching it would create a force equal to a 1.254 × 10^26 megaton explosion which is only two orders of magnitude shy of a type 1a supernova.

This power essentially allows the character to ignore any force they want. It's going to require a "smart" system so that the character doesn't either a) fall through the Earth because the ground can't push up on them, or b) float off into space, because gravity can't pull down on them. Thus, the power will need to be "intelligent" enough to prevent that happening. It also might want to include their clothes as part of them as well.

Anyway, before we start talking about tossing trucks around, let's talk about something else: bullets. Let's say that a bullet hits the character. What's going to happen? Well, when the bullet gets close enough to touch, the electrons in the bullet are going be repelled by the electrons in the body. The electron in his body are not. The bullet is going to bounce off without them even noticing it (because there's no force directed towards the nerves that sense pressure.) The character will become numb when this is active, and everything is going to bounce off them(or just deform and fall off.)

With big things, the impact area will bounce. How the rest of the object behaves will depend on the properties of the object. If they punch a truck, the truck will get a big dent in it, but not more than that. Trucks just aren't that rigid. Try punching a sheet of aluminum foil and you'll see what I mean. If the character is running and hits a motorcycle, it might fly off into the distance, but it'll also be folded around the impact site. When braced against an object, the character can generate effectively infinite strength.

Not the answer you're looking for? Browse other questions tagged science-based science-fiction physics or ask your own question.

13
Is it possible to make a logically consistent set of laws that produces physics similar to that in superhero comics?
6
How can a substance that doesn't follow the laws of physics look and feel like ordinary matter?
8
What mechanisms can I use to instantly materialize an object?
2
Applications of Limited Kinetic Energy Manipulation [Superpower]
1
What could a person able to re-arrange their muscle strength accomplish?
1
How would a person be able to attain superspeed if they could subvert Newton's 2nd Law of Motion?
72
How can powerful telekinesis avoid violating Newton's 3rd Law?
3
Can I improve internal combustion engine efficiency by slightly changing vacuum permittivity?