What minerals that are more durable than calcium would be suitable for bones?

Edit: I am asking in the context of alien life, should have specifyed that to begin with.

I have many ideas for fantasy/sci fi races, and one that I kept coming back to is a species with bones that are based on an element other than calcium.

Is this possible and what would a good element be?

Bones are really fantastic, from an engineering point of view. We intensively use them for 80+ years with practically no big issues and they can even self repair, while whatever thing we engineer design is prone fatigue and wear.

This awesomeness doesn't come from the particular element which is used to make them, but from the peculiar way in which they are made: instead of being built once and forever, like we do with any metal beam, they are constantly demolished and reconstructed by the body cells (osteoblasts and osteoclasts), so that, effectively, your bones today are not the same bones you had one year ago.

This means that fatigue like we know in metallic alloys is less of a concern, as any microscopic damage is wiped out by this process. And by using this process we also see how the bones can self repair! And you thought that painting the Tour Eiffel or the Bay Bridge is San Francisco was a hell of a job!

You ask which other metal can be used to replace Calcium. In principle, any other element in the group 2 of periodic table, which contains

However calcium is the fifth most abundant element in the Earth's crust, the other being

Keep in mind that calcium is also widely used in our body:

The $Ca^{2+}$ ion acts as an electrolyte and is vital to the health of the muscular, circulatory, and digestive systems; is indispensable to the building of bone; and supports synthesis and function of blood cells. For example, it regulates the contraction of muscles, nerve conduction, and the clotting of blood. As a result, intra- and extracellular calcium levels are tightly regulated by the body. Calcium can play this role because the $Ca^{2+}$ ion forms stable coordination complexes with many organic compounds, especially proteins; it also forms compounds with a wide range of solubilities, enabling the formation of the skeleton.

Therefore, your closest replacement might be magnesium, based on its electronic configuration and abundance in Earth crust. But keep in mind that if you replace calcium with magnesium you also need to redesign all the system using calcium in our bodies!

Behold: the skeleton of the glass sponge. 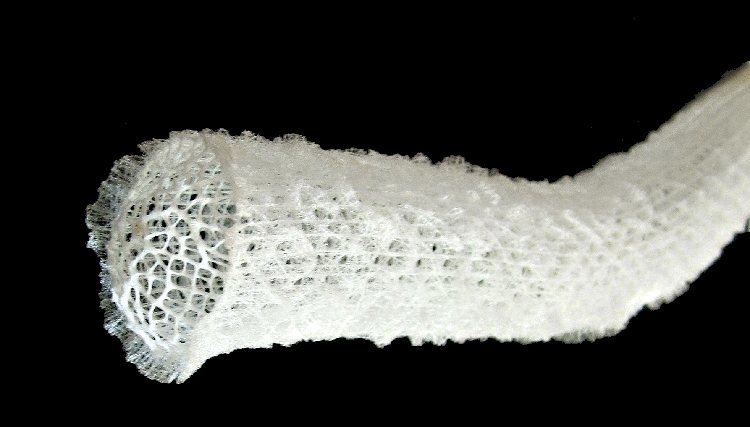 Glass sponges in the class Hexactinellida are animals commonly found in the deep ocean. Their tissues contain glass-like structural particles, called spicules, that are made of silica (hence their name). Some species of glass sponges produce extremely large spicules that fuse together in beautiful patterns to form a “glass house”—a complex skeleton that often remains intact even after the sponge itself dies.

Silica is widely available on earth and is used by some animals to build skeletons / shells in the way most animals use calcium. The glass sponges are one example; radiolarian protists are another. As with "woven bone" it is not the mineral itself but the structure in which is laid down that confers the strength.

The glass sponges must be able to repair their silica skeletons. These animals get big, and very old.

Found something that may work. Chitin, (C8H13O5N)n. If you can make an endoskeleton of it, its not based on Calcium.

Carbon can form diamonds, carbon nanotubes stronger than steel and graphene sheets flexible as plastic but tougher than bulletproof glass.

A carbon based bone structure could use properties from all three forms to have bones that are virtually unbreakable.

Considered we are already a carbon based lifeform, carbon seems the obvious choice.

This isn't quite a direct answer as it's not replacing calcium in bones, but there are a few options for stronger biological materials.

Not the answer you're looking for? Browse other questions tagged biology aliens xenobiology bio-mechanics bones .

97
Is there a scientific explanation as to why aliens should look similar to us?
2
How similar should we expect alien molecular biology to be to that on Earth?
23
Metal that glows when near pieces of itself
11
What metals other than calcium can be used to create alien bones that won't also engender a human-toxic environment?
2
Is there an element or compound that is highly reactive to any component of milk?
7
What Changes Are Needed To Make A Land Vertebrate More Than 100 Tons?
2
What kinds of diet/intake changes would be possible for a race with extensive DNA modification abilities?