Could a medium sized mammal in the order carnivora evolve to be bipedal?

In the movie Guardians of the Galaxy (and a few others), we meet a bipedal raccoon known as Rocket (who I am aware did not evolve to be bipedal, but I am using him as an example). I honestly love the idea of an animal the size of a cat/raccoon/coyote evolving to something similar to a human.

This is probably the result of my bias as a human towards things that look like me, but that doesn't mean such a creature wouldn't be a fun thing to include in a fantasy setting.

Yes. Some carnivorans are already facultative bipeds. Raccoons can squat on two legs to feed, and indeed one hypothesis on human evolution suggests bipedalism came from squat feeding. Meerkats often stand up to survey their surroundings. Bears will stand on their hind legs to free up their forepaws. Faith the dog was even fully bipedal.

By amplifying and sustaining the evolutionary pressures which drove those carnivores to be facultative bipeds, obligate bipedalism can be reached. Or you could just have them go along a parallel path to primates; start out with something like a genet, which would then develop brachiation and eventually descend to the ground to walk upright.

Yes, and that is what has happened on earth. Mid sized mammals evolved into primates, then bipedal hominids. But what you're really asking is if a character like Rocket makes natural evolutionary sense.

Let's investigate the bodily differences between Rocket and humans.

Rocket has but humans don't have:

Rocket feels human because he has:

The problems in believing Rocket could evolve naturally arise in the development of the human characteristics while preserving the non-human parts.

The biggest issue is in believing bipedal creatures need a tail. A tail almost always serves as a physically needed counterweight for climbing or sprinting. Bipedal creatures don't have great need to climb, otherwise they would evolve more appropriate forms, like chimps. Bipedal forms use swinging arms for counterweight and it's extremely effective.

The next issue is high intelligence creatures with large and powerful canine teeth. Current theories contend that early hominids were able to develop larger brains (thus, more intelligence) because they first discovered fire and started cooking food. Cooking food releases many more nutrients than eating raw. It's also easier to chew. This allowed smaller teeth to develop that didn't need as much crush power. The muscles that have that crush power, which wrap all the way around the top of the head, decreased in size while the skull expanded. The lesson biologists take today is that human level intelligence could not have happened without fire cooked food (an utter game changer in many other ways too) and the teeth getting smaller and the jaw weaker.

The remaining traits are believable enough. Apes have articulate hands that are only a little less nimble than human hands. Raccoons even have decent dexterity already. A small stature is known in Homo floresiensis, who was bipedal but probably slow and clumsy. Emotive personality is subjective humanity. Plenty of people are very boring, but we don't write stories about them. Finally, the fur can easily be explained by sexual selection. That's right, the ladies love a hairy guy.

For me, I can forgive a species that looks like Rocket because it's very fun, but I know it's unlikely in the natural world.

It's worth recalling that bipedalism is great for covering distances. So if your creature historically needed to do that in order to get a bite to eat then it would make sense.

Imagine kangaroos with pointy teeth and claws. I would get out of their way.

here is a good article on the subject

A brief synopsis, to become bipedal, the species must undergo some environmental pressures to make it advantageous than remaining quadrupedal.

A couple of theorize is, one from Darwin with the use of tools (rocks and sticks) made it advantageous to become bipedal and the carrying of food (which chimpanzees do now and raccoons sort of does). In my opinion the two theories are the same, the carrying of stuff is easier with your hands free.

With another theory of climate change wiping out the forests, if your "raccoon" or "red panda" was a forest dweller originally, to cope with the new grasslands, bipedal locomotion may be more energy efficient. I would suggest being a predatory creature, one that cannot sustain itself on the vegetation of a savanna and need to conserve energy for long treks. This would assume the creature dispatched itself from its preferred environment and become nomadic.

Edit: I should add, one draw back in becoming bipedal was the change in shape of the pelvis. This caused issues with child birth, which became compounded in the evolution of a bigger head, thus hominid babies were born a lot less capable than its ancestors were and how many predator/prey are. Its assumed, for a baby to be born with the same capabilities as our nearest cousin, it would have to gestate for 2.5 years, but would kill the mother upon birth. This would require a strong social community to care for the fragile young. This social structure exists in primates and somewhat in raccoons, thus I am liking the idea of an evolved intelligent raccoon species.

Yes, it could. As for "how" that depends on a multitude of factors, but an arboreal lifestyle transitioning into a plane dweller might do the trick, just like it did for us. As a bonus for you I do think that some kind of bear or mustelid might be the most likely candidate given the appropriate circumstances, as those are animals that already show an upright posture and limited bipedal movement on occasion.

Yes, it could. In general, any animal could evolve to be bipedal given enough time and an incentive to do so. Some possible incentives could be the ability to keep hands free to carry or manipulate objects, to travel long distances, or to extend the creatures reach. As for how long it would take to evolve, traits tend to either spread quickly or die out soon after the change emerges. In order for the trait to stabilize I imagine a few thousand years should do the trick. However, that is just for rudimentary walking. For a bone and muscle structure that could support continuous bipedal movement, independent from any other form of locomotion, I think one million years would be a safe bet.

Yes, yes, cats on 2 legs. How droll. But giving up 4-legged locomotion is a big ask for Carnivora. They cook right along on all 4, all of them. Well, almost all of them. 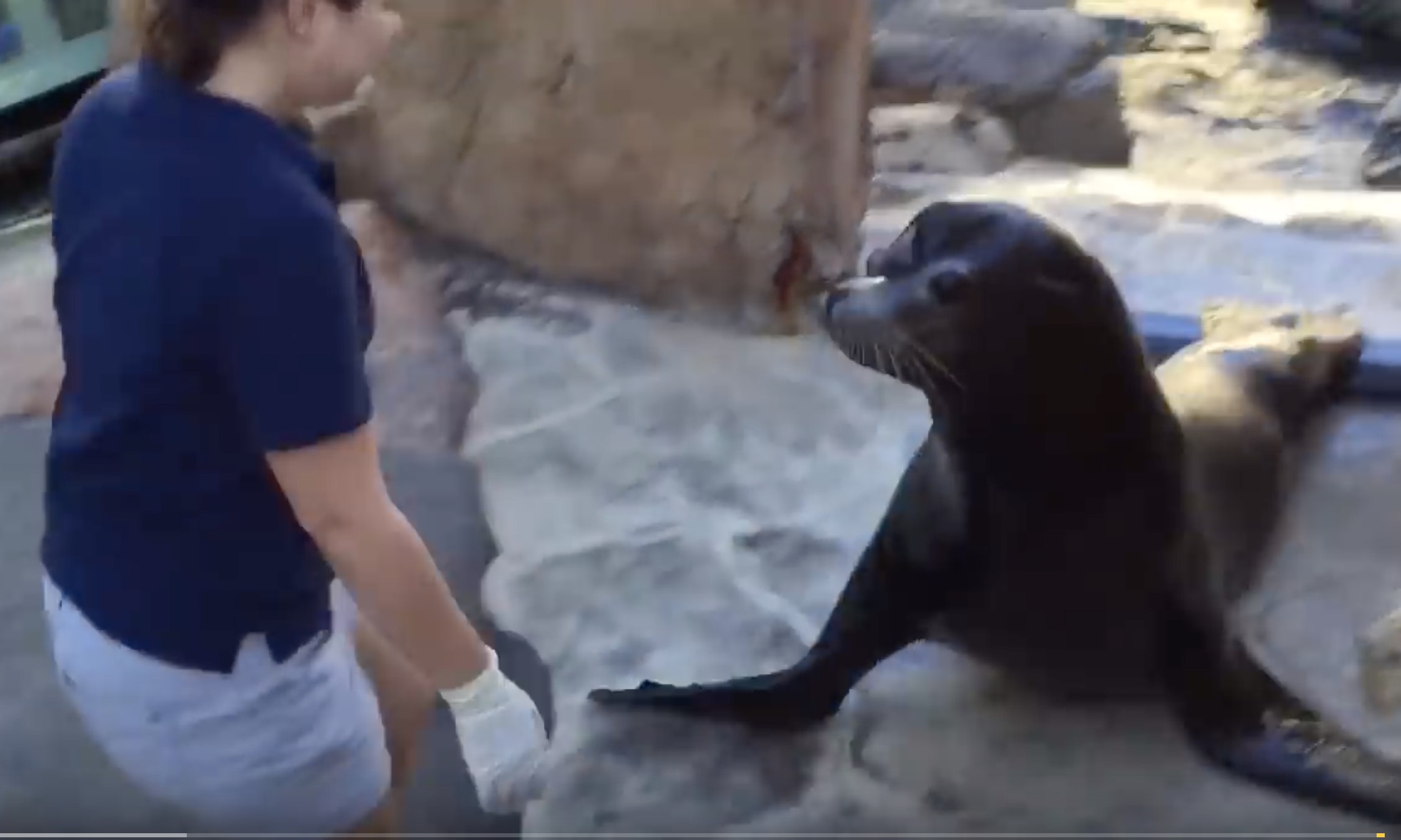 Consider birds. They are bipedal because they needed their forelimbs for something else. Primates too - climbing. The seals have specialized their limbs for swimming, with the result that on land, sea lions are already bipedal - they walk along on their forelimbs. Their hindquarters pretty much drag along.

The sea lions that return to the land and become bipedal, would have increasingly vestigial hindlimbs. The entire rear part of the body would turn into a dragging "tail" like a Tyrannosaurus or a kangaroo - this would serve to counterbalance the front-heavy head and upright body.

Many other answers already state that racoons could become bipedal, but I think the most important part of this question is actually if they can become sentient Rocket-like bipeds.

First thing to ask is if a Racoon could be naturally put under the right kind of evolutionary pressure to require intelligence. Racoons are very similar in a lot of ways to our pre-human ancestors. Their omnivorous status means they need to know a maximum number of techniques for acquiring food. Their need to avoid poisonous plants requires good recognition and discrimination skills, their need to hunt means they need to be able to plan and anticipate. Their hands are dexterous enough that they could be capable tool users if they had the minds to match. They are already somewhat social; so, they could probably overcome the gestational issues with bipedalism as we did; so, all the major positive contributions to human intellect are already there.

So, what's holding them back?

Many might assume that it is their small size that would inhibit their intelligence because they could not support a human size brain, but history and biology tells a different story. Brain size is actually a small factor in intelligence, because biology is so good at optimizing when it needs to. For example, Homo Floresiensis was a 3-foot tall hominid which is believed to be capable of even more intelligence than modern man based on how developed the cognitive structures in their smaller brains were compared to ours. While a raccoons frame could not support a homo-sapien brain, something more like a Homo Floresiensis brain would work fine.

The real culprit as to why racoons are not already as smart as modern man is more of an environmental issue. Racoons can use the skills they already have to survive quite well. Any step forward their minds make in evolution can just be undone by a step backwards if there is no strong environmental force making sure that the dumber members of their population die out. The real trick to human intelligence is not nutritional, size, or any of that. It is that we got are arses handed to us over and over again nearly forcing us out of existence. We were basically stuck in an situation where a little more strength or a little more speed could not save us, but a little more smarts could. And generation after generation, the dumb died young or failed to sustain their offspring where the smart could succeed by planning out new ways of obtaining and protecting our resources.

This actually leads to a very interesting conclusion: As humans change the world, raccoons who are smart enough to study human behaviors and make accurate predictions about us are less likely to get hit by a car, or caught in a trap or shot digging in our garbage. Those that learn better ways to communicate can tell eachother which humans are safe, and which are dangerous. This means that racoon populations may in-fact be under the exact right conditions right now to evolve into what you are asking about. The question remaining is if this status quo can be maintained long enough for evolution to take its course, and if humanity would tolerate another intelligent species in our midst if they make it that far.

Not the answer you're looking for? Browse other questions tagged biology bio-mechanics mammals skeletons bones or ask your own question.

19
How would a massive space creature evolve?
5
Viability of a hybrid endo-/exo- skeletal intelligent (space-age) race
4
Mind-reading technology
1
Could Whales Elsewhere be Afrotheres?
8
Are my wing-walking griffins viable?
6
Alternate paths to orthostasis
11
If quadruped mammals evolve to become bipedal will their breast or nipple change position?
6
Anatomically Correct Propellers
4
Could bipedal humanoids evolve from bears?