Any examples of headwear for races with animal ears?

So, considering the structure of the head and ears for creatures like cats, dogs, and bears, if one were to make a race with those types of ears (The stereotype cat person, essentially) I am curious how headgear might function.

I know glasses might be a problem, and a full helm might cause issues too. I figure perhaps they could fold their ears back if they wanted to put an actual helmet on...

If the creature needs its ears to function well in battle, or for ritual or cosmetic show offs, you need holes. Helmets for military dogs have them: 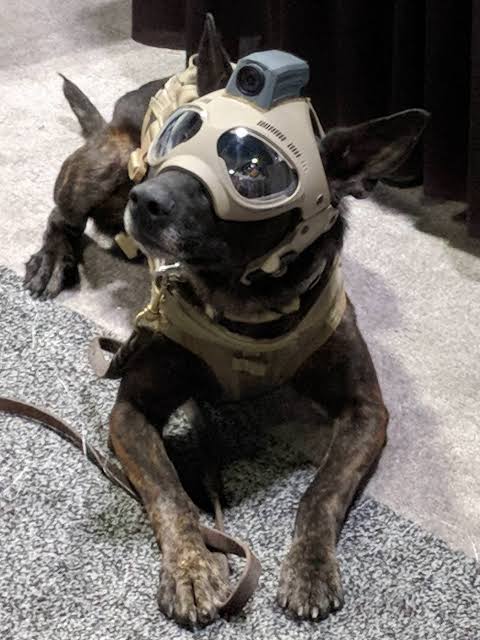 Otherwise, do fold their ears: 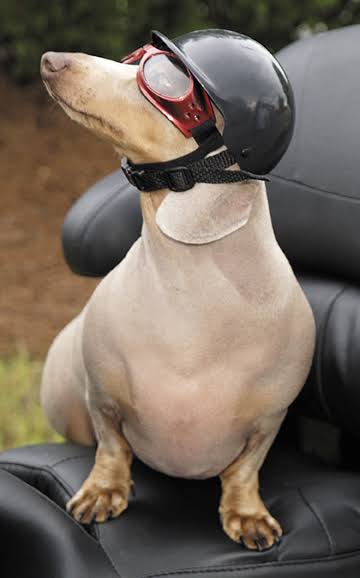 I endorse the answer given by @Renan but would like to add that if you need to actually cover the ears, that is possible, too, and without folding: 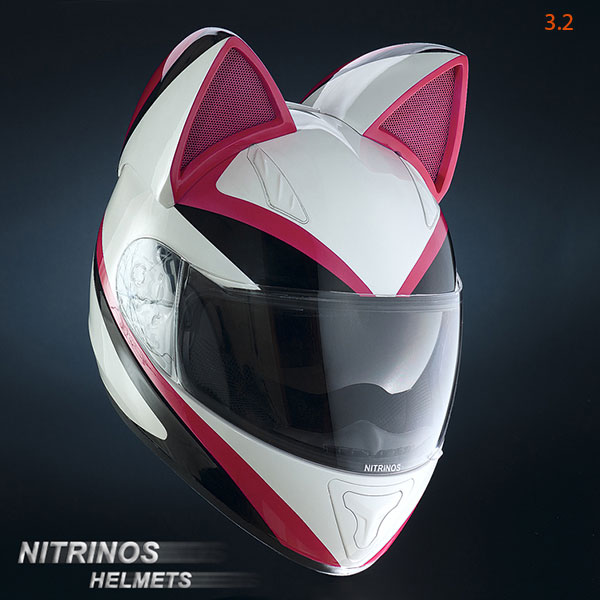 Not explicitly headware, but the attack dogs of the spanish conquistadores had full-on armor, with some pictures even showing headwear: 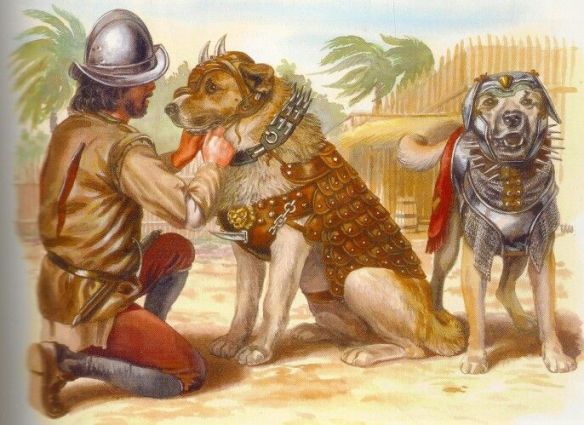 Apart from that it's just getting used to it. Human ears get irritaded by a ill-fitted helmet pretty quickly as well, we're just used to it / have designed pretty comfy helmets

All kinds of hoods would continue to work, I think. If the necessity of headwear is much bigger then felt discomfort (for example, cold weather clothing), heavy warm hats would be worn, even if they create some discomfort to the ears.

As for the helmets, there are three separate solutions I can see.

For the very light helmets, it could be just a comparatively narrow metal plate that goes from forehead to the back of the head, leaving the sides of the head and ears open. Modern military helmets that are adapted to big headphones give a similar profile: https://images.app.goo.gl/ZKBdTbA4mUdsfwKt8

For inspiration, you can also take a look at medieval horse armor. House marks often were formed to protect the ears. https://images.app.goo.gl/dh5bW8Fac1Qgx9t89

Some medieval helmets were quite roomy inside, and heavily padded. So changing the form of the padding, you would be able to fit the ears inside without much discomfort. https://pin.it/t544kh6saed5fq

There are real human helmets designed to leave the ears exposed. Roman helmets in particular often left the ears completely exposed and were designed with reinforcements to compensate. The Roman imperial gallic helmet offered great coverage while leaving the ears open. Such a design could easily be designed with different ear shapes and locations.

Note the extensions and reinforcements needed to protect the ears. The more your ears stick out the more vulnerable to glancing blows they will be, guards will be added much like nose guards to catch or deflect blades. Just like real helmets you will see an evolution of design and many solutions to the same problem, the smiths imagination is the only limit, there will be no one single design. 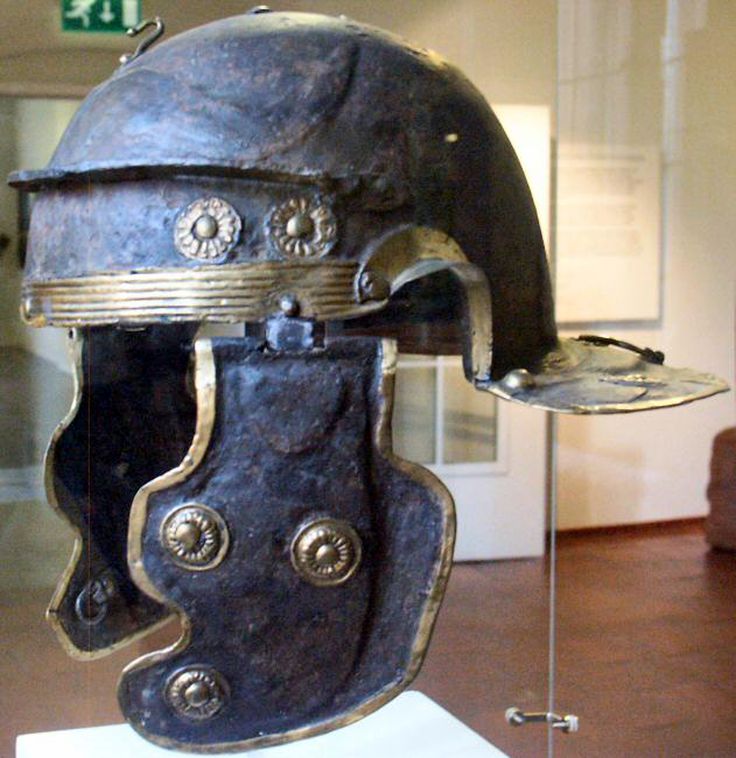 This could evolve all the way into something like this Japanese helmet or maybe you will have real horned helmets, really it depends on the size and location of the ears. 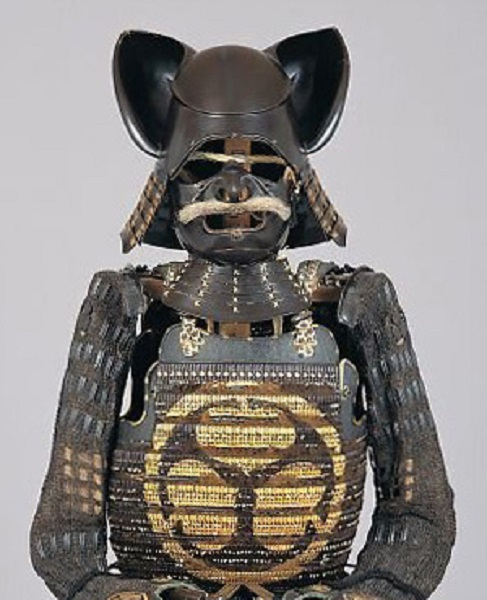 It is not as if they couldn't add metal ear flaps to helms. Some dog armor and especially horse armor had ear protectors. Note how they are connected at the front so the ears still have the full range of movement, yet is protected from melee. Horse helms are called Shaffron if you want to look up more examples, horses were expensive enough animals that decent armor was fairly common, so a wide variety of styles exist. 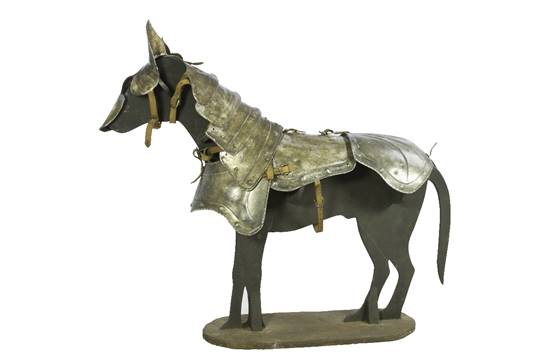 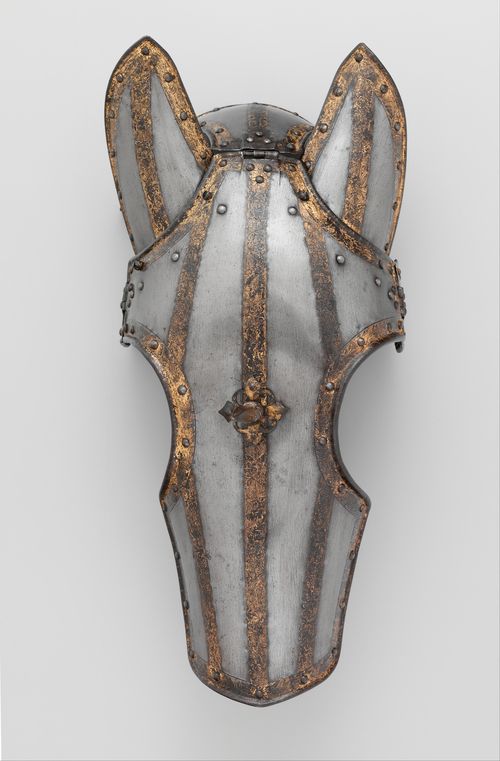 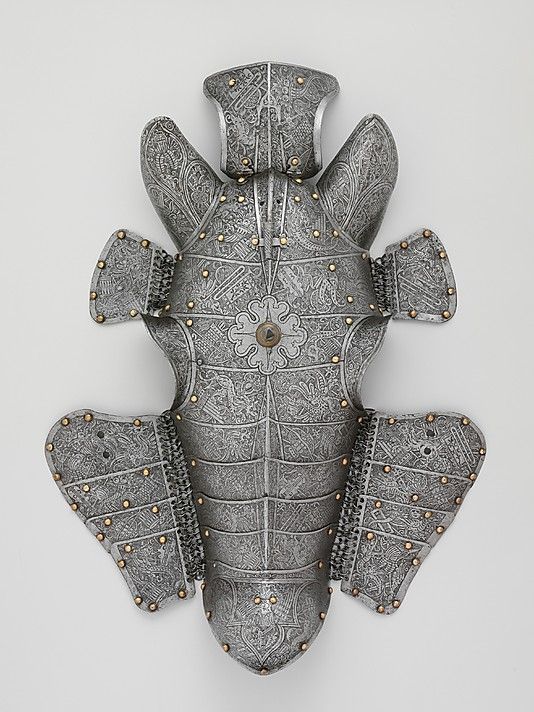 Well, starting with the easy stuff:

That leaves a handful of specific cases to take care of:

There's one other issue here though, standardization. Humans are kind of lucky in this respect, we can just cut the part of the helmet for the ears a bit high and make the helmet a bit on the big side, and it will fit most everyone without any significant issue. That won't realistically be possible if you have a mix of races trying to work together, or one race with a lot of variance (say for example a cat race that includes most of the existing domestic breeds plus most wild cats), because you'll have to leave pretty huge holes in the top of the helmet for the ears so that everyone will fit it properly. Given this, I see some kind of modular approach potentially being popular. Essentially, you have the outer helmet that provides most of the protection shaped to accommodate everyone, and then inserts that can clip into the ear holes to provide appropriate spacing so that none of the scalp is exposed together with appropriate guards to protect against foes attacking the ears.

Whilst other answers demonstrate how headwear could be adapted to accommodate the ears of these creatures, i would like to point out that, in our own history, there was headwear that ignored our ears. 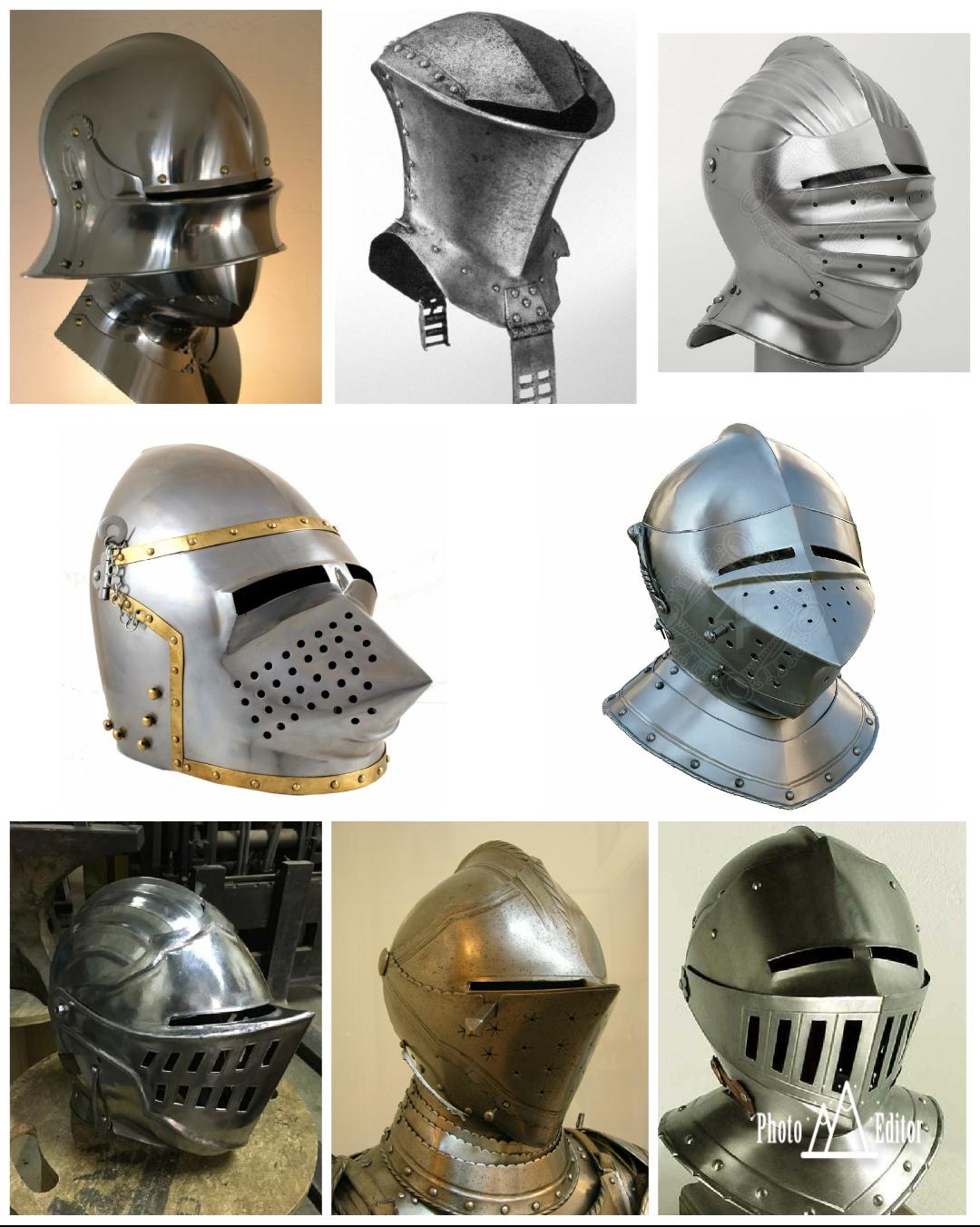 You may notice the distinct lack of openings for ears in these helmets, there are not even holes in the sides to allow some small level of hearing. I would argue that accounting for the ears in helmets may be unnecessary, at least in some instances.

I would imagine that a more pressing concern would be the faces of these creatures rather than their ears. You may see helmets with more elongated faces, such as the hounskull or armets which push out further, both helmets are pictured above.

If you wanted the ears to be exposed however, i would have to agree that something based on the shaffron could be a good option. 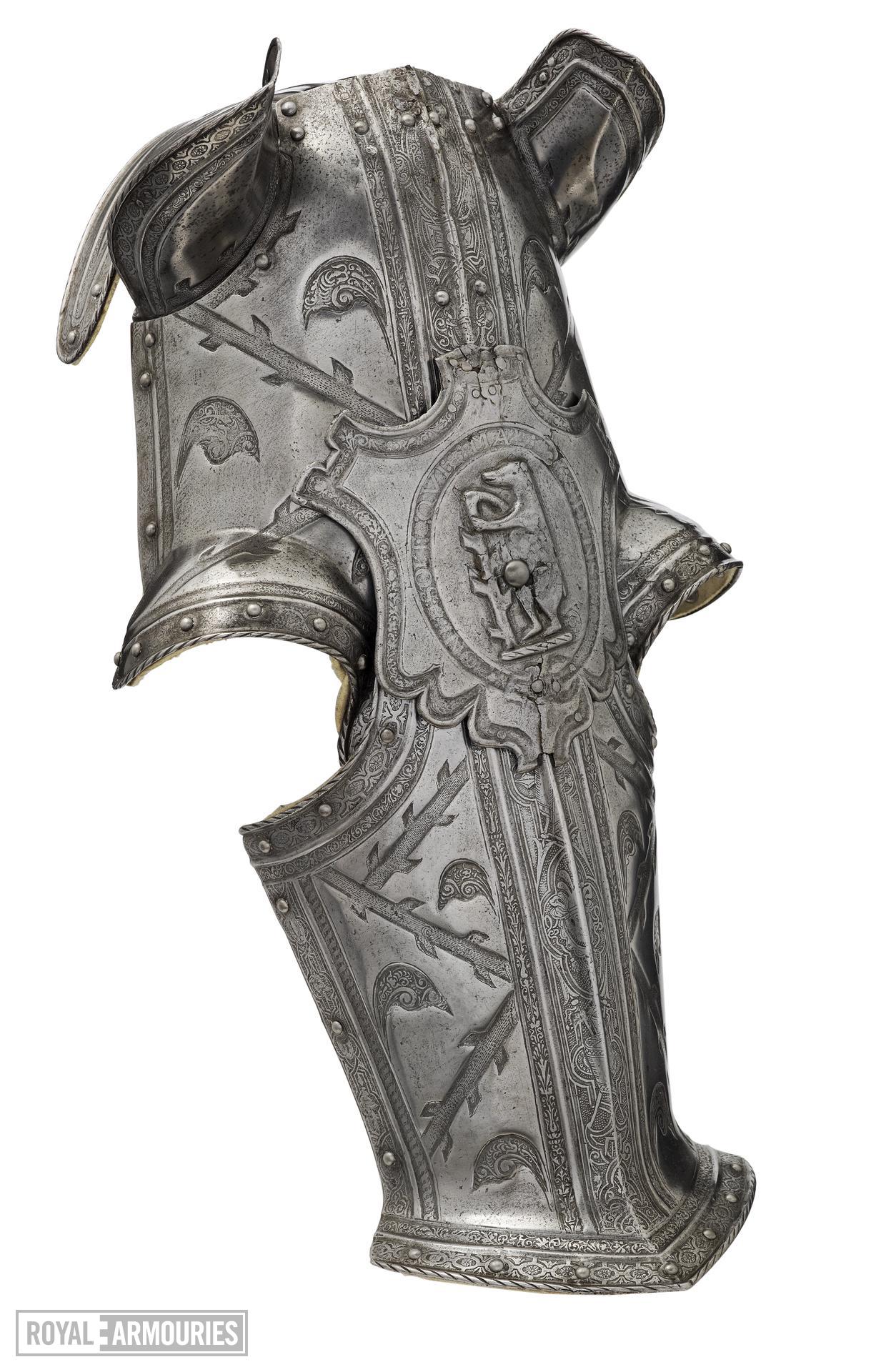 I would like to add that, if you were intending this to be a main form of defence, you would want a decent amount of padding to protect the face. You would also want some way of protecting your neck, in which case gambeson, possibly with chainmail as well, could work well enough.

You would may instead want a bevor, this is the lower half of the helmet pictured in the top left corner. The idea of the bevor is to protect the chin and neck whilst the salet, the top half, is the actual helmet and protects the head and face. One thing to note salets were sometimes worn without a bevor so, by that logic, these shaffrons may also sometimes be worn without the bevor.

For softer, non-combat headwear such as hats or hood, you could simply cut out holes or just wear a bigger hat. Also, whilst you may be right that traditional glasses wouldn't work as well, there are many alternatives.

For example, rather than fixed arms, you may opt for a chain attached to both sides of the lenses. The chain would loop over the ears and the lens part would rest on the face. This makes wearing glasses for creatures with non-human ears far easier. You may instead use prescription goggles typically used by sportsmen when traditional glasses may fall off, a similar idea to using the chain but does not require any ears. Another alternative is to use a method similar to that of a monocle where the muscles of the wearer’s eyes press down on a metal piece, keeping them in place. 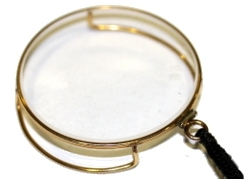 Not the answer you're looking for? Browse other questions tagged medieval fantasy-races armors clothing .

43
Medieval politics with fantasy races
13
Medieval politics with fantasy races - Round 2
7
Vocal hardware required for a single creature to communicate with any land animal?
4
Good approximative function to extrapolate weight of scaled clothing
5
How to make shaped armor out of bone and resin? Any examples beyond The Elder Scrolls?
7
Martial arts for small races(goblins, hobbits, etc)
4
Rail Transportation with Races Described Below - Specifically, Seating
1
Fantasy Zootopia - Races with both WIngs and Tails
4
21st Century Intracity Train Design with These Races