Multiple fireplaces in an apartment building?

I was working on a short story set in winter--a good time to contrast the cold, deprived life of the main character, reflecting his mental state, and the warmth and joy of other characters.

There is an apartment situation (perhaps only a few dozen max people, more likely about 20-30,) I imagine in a small city (or on the outskirts of a larger one) and I imagine all characters having fireplaces of their own. My ideal setting is in the 20's-40's~50's, without going to the radiator or boiler route, is there any way each apartment could have its own fireplace, even if not bigger than a few feet?

I mean, theoretically, there could be complex series of pipes in the building, but that is more dangerous than anything and quite stupid.

Here's a stock photo of Edinburgh. As you can see, there are a lot of fireplaces. 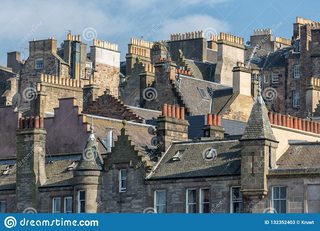 (From www.dreamstime.com's royalty-free section). I used this photo as it is royalty free, but most tenements are in straight rows, not as messy as this

A large part of the housing stock in Edinburgh is what we call tenements. A fairly typical tenement consists of a stair, with 3 flats off each stair, and 4 floors, so about 12 flats total. Each flat has 2 to 4 rooms of 8-15m2, and each of these rooms has a fireplace. There are also smaller box rooms or cupboards which do not have fireplaces, many have been converted to bathrooms. Every flat has at least one 1m2 cupboard which would have been used as a coal store. They vary from quite grand in some areas of town, to quite small and cramped in others.

So this "typical" tenement has 36 fireplaces, slightly more than one per person living there in modern times, though in the time frame you mention, there would likely have been more people in each one. They aren't exactly what you're looking for, but they sound pretty close. They are also very characteristic of Scottish cities, and I have not seen anything quite like them in the US where I assume your story is based. The Brownstones in Boston look similar, but lack the forest of chimneys and also presumably the fireplaces.

These tenements were mostly built between about 1700 and 1850. By 1920-1940, they were often a bit dilapidated, and potentially the cheaper end of the market (many are now very expensive). It would be quite believable to find tenements still using coal in that period, with gas fired heating taking off after the war.

My solution would be to go with a conversion of what the Americans refer to as a "colonial" due to when they were built in the US. Use a building much older than the setting that was converted from a large single dwelling to apartment living but due to its age they kept the fireplaces rather convert to the latest and greatest of the date of conversion. Such buildings are quite common in most of the western world; big old grand homes, from an era where fireplaces were put into almost every room, that were later sold when the families that built them fell on hard times and sub divided into flats/apartments by developers. In my local area many such buildings are actually elder care facilities.

You can definitely have a fireplace for each room. That is how they did it.

A college dormitory is like an apartment house. Older dorms often had a fireplace for each room. Here is a dorm at Yale. Judging by the laptop this is recent. 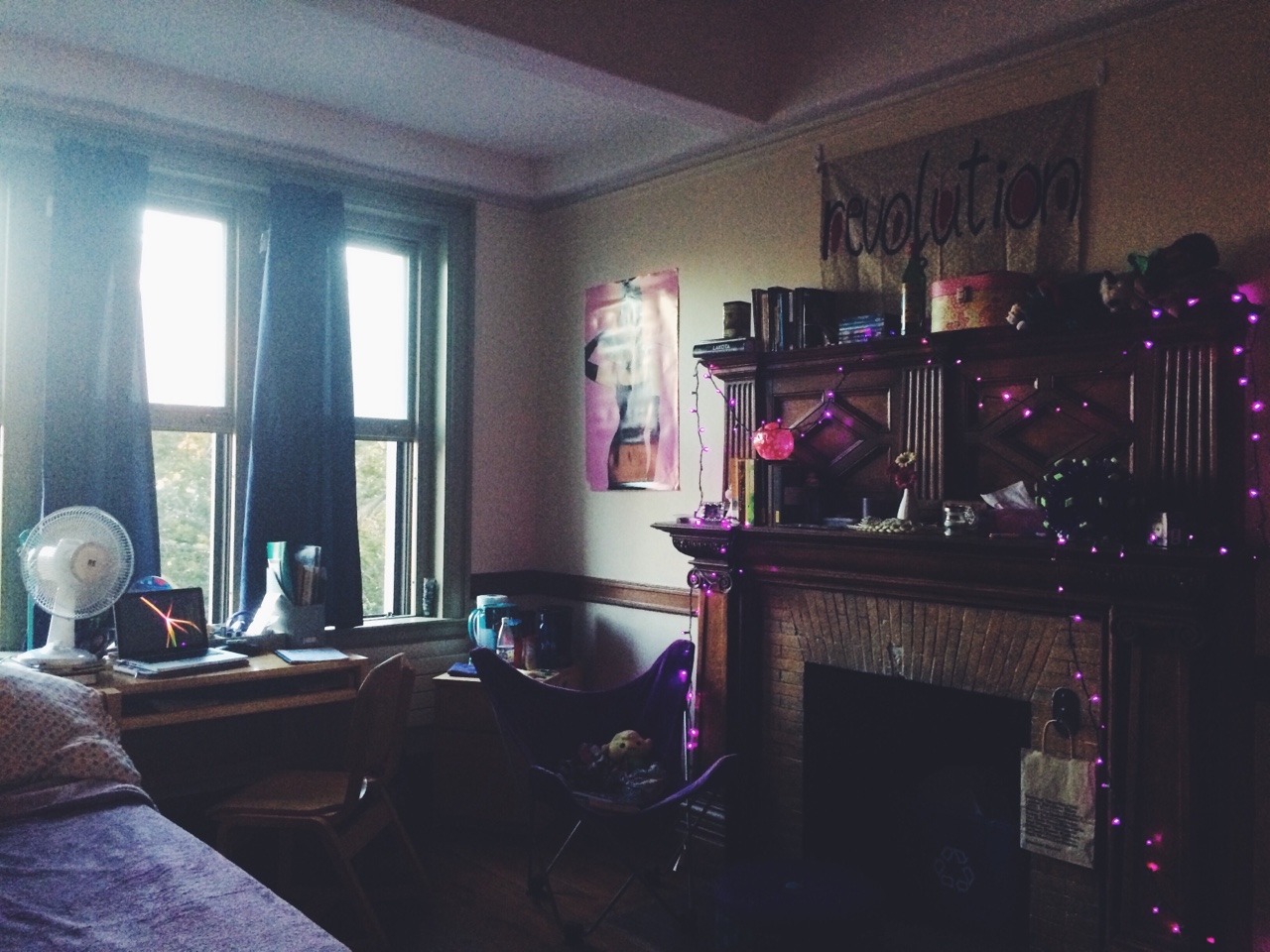 In this photo of Burton Hall at Carleton, you can see the chimneys - there are many.

Each of those chimneys has 6 stacks in it, and each stack is shared by several floors of rooms. Of course at Carleton they bricked up the fireplaces long ago because of the propensity of Carls to conduct flammability tests of items they found. But the principle is what I am after.

You can have your characters reside in a dorm, or a converted dorm. Or apartments built in that period. Take a look at old photos or new photos of old apartments and you will see that they, like Burton Hall, have many, many chimneys.

The Franklin stove is a metal-lined fireplace named after Benjamin Franklin, who invented it in 1741.1 It had a hollow baffle near the rear (to transfer more heat from the fire to a room's air) and relied on an "inverted siphon" to draw the fire's hot fumes around the baffle.[2] It was intended to produce more heat and less smoke than an ordinary open fireplace, but it achieved few sales until it was improved by David Rittenhouse. It is also known as a "circulating stove" or the "Pennsylvania fireplace". (Quote and image courtesy Wikipedia)

The fireplace design is also more efficient, requiring less wood to heat the same space as its predecessors. 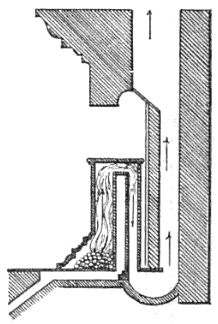 While having a single chimney per fireplace will always be easier on the fireplace, one of the benefits of Franklin's stove is that multiple stoves can use the same chimney.

The traditional problem of sharing a chimney is that an upper-floor user would create hot air, below which in the chimney was cold air. That cold air would remain trapped until heated equal or greater than the air above it. (This "inversion" is notable climatically for its pollution-causing capabilities.) The consequence would be the lower rooms would fill with smoke until the chimney air heated.

The Franklin Stove's "inverted siphon" ameliorates this problem by allowing a small draft to form first, heating and pushing out of the way colder chimney air.

Here's a link I found that you might find very informative.

The TLDR is that you absolutely could have a separate heating unit (of whatever kind) in each apartment, likely with multiple heating fixtures feeding into a single chimney. It'd just have to be an older building. How old depends on the needs of your story.

Fireplaces were already going out of fashion by the beginning of the 19th century just because coal-burning stoves did a much better job of heating a room and coal was more readily available in urban environments.

If it's important for your story that they be actual fireplaces as opposed to stoves, then Ash has the right answer. You'd want an 18th century building. If it's not, then it could just as easily be a 19th century building with coal stoves.

By the late 19th century new construction was shifting to steam radiators just because they were more efficient and (especially for taller buildings) saved you the trouble of having to haul coal up and down stairs since all the coal could stay in the basement with the boiler, and pumps would just move the hot water throughout the building to keep things warm.

As long as you're willing to invest in the infrastucture up front (at the time of building) this is no problem at all - but it is expensive.

Consider a square building with 12 apartments. It would have 4 chimney stacks, each containing at least 3 flues. In the simplest version, each apartment would have a single fireplace. Each chimney stack would be pretty massive, which is why it would be expensive, and the upper stories will benefit from the presence of the heated flue(s) from the lower stories.

Many New England colonial-era houses have a single, central, chimney stack with 4 fireplaces per floor. Since the masonry is enclosed by the building, maximum efficiency is obtained.

For the time period you're indicating (1920s to 1950s), there was a vast array of heating options available. Complex systems of pipes is exactly what they'd have! Most apartment blocks of that period (in the US, at least) had boiler rooms feeding steam radiators in all the main rooms of the building. Some very ritzy apartments may have had hypocaust heat (same principle, but you put the heating elements in the floor).

Coal stoves, oil stoves, wood stoves, electric heaters of various kinds, baseboard heat (using a number of fuels) are all much more likely for the time period. However, multiple fire places are certainly possible and old houses in general often had quite a few. (A nice view inside a Georgian era town house.

Not only is it possible, it happens in real life. Up until about 10 years ago, I lived in a complex built in 1986 (so a recent build, designed to be used this way, not a colonial-era home that was later split up into multiple apartments) with 8 apartments per building (stacked on top of each other, 4 to a side, not a row house) and individual fireplaces and gas heaters in each apartment.

This will be anecdotal answer and you'll have to decide yourself if it fits your needs. Based on the sentence

I assume you're more focused on having separate heating sources and not a modern-style central heating and for some reason you want it being coal/wood fueled but you don't necessarily need an open fireplace.

My grandparents lived in a multi-apartment 5-storey residential building in Lodz, central Poland. Their flat (originally) consisted of 4 rooms, a kitchen with a room for service a toilet and a bathroom. The original heating system consisted of 3 masonry stoves located strategically in the flat and a coal oven in the kitchen. One of the stoves was located in a corner of rooms so that it could heat two larger rooms and corridors, the other two rooms had smaller stoves each, dedicated for those rooms only.

I know that all apartments within the building, at least on the front side had similar setup. There were two main staircases, each with two apartments on every floor so you have a building with at least 20 apartments, each with its own stove based heating (totaling up to 30 stoves in the whole building).

These buildings were built somewhere in either late XVIII or (mostly) whole XIX century and were still heated with coal or wood at least until the WWII and probably even after it. And there were lots of such buildings in the whole city centre.

Additionally I know that at least some of the buildings located by the main street had also fireplaces in the living rooms so you may use that as well, however it will be limited to some rooms only and only in the most prestigious parts of the city.

Medieval castles hosted more than 20 persons, and they had nothing more than fireplaces to keep them warm: at least kitchen, bedrooms and living rooms had fireplaces.

The complex part is getting a good amount of combustible (wood or coal) to supply them, but for the rest it's not that insurmountable challenge.

6
How would a building handle being submerged?
9
Building materials on Europa
30
In modern world, what is the largest building that could be built overnight?
3
Diamond as a building material
8
Building an Anti-Supervillain task force
6
Building a launch loop
7
What would a cyberpunk apartment building be built out of?
17
Passive Cooling Techniques for Apartment Buildings
11
Would a superhero that weighs 750kg have to be overly careful running around on wooden apartment flooring?