Could moose/elk survive in the Amazon forest?

They would have been transported by ship there, but would they be able to survive? If not, is there an adaptation I need to make to the moose/elk? Maybe an artificially select species?

No, but plenty of their relatives can

A moose or elk would die in the high heat and with limited resistance to insects and such. They simply aren't designed for the rainforest. However, there are plenty of animals large enough to mount that are native to a rainforest, and a rainforest alone.

These animals are not domesticated, so there is one difficulty. In addition, there are several animals that don't live strictly in rainforests, but are domesticated:

Finally, since you mention the Amazon specifically, there are more appropriate animals that are large enough to mount that you could assume were domesticated there. The list of potential mounts gets much larger if you include recently extinct megafauna of South America:

For the extinct species, it is worth pointing out that if they left fossils in the Amazon, there is basically no way the bones would have survived to the present day; the rainforest being perhaps the worst possible environment for bone preservation.

The reason why you won't find any mountable animals in the amazon rain forest is because it's kinda like a more green, lush version of Australia, in the aspect that half of the biomass is out to kill you in horrible ways.

It is a [redacted] to go through the jungle, on foot or otherwise. And the river waters can be classified in three types:

Before western civilization started messing up the ecosystem, indigenous populations would make the water closer to their villages swimming safe by ingenuous application of poison vine essences, which paralyze the piranhas.

Back on land you have 20-cm wide tarantulas whose venom will give you a three-days long constant erection. That would be funny if it weren't for the risk of penile gangrene. Then there are vampire bats, which can carry rabies.

We also have jaguars. They hunt alligators underwater, and they mimic birds and monkeys to lure and eat them on tree canopies. There are reports of jaguars being able to mimic the cries of human babies. Jaguars are loathed by farmers because when they get out of the jungles and into farmlands, they sneak into fences by night to kill cattle.

The icing on the cake are the anacondas. They are sneaky as hell, swim faster than you, and unlike rap music anacondas they will want some even if you've got no buns. They are not picky and will eat cattle and humans. If you raise elks in the rain forest, they will become anaconda food faster than you can say "god [redacted]!".

When people do raise cattle in the north of Brazil, it's always one of these three situations:

In my story, there is a civilization living in the Amazon rainforest. They need some time of mount that is adapted to the forest.

There are Buffalos in the Amazon (in the Brazilian state of Pará) and they can be used to mount: 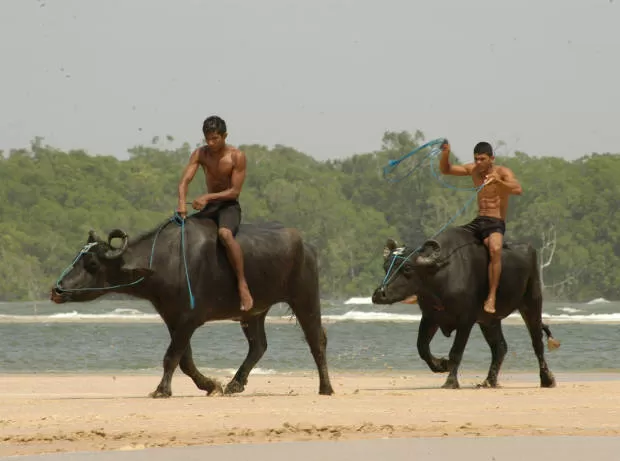 They live primarily near farmlands (in the Amazon region), but they have been adapted to live in the same climate as the forest.

[...] but would they be able to survive? If not, is there an adaptation I need to make to the moose/elk?

I don't know about a moose/elk, but a Buffalo would be able to survive, if it is domesticated. In addition, although not in the rainforest properly, but close, there is the Marsh deer.

They would have been transported by ship there [...] I don't think horses can survive by themselves in there

There are wild horses in the Amazon:

Forged under the hot climate of that region and struggling against all the threats that have come to them over the past two centuries, the Lavaliers are rustic animals that, according to Embrapa researchers, have developed unique characteristics worthy of study.

A striking feature of the planters is strength and speed . Yes, in addition to being very resilient, they are also excellent sprinters, they can maintain average speed of 60 kilometers per hour for 30 minutes.

The original horses came from Europe, but they have developed unique traits to be able to survive near the jungle.

Putting climate and disease environment aside, because kingledion covered them, there is the issue of antlers and rainforest growth. Rainforests don't have an open understory the way mature conifer or oak woodlands do, as such anything that grows a large rack of antlers is seriously maladapted to moving around and feeding in the environment. There is evidence of several moose/elk species dying out because when their environment became forested because of this very issue, most notably the Irish Elk.

Not the answer you're looking for? Browse other questions tagged environment fauna survival domestication mounts or ask your own question.

7
Which crops to save to best ensure survival?
15
Forest rebels and the animal brigade
4
The Tibetan Bristlecone
6
Could an entire civilization live in an upside down forest?
51
Where on Earth is it easiest to survive in the wilderness?
5
Could tigers, leopards, and jaguars coexist?
1
Can a species devoted to destroying other species survive and prosper?
1
What kind of building structures could a group of eleven people make whilst stranded on a tropical island?