What would happen to a planet without its core?

What would happen to an Earth-like planet if its core completely and instantly vanished? Would the planet begin to pull in on itself due to asymmetry and the empty space in the middle, or would it begin to fail due to another factor? Or would it remain (relatively) unscathed? If so, for how long?

Gravity takes care of this. As soon as you remove the core from the Earth, you have a large void in the middle of it, and a lot of gravity acting straight towards the centre of that void. The void may also be a vacuum - depending on whether you replace the core with air or not - which will accelerate the collapse.

It is worth noting that this is only possible because the mantle is liquid. If it were solid, the spherical shape would hold it together and the Earth would retain its shape.

As Spacemonkey has said, the resulting loss of mass of the Earth would disturb the Moon's orbit. I'll go into some basic orbital mechanics to show why and how.

The Moon has a stable orbit around Earth because as its velocity carries it forward, the gravity of the Earth pulls it sideways, resulting in a perpetual circle: 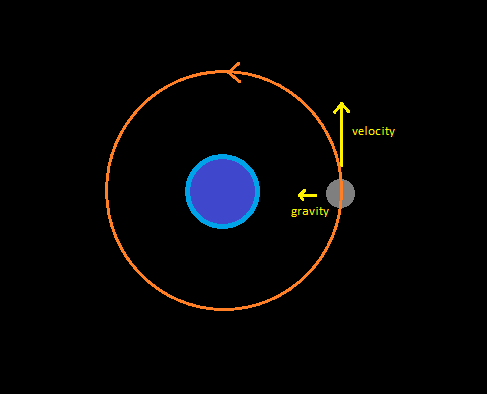 If the mass of the Earth decreases suddenly, so does the sideways force on the Moon, so it moves more straight - away from Earth. As it does this, the force decreases further, so it moves even further away, and so on: 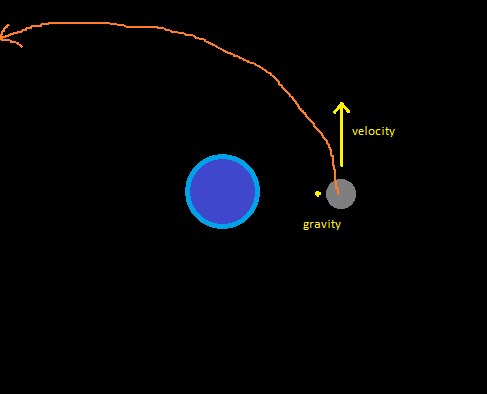 This is... bad. Not only has everyone already died because everything collapsed underneath them, but scientists predict bad things if we lose the moon.

In short: everyone dies.

The planet would implode.

You've instantly removed the core. So what's in its place? Hard vacuum. There is a relevant xkcd for a similar scenario.

Outside of the core-vacuum is a molten magma. The pressure exerted from the Earth on the other side of that magma is still present and the magma will be blown, violently, into the suddenly empty space. This rapid movement will ripple up to the surface of the Earth along the most fluid paths. This will take about five minutes. Basically, it would be like every volcano erupting, at once, in reverse. The entire surface of the Earth would likely experience double digit Richter scale values. The magma rushing into the vacuum would slam into magma coming the other direction at very high velocity and, five minutes later, the shockwave would make all the volcanoes and new fissures on Earth erupt at once, in the normal direction.

This would most certainly be an extinction level event. All life bigger than bacteria would die immediately, probably in the first ten minutes during the collapse. The rest of the life would die during the world wide eruptions and when the atmosphere escapes the Earth's corpse.

The moon would probably stick around for a little while.

20
How would the sudden destruction of Earth affect other planets within the Solar System?

13
What would happen at the core of a water world?
3
Planet loses its Core
3
If the world were blown to pieces, what would remain?
28
An Eden-like moon orbits a barren terrestrial planet. Why is the planet barren while its moon is earthlike?
10
What is the maximum orbital time for my moon around my planet?
5
How to find the density of a planet and its core taking into account the gravitational compression in them?
2
Is it possible to make a stable planetary system like this, and what would the orbits have to be?