What could prevent concentrated local exploration?

In my world there is a village with a hot spring, the only one on the entire island.

The spring has been hot since neolithic times, but thousands of years later the inhabiting nation becomes gripped with a frenzy of curiosity and exploration. They have all the means of current technology apart from non-intrusive imaging (such as sonar or X-ray).

What could prevent them from exploring the source of the spring, ideally without raising much attention?

Edit: The technology is of magical nature and should be nigh undetectable by default.

As you stated in your question, the cave which contains the technology has already caved in at least once in the past. The local populace may be fearful of the cave being unstable and, if they were to disturb it by delving inside, the cave could collapse and kill the explorers. This would discourage them from attempting to explore, the reward of knowing whats inside there is not worth the risk.

In a similar vein, the populace may be fearful of exploring the cave as they may be walking into an active volcano. Obviously we know that it is ancient technology that is heating up the water but they wouldn’t, likely assuming the heat to be caused by underground lava lakes or intense geothermal activity.

There may actually be lava lakes or spots geothermal activity down there that the ancient technology is utilising for power (maybe the hot springs are actually a way to vent off the heat produced to prevent damage to the machinery). If someone went into the cave and felt an extreme heat or saw a lake of lava, they may think twice about exploring it further.

You mentioned that the cave may instead be filled in. If it was filled in with water, that could massively deter people from exploring it. The reason being is that not only is it dark, it is extremely easy to get lost (as now you are moving in a 3D plane, rather than just along the cave floor), you have a limited supply of oxygen, plus you can only go down so deep before the pressure on your body from the water around you is too great.

Your ancient tech may be safe and sound in an air pocket further in but divers would never be able to reach it. They wouldn’t know the way there and, even if they did, the way there may be too dangerous and it prevents them from reaching it. Whilst a submarine might be able to do it, the caves are too small for one to fit in.

The hot spring may be a holy site, the cave being sacred. To enter the cave is to desecrate the holy site and is punishable by death. This would prevent people from attempting to explore the cave, perhaps out of respect for the religion or perhaps out of fear.

A modern day equivalent of this is a church in Aksum, Ethiopia claims to house the Ark of the Covenant. No one is allowed to visit the site, the monk who watches over the Ark must do so until he dies, he is not allowed to leave the chapel grounds. Your hot spring and the cave may have a similar religious significance, preventing people from exploring it.

Alternatively, rather than a religious group acting as a deterrent, it may be a security or military force, government, the people who live above the cave, environmental preservation groups, etc.

There are some heavier-than-air gasses which could cause the cave to be inhospitable. Carbon dioxide is one such gas, if the lower parts of the cave were filled with carbon dioxide (or worse, carbon monoxide) then people would start to choke and feel dizzy as they went further and further, eventually dying due to asphyxiation.

The phrase ‘canary in the coal mine’ comes from this problem. Canaries are small birds that were carried into mines by miners. The reason for this is because the small birds quickly panic if they breathe in toxic gasses. Also, as the birds have much smaller lungs than humans, it takes less toxic gas to kill them. If the canary died, the miners knew they needed to get out of the mine quickly before they did too.

User Liam Morris already gave a very comprehensive answer, yet there is one possibility that I would like to add.

There is no reason to investigate the spring

The hot spring just looks like a regular geothermal spring unless one is willing to put extraordinary effort into exploring it. Make the island have a volcanic past, like Island, Hawaii or the Galapagos Islands. The machines creating the heat are very deep down, maybe 5 km or so. A meters thick diamond skin should serve to protect the equipment at that depth and it and the rock provide radiation shielding, preventing anyone from catching the signatures of the presumably nuclear energy source. (I assume nuclear, because how else would one power such a thing? Could shield magic, too.)
The construct heats water which then travels through the rock layers, making it look like ordinary hot spring water.

After all, if there is nothing special about it there is no reason to investigate.

PS: This TED Talk about a boiling river in the Amazone might be related/interesting. https://www.youtube.com/watch?v=k4N2SxUZwiU

Any society that can create engineering that lasts thousands of years, is probably capable of covering up the the cave so it looks like (and in fact is) solid rock.

As far as the locals are concerned, this is one enormous rock with a hot spring bubbling up somewhere inside it and an outlet for the water.

The only way to see the source is to go in through the outlet. Aside from blowing up the cave (or drilling holes with an unknown outcome, something that would be very difficult in a large mountain), there's no other way to get inside.

Make sure there are multiple outlets, each one much too small for a diver. While they flow to the same pond or creek, they can not be enlarged/merged without seriously damaging the entire cave structure. 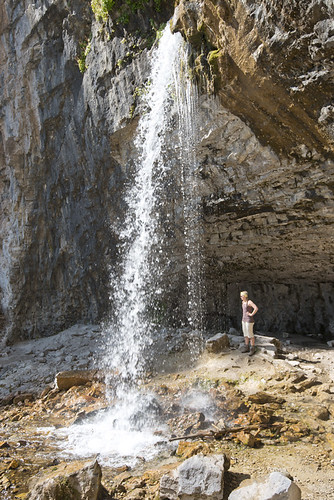 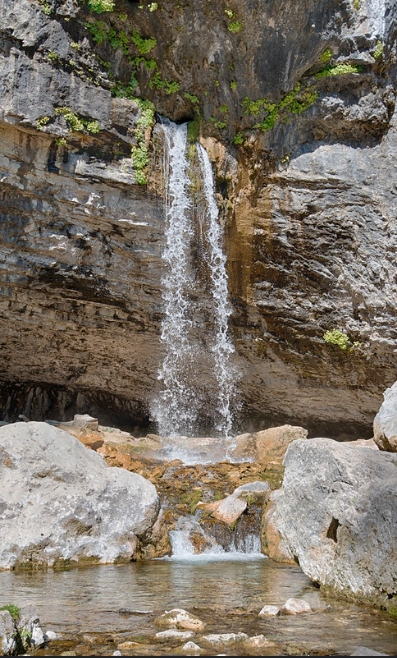 Our current technology includes swimming robot/drone cameras or cameras on the end of a flexible stick (like what are currently used for checking out house sewer drains). To preclude those being successful, make sure the water outlet path is quite convoluted with narrow jagged turns no GoPro can manage. An additional deterrent could be rock with metal throughout it that interferes with wireless communication. Any robots sent through would get lost or perhaps even fried.

The cave from which the spring emerges is home to a family of some very rare, nearly extinct albino reptiles, it is the last known colony. They need to live near hot springs because they need to warm up their blood but cannot withstand the sun. Due to the low amount of food in the cave, they are very aggressive and treat all visitors as a potential meal. They viciously attack all explorers.

The reptiles are too aggressive to approach or move past, killing/harming/moving them isn't an option (conservationist groups protect the animals) and anesthesia is therefore also out of the question.

Water quality concerns; any excavation based exploration will destroy the usability of the water coming from the spring. As it forms the headwaters of a river network of international significance even the slightest risk of serious pollution is enough to halt proceedings immediately. No-one wants to end up at loggerheads with the neighbours over water rights just to salve a little local curiousity.

Not the answer you're looking for? Browse other questions tagged geography security exploration behaviour or ask your own question.