How can a person become completely mute without external indications?

I have searched for a while now, but I cannot find a definite answer.

A character I am writing has been captured by the antagonist, operated on and released, now completely mute.

I've looked around for a bit to find a plausible way to explain him becoming completely mute, but cannot find one.

Simply removing his vocal cords would still allow for some noises.

Important: He has to look normal from the outside, so simply sewing his mouth shut or something similar is not an option.

How can I justify this?

Your character has had a laryngectomy. 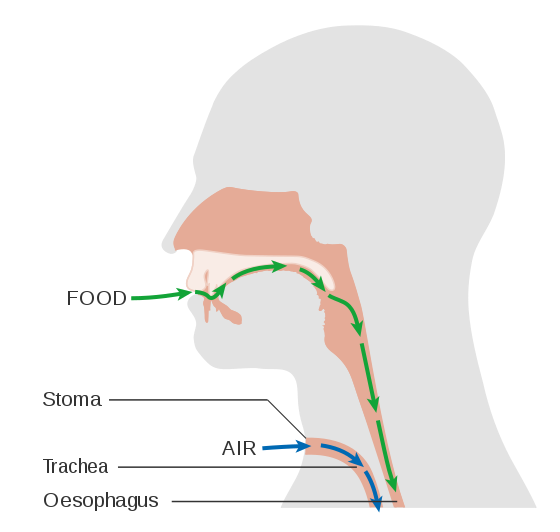 The removal of the larynx means that breathing happens through a hole in the throat (a stoma), and air no longer goes up to the nose and mouth. It is impossible for someone with a laryngectomy to choke on food. To make speech noises they need to learn esophageal speech, with gas routed up from the stomach (something like a controlled burp) or shape vibrations with the mouth using an artificial larynx.

Laryngectomy is a big deal. It was a revolution when it was developed about a century ago. It is not a prank or punishment sort of thing that mean jailers would do to torture - it is done to cure cancer and it requires considerable skill to do correctly. Maybe your character suffered a cancer of the larynx some time prior and required this surgery?

If you wish to leave the victim otherwise intact, destroy the speech centers in the brain.

If you damage the right areas, the victim will lose the very concept of words, so won't be able to comunicate through signs or text either.

Mutism is the inability to speak, not the inability to make any sounds with the mouth. Your character could become mute from a variety of causes. Willk suggests a laryngectomy, which would certainly work. With the right clothing, the person can look normal. Renan suggests causing aphasia with brain damage, which would also work, if done right (it could also cause damage that leads to changes that are noticeable).

Another possibility is a total glossectomy (removal of the tongue)

While some patients can speak afterwards, it's a long process that requires a lot of training and practice, and sometimes prosthetics. If your character's surgery was recent, speech wouldn't be there yet. While the woman in the article had a very invasive surgery, that was to get rid of cancer. A simple glossectomy would not be obvious from the outside, with his mouth shut.

Another (very common) cause of mutism is physiological, called selective mutism. It takes longer than an operation to invoke in people not predisposed to it. There's no real guarantee that's what you'll get, but it is a way to explain it, and there are no physical scars. (While most people with selective mutism can speak in some situations, some are completely silent 100% of the time for very long periods, even years.

dysphonia could also do this its basically your vocal cords don't work so great you have the inability or difficulty in getting air through your vocal folds one or both won't work. Just having one not working can cause slight to sever breathing issues so slight would be not really much but a sense the air isn't getting in no matter how much of it you breathe in. This can be due to stress. As someone who has that when its bad and not working I can be screaming and it comes across to someone else as a light barely there whisper. Other times I'm speaking and no one hears me at all I have to get right up to them and even then it can be impossible. I've had points where it didn't work at all and I was forced to just write. In moderate to loud places even just your home kitchen if its acting up you can't hear me over the noise.

But anxiety can also remove the voice for while not forever anxiety has so many body pains and things it does to you lots of people don't know about effecting how your voice preforms is one of those. I'd imagine he'd have some serious stress after being operated on against his will. Having it apart of the strain of the forced surgery and the drugs used could work for a time.

Inflamed ribs can do it too odd right? Well that works because the pain and inflammation of costochondritis also bleeds pain and tightness to the muscles, chest and neck area. Now make your character gain anxiety, costochondritis, and dysphonia all from severe stress and the surgery which costo can occur from due to the operation as well as for no reason at all given him a few days, months (or years) of bad pain from all of it and no voice he'll be writing on paper and feeling like shit and invisible in no time flat. I say this as someone who has the entire lot mentioned my costo was caused by mold in the work place.

If you are going to make your character mute or nearly just know this is highly impactful to ones life no one can hear you if you can speak, the voice comes out as just air or not at all, it hurts to try to hold a conversation if you can have some speaking time at all. your entire way of communication is set to writing. Imagine being in the midst of pleasant and fun conversation you want to add a point by the time you've put pen to paper the topic is gone you have to learn to sit and just listen not respond in most instances.

your friends try to include you but have to wait you boil an entire paragraph of words to two sentences to minimize the time the flow of the conversation is broken all because they have to wait on you. Convos involving you get shorter and shorter to make something short and legible you no longer have paragraphs and endless speech each word can take forever and musts be chosen deliberately on swiftest point and clarity rather then your normal speaking pace. Others wait with looks of impatience or annoyance and jokes may not be clear eventually you are just alienated from conversation all the time because its too much for them to wait upon and for you to highly filer what is inside your head bubbling to get out instead you must always choose speed and clarity to condense it all into just a few lines. This couples with depression and loss of control over your life in a lot of areas so maybe you want to show these things his recovery and coping to the new him would be difficult not to mention the violation of whatever that villain did to him on or off that table and the purpose behind it the what and whys would be long standing.

Not the answer you're looking for? Browse other questions tagged science-based reality-check biology communication .

28
Can singularity be achieved in a PC without any external information?
7
How magically increasing external muscle strength will influence common activities like running?
11
How can a warm-blooded creature with external gills avoid heat loss in the sea?
0
how can I ensure that the amount of jing that a person has at birth is completely random?