The creatures I am working with are primate-like, hexapodal aliens with a terrestrial/ arboreal lifestyle. On flat land they are able to walk bipedally, freeing up their top 4 arms for manipulating objects. In trees or tree-like structures, they tend to use 4 or all 6 limbs. (Although technically they could get around using only 3 since they have poseable feet)

Ground-based combat would be fairly similar to humans, but with this information in mind, What weapons/ methods would be most effective for arboreal combat? Assume that they have at least 1 or 2 hands available, and that this is excluding bows and other projectile weapons. To avoid falling to one's death, weapons that are likely to shift the user's center of mass around should be taken with caution. The technology level can be anything available before the invention of gunpowder.

Finally, the weapons in question don't necessarily have to be orthodox in regards to "regular" combat, any hand-held method of removing the enemy's life is allowed.

By far some of the simplest and easiest weapons to use and make, spears and clubs have been used as weapons since the dawn of Man, and for good reason. If your creatures have four arms, they can use all of them on a spear and deliver a very powerful strike. Or a spear can be used in just one hand if needed. The same goes for a club.

The spear would likely be your best choice, you can use it from a distance and all you need to do it thrust it towards someone. Spears would also be good against people who were in trees as well, they have a long reach so you can easily stab someone in the trees. Pikes may also be an option, they’re basically just longer spears, may be good for very high trees.

In reality, any melee weapon can be used effectively, you may need some way of keeping yourself attached to the tree, maybe via a harness or just using your other limbs. Here are some videos demonstrating how a four-armed creature may use melee weapons: 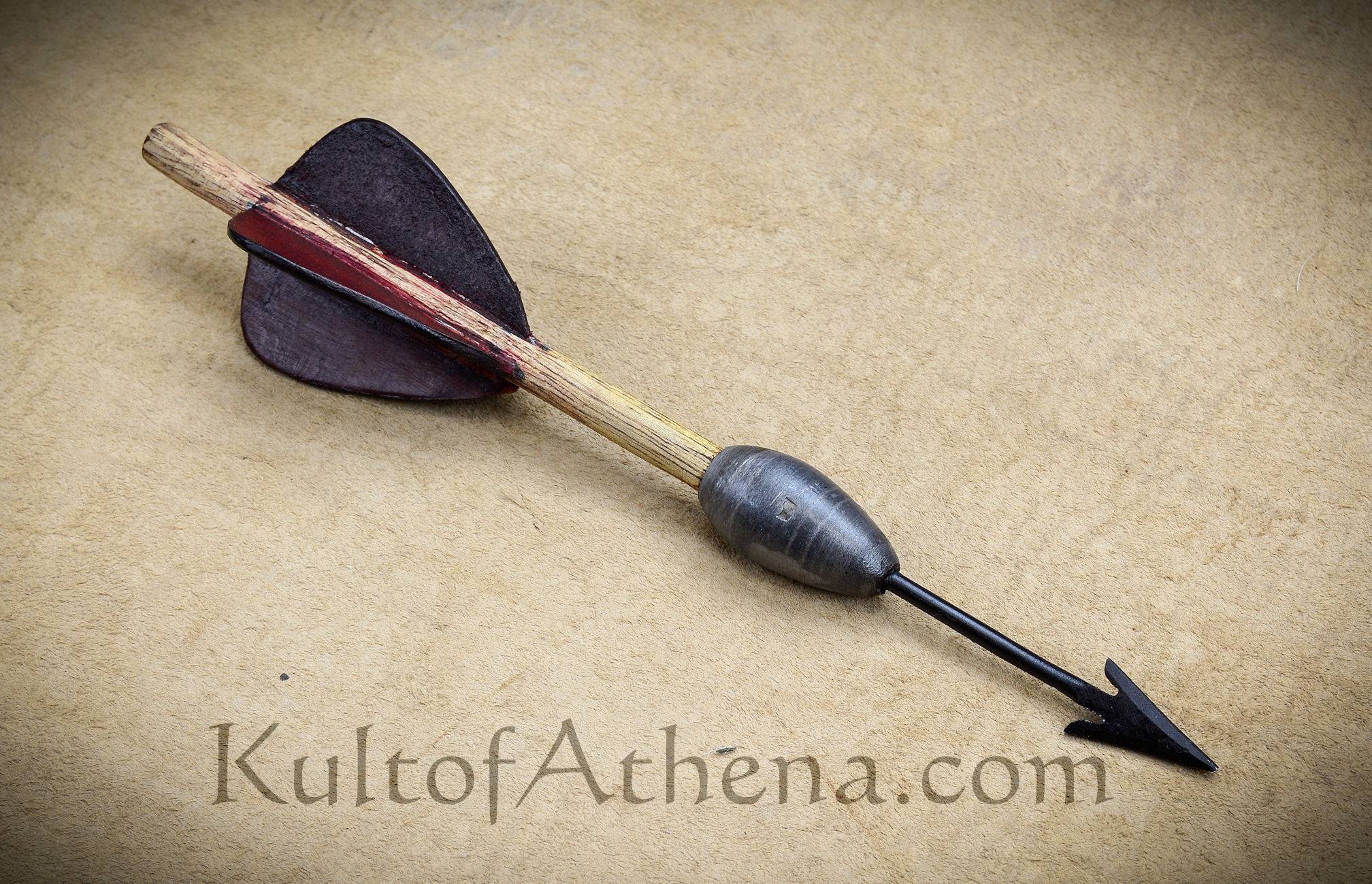 War darts, called plumbata by the Romans, were basically darts that were thrown at your enemy. They had a weight on them to give the dart a bit more stopping power. Your creatures could carry these, throwing them at targets if they are on the ground and dropping them on targets if the creatures are in the trees. Similar weapons were used by WW1 pilots, dropping darts onto planes below them. A more crude option is to just use rocks. 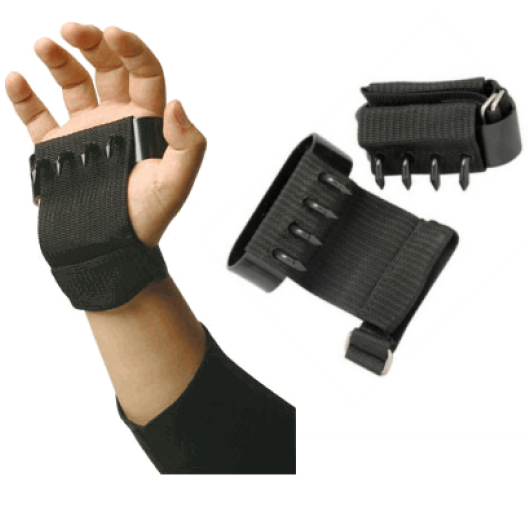 Meant as tools for climbing trees, these can also be used as effective weapons. They are often called tiger claws because of their shape and how, when you strike with them, its like you are clawing your target like you are a tiger. These would also fit well into the theme of these creatures climbing trees, you could say its very tree-matic.

An unconventional weapon to be sure, it is primarily a tool meant for climbing or attaching an anchor a far away point. However, being made of steel, if you got hit with one of these i don’t think you’d be walking away. You may also be able to drop it down, hook someone under the chin or arm and hoist them off the ground.

Again it fits very well into this idea of the creatures climbing trees, it would not be ideal for tree-to-tree combat though as it would likely get stuck on all the branches. Although, that could be useful for shaking branches to make them fall. You could also hook it behind a leg and pull them out of the tree.

Whilst not effective weapons per se, you could easily use them to kill someone. Simply saw or chop part of the way through some large branches, when your enemy steps on it the branch will break under their weight, causing them to fall to the ground and break their bone. Or you could cut part way into the whole tree and fell it when they are in its branches.

As stability and maneuverability are very important for fights in the canopy blade weapons are going to be chosen over blunt, top-heavy weapons (maces and axes) and long weapons (spears and polearms). One-handed blades (knives, short swords, arming swords, falchion, and sabers) seem better than two-handed ones (long or great swords) for this reason.

You excluded ranged weapons from this discussion, but I´m still going to mention them because I´m a completionist. Bows and crossbows could fit into two different functional groups. Crossbows and big, powerful bows (longbow) would serve as sniper weapons while rapidly firable, small bows (short bows) will be used by raiders. Think steppe-nomad tactics. Blowing darts might be interesting if strong poisons are commonly available. There is also a large variety of one-handed ranged options (rock, knife, sling, axe, javelin, ...). That said javelins might also be a one-handed melee option with an added throwing option. Let's call these "hurling spears" and imagine them to look like Roman pila or Zulu spears.

For shields, I think small ones like bucklers are much better for canopy mobility than large ones (round shields, kite shields, ...). Great shields for missile infantry might be a good idea for sieges and drawn out fights involving ranged units.

Armor wise I think metal would not be a great idea since due to stamina issues. While full plate armor is way less limiting than most people think (scaling climbing walls and doing handstands is quite possible), the three-dimensional nature and obvious opportunity for stealth in arboreal warfare make linen (gambesons are awesome), leather, wood, and bone armor quite appealing. If you need to limit the weight go for helmets and hand protection and some light body armor. The first two spots are vital and very prone to injury.

Let's conclude this with outfitting the perfect warrior

He´s got a metal helmet and metal gauntlets and the rest of his body is covered in linen armor reinforced with wood or bamboo and bones. There are lashes allowing easy conversion into a ghillie suit. Let´s give him a buckler and some kind of short sword (go for aesthetics you like, roman gladius or sparta, saxon-sword, falchion (anti cloth armor) or some kind of saber (*)). Additionally, he´ll need two belts to hold a back mounted, closable quiver for hurling-spears and for lashes holding a collection of throwing weapons or poison darts. These are disposable and kill using poisons. If poisons aren´t widely and cheaply available, either forget about these or upgrade to knives and throwing hatchets.

*"Have you seen these warriors from Hammerfell? They got curved swords. Big. Curved. Long........ SWORDS." [source: The Elder Scrolls: Skyrim]

While the first two commentors already had very good ideas, I'd like to add some more:

A double-ended halberd would be useful both for climbing in trees and for combat. It allows usage like a lance, like an axe (for damaging branches, too) and as a grappling hook to offset the balance of your opponent or to grab a branch for climbing or manipulating against an enemy. One side could be simpler (a wooden spear and a hook instead of a heavy axe and spear tip), so it's lighter and can better be thrown (which would only be done when someone is sure to be able to recover it, or in an ermergency when it would be too heavy to carry but might bring down one of the many approaching enemies).

A one-ended/normal but short version of a halberd could be the improved sword of the trees.

A pick-axe as used by mountain climbers would also work well in trees and could have a normal axe (and hook) on the back. It would be a good short-range weapon - the dagger of the trees.

A sword with a tip curved back could serve as a hook, would have more slashing options. Like the other weapons, it could use a leather band to allow hanging from it, so the fingers don't have to carry all the weight of an armed and armored fighter and/or the grip can stay optimised for fighting, not for climbing.

A rope can be used to tie down (elastic) branches and release them in different ways to harm approaching enemies. Or to help unroot a few trees between two forests so that enemies have to use the ground. It's also good for ambushes from the side (swinging) or from above, and, with a hook, also from below.

As you will be needing your arms more than your feet in the trees, the feet (I assume ape-like feet from the description) can also do more fighting - by attaching claws or pointy shoes with good grip on branches), by just adding some weight for more punch, and such.

Something as simple as a shovel can surprise enemies who, used to life in the trees, may not look for fox holes or soil missing around the roots of the trees they are on.

Not the answer you're looking for? Browse other questions tagged biology technology weapons medieval .

36
What would be the most effective melee weapon against heavily armored opponent?
38
What kind of realistic ranged weapons would be effective in spaceship combat?
8
How to adapt premodern warfare to area-of-effect magic?
17
What would be the best melee weapon(s) to emphasize arboreal mobility?
1
Could a steel cylinder punch through plate armor?
2
Best handheld melee weapons for dragons to use?