How can a team of shapeshifters communicate?

There is a group of people who can shapeshift. They send out hunting parties, scout teams, etc. In a circumstance where a group of ten people can look like ten different species (one human, one wolf, one demon antelope, etc.) is there any way they can communicate effectively across team members without having to change shape back to a species with greater vocalization ranges? Telepathy is excluded as an option.

The best answer would be that which allows for the most complex information to be shared in the most quick and efficient manner. For example, "scent glands" could feasibly be integrated into just about any form a person takes, and used to emit smells for communication, but one weakness as an answer is that it seems difficult if not impossible to convey more detailed information using this method. My benchmark for a useful method would be the feasibility of saying something basic, but with details, like: "two people, north, armed with spears, riding horses."

I should probably also clarify we are talking all generally "person-sized" animals here, not a three-inch-long mouse trying to communicate with a two-story-high dragon. The shapeshifters are limited in the extent that they can re-proportion their mass, and can only turn into physically possible animal species.

Edit: Some clarifications that came up in the comments.

For the purpose of this question, let's use humans as the baseline for the shapeshifters in their natural form, with all the assumptions inherent to them (possessing a developed verbal language, high intelligence, etc.) Any differences that suggest themselves as significant I will try to state and clarify as necessary.

The shapeshifters have some degree of adaptability, but have to start with an existing animal as a blueprint. basically they can't do anything not biologically practical. AKA you can start with a giant cat beast, then proceed to make the fur longer or change its color, change your build a bit, etc., but if it wouldn't be functional on the actual animal, it isn't going to work for you either, and may be prevented due to inbuilt shapeshifting failsafes. You probably can't add unbalanced tentacles to your giant cat, but you can likely make your tail longer.

There is an extent to which the shapeshifter's own inherent internal structure is required to be retained as well. For instance, the biological components (such as a shapeshifting-devoted internal organ, their brain, and their blood) related to the shape-shifting process can't be altered or eliminated. Nor can the shapeshifter's cells turn into anything not a natural organic part of their body. So, they can create hair (or fur), bone, skin, muscle, claws (or horns or tusks or scales) etc. etc. But they cannot turn a part of their body into metal, being non organic, or bark, since, despite being organic, it isn't made from the same sort of materials their natural body is (I think?). So while you might be able to shapeshift a bone exoskeleton or scales as natural armor when fighting, you couldn't turn your arm into a steel sword or your skin to iron.

You could have them shape shift into what they are trying to communicate, in the example you used, a shape shifter would turn into: a person, the number two, a compass pointing north, a spear and a horse.

However, this seems too comical and does not feel like it is in the spirit of what you are asking. Instead, i propose a more serious answer:

Perhaps one of the easiest forms of communication, it is simply a series of short stimuli and long stimuli. This could take the form of anything, the flashing of a light, the noise from the tapping on glass, even tapping on someone’s shoulder so they can feel it. With morse code you can say literally anything in the English language (or any language really, assuming you have sequences that correspond to all of the letters in its alphabet).

As Morse code takes a long time to communicate, you could instead have codes for words or phrases. You would need a list of common words that your shape shifters would communicate and attach codes to them. For example “... - - - ...” means SOS. In English, SOS is not a word, it is however an abbreviation of Save Our Souls, indicating someone is in danger and needs help.

In your case, you may have abbreviations such as SRD (sword), SPR (spear) MAN/MEN (person/people), HRS (horse) etc. If you then string several of these abbreviations together, you can communicate phrases quite quickly.

You may even have secret phrases communicated through abbreviations. For example, “XRT” may mean “Be alert, the king has left the castle, ready your archers” but there is no possible way you could have guessed that is what XRT meant, not in the same way you could guess SPR means Spear. Only those who were told what the code meant would understand it, preventing spies from intercepting it. 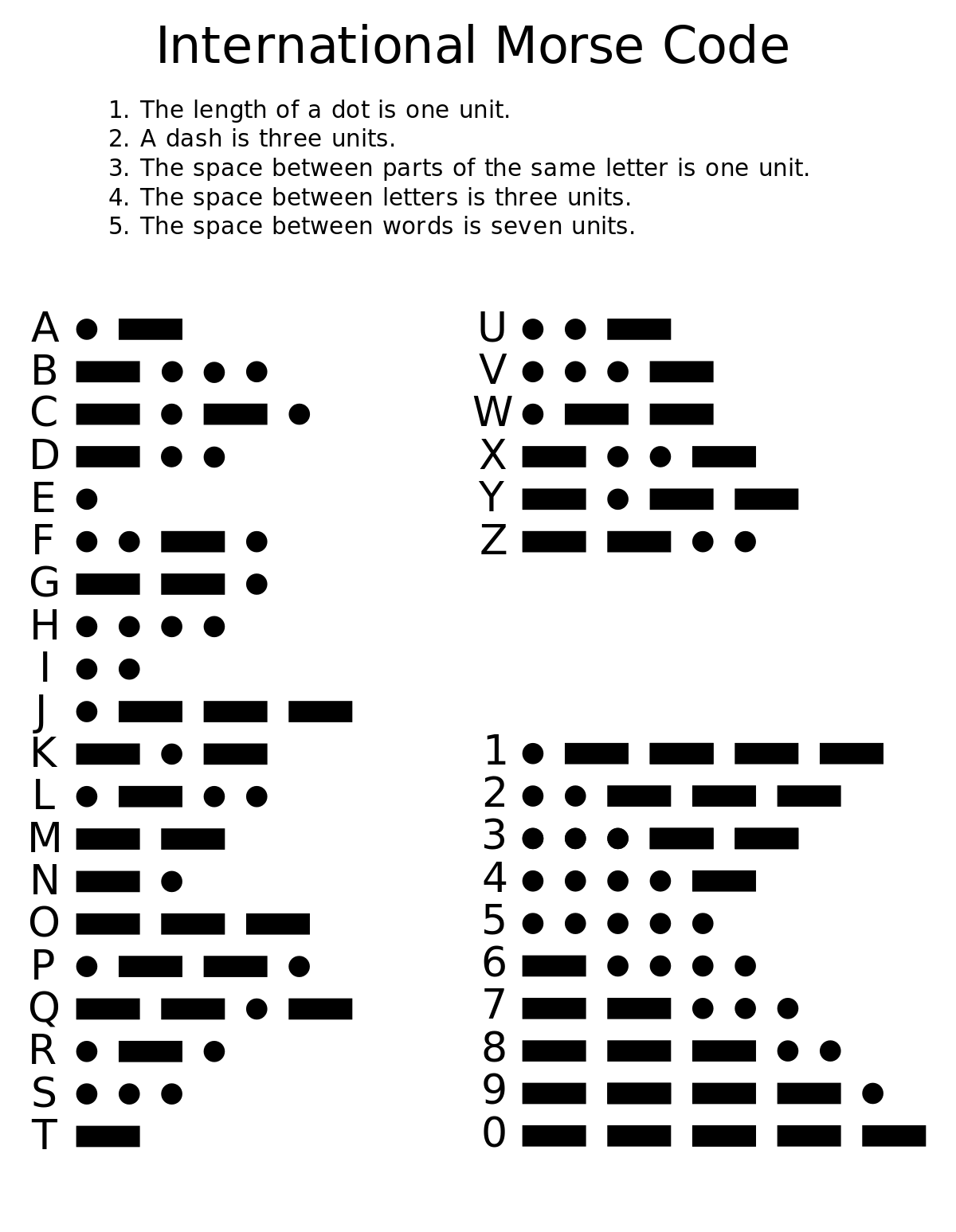 Here is a chart for International Morse Code so you can create your own abbreviations and know how to communicate them.

Albeit this is much more efficient in a liquid medium (so it's used by dolphins), an acceptable range might be achieved with an ultrasonic "clicking" organ and suitable ears (they needn't be too big).

This could also double as an active echo-location sonar, very useful for scouts.

Once the clicking mechanism is in place, you have a choice between a click-language or using clicks to code another language (this would be Morse code for example).

Just out of curiosity I've googled 'the minimal number of sounds in a language' and arrived at the Wikipedia page for Rotokas.

The Central dialect of Rotokas possesses one of the world's smallest phoneme inventories. (Only the Pirahã language has been claimed to have fewer.) The alphabet consists of twelve letters, representing eleven phonemes. Rotokas has a vowel-length distinction (that is, all vowels have a short and long counterpart) but otherwise lacks distinctive suprasegmental features such as contrastive tone or stress.

It means, that eleven distinct phonemes is enough for a functional language. If your shapeshifters are humanoid with developed vocal apparatus in their base form, they can communicate normally in this form. So, they need only a secondary, limited, purely functional code-like language for their shifted forms. They do not need even that many phonemes for their 'hunting cant'. I think, for the purpose of communicating in the shapeshifted form, they would be able to make do with a language with 5-6 distinct phonemes that is possible to pronounce by all the animal forms. They need only a small dictionary to quickly coordinate in the field, after all, not a developed language to communicate abstract terms - I'm thinking about something similar to the 'battle languages' in Dune.

(Here is an interesting older answer on the topic of animal speech).

They can shapeshift their skin to mimic the one of some octopi. In that way the skin can act as a screen, where messages can be displayed and read up to a certain distance. This would enable silent communication, which for certain types of mission is or paramount importance.

They can keep a human vocal system, so that they can still articulate speech while in another form.

Not the answer you're looking for? Browse other questions tagged creature-design communication shapeshifters .

19
What sounds would be common for both forms for a human/wolf shapeshifter?
17
What phonemes would a snouted animal (e.g. dog or cat) be able to pronounce?