Growing seaweeds on lakes and seas in tundra-like biome

Ok so I was thinking about a Viking-like civilization living in a tundra biome. So, other than raiding villages southwards or hunting wild beasts in the forest, could they cultivate seaweed for alternative sources of food in bodies of water? Can seaweed or any kind of water vegetation survive the harsh weather? If not, can there be a way where the ground beneath the water is hot enough for seaweed to grow? 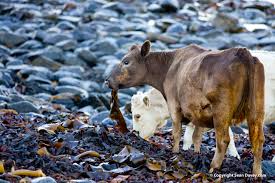 If I thought of it, I figured over a few thousand years people in Northern climates would have thought of it. Or observed their cows thinking of it and realized "I can help with that!". Indeed:

Seaweeds have been used to feed livestock for thousands of years and have been mentioned in Ancient Greece and in the Icelandic sagas. In Iceland, where long periods of fodder scarcity are common, seaweeds were grazed by sheep on the beaches, or fed to sheep, horses and cattle for 6–8 weeks of the year, and up to 18 weeks in some cases. Seaweeds were dried and stored in barns, and there are reports of seaweeds being preserved as silage and used as winter feedstuff for sheep and cattle in the early 1900s (Evans and Critchley, 2014). In the 19th and early 20th centuries, there were numerous reports of occasional or systematic use of seaweeds to feed livestock in France (Brittany), the Scottish islands and Scandinavia (Gotland, Norway, Finland), mostly to ruminants (including calves) and pigs (Sauvageau, 1920; Chapman and Chapman, 1980). Today, the Orkney sheep in the North Ronaldsay Islands (Northern Scotland) still graze a diet almost exclusively based on seaweeds (Hansen et al., 2003).

Your Northerners harvest seaweed. In the summer, the cows pull great seaweed rakes that move the bountiful weeds to the beach. They dry it in the midnight sun and use it for silage during the dark months. Humans eat the seaweed only as a garnish. Cows eat a lot of it and provide milk and meat.

When much of the arctic ice melted during the last ice age about 18,000 years ago, about 150 new seaweed species—capable of living at low water temperatures and surviving prolonged periods of darkness—claimed the arctic seafloor. Most of these species, endemic to the arctic, grow at higher rate at such cold conditions than in more tropical ones. Examples of seaweed families include Furcellaria, Ceratocolax, and Halosacciocolax. Although arctic seaweed serves mainly as refuge to underwater animals rather than food, when it makes its way to shore during low tides, it serves as food to land animals such as the arctic hare and the polar fox. (ref)

Other water vegetation grows in those climates as well. Such as red algae (a fungus, not a plant).

Despite cold temperatures, permafrost, and short growing seasons, vascular and nonvascular plants, algae, fungi, and lichens are found in both the Arctic and Antarctic regions.

Non water plants also grow in those extremely cold climates. But the water ones include both salt and fresh water plants and non-plants.

It's not about whether they will survive the harsh climate, or whether the people living there can cultivate them. What you want to know is, can they eat them? It's not enough to say that animals they hunt will eat them, because your goal is to get a wider variety of food. Though, as other answers suggest, you can use seaweed in part to feed animals you confine.

One 1953 book by A.E. Porsild, Edible Plants of the Arctic, discusses this question at length. Unfortunately, it does so with a sensibility one would not use today. But the plant/etc information is sound.

Several species of seaweed are eaten by Greenlanders and have recently been found to be an important source of ascorbic acid. (page 20)

A number of edible species of seaweed or marine algae occur along rocky shores of the arctic seas and several are used regularly, if mostly in times of scarcity, by the Eskimo. In Greenland, several species, including Rhodymenia palrnata and Laminaria spp. are eaten raw, dipped in boiling water or with seal oil. Rodahl (1950) estimated that 50 per cent of the vitamin C intake of the east Greenland Eskimo is derived from marine algae. (page 34)

So, yes, edible seaweed and other aquatic plants and plant-like organisms grow in the Tundra. They can be cultivated (like any seaweed can) and can form an important part of the human diet.

Not the answer you're looking for? Browse other questions tagged agriculture sea .

10
Corrosive oceans and seas - how would this affect our world?