Gastric acid as a weapon

The dragons in my fantasy world spit fluid from their mouths when threatened, which upon contact causes a burning sensation. I could have this liquid be standard venom, like modified saliva, but I wanted to shake things up a bit.

Could powerful stomach acid be spat as a means of defense and/or attack? My main concern is that it would be either too inefficient or too evolutionarily unlikely that another method of defense would be much more plausible to evolve.

I'm not aware of any duplicates to this question, apologies if I've missed one.

Could powerful stomach acid be spat as a means of defense and/or attack?

The stomach of any organism using acid as digestive liquid is protected against the action of said acid by a thick layer of mucus. The esophagus doesn't have the luxury of this layer, and is thus much more vulnerable to the action of the acid. In fact humans can get esophagus perforation in such cases.

So, if you want your dragon to throw up acid, you need to coat its esophagus with a thick layer of mucus.

However... attacking after lunch would mean emptying one's stomach, which would result in a energetic loss. It is reasonable as a mean of "better hungry and alive than full and dead" for a lesser animal, but for a might dragon might be a bit against the rule of cool.

Better would be to have your dragon develop some pockets where acid can be stored and used at necessity, without the need to throw away a well deserved meal.

Gastric acid (HCl) can be used as a means of defense or attack. Acid weapons are known in nature. Ants spray formic acid, for example. Some birds, vutlures for example, vomit as means of defense. A number of creatures evert their stomachs in order to clear out yucky things they've eaten.

In the literature, we find this example of gastric acid magic. 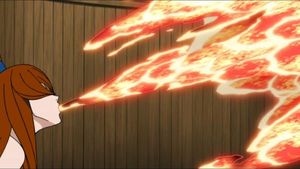 Yum. So yes, your dragons could certainly do this as well. If they're large beasts, the effects will probably be quite astonishing.

As others have stated, yes you could use stomach acid as a weapon. I would agree with L.Dutch though that they would likely have dedicated acid stacks rather than using the acid in their stomach for practical reasons. (Perhaps acid is produced and stored in these sacks, one tube leads to the stomach to fill the stomach with acid, another tube leads up towards the dragon’s head). You would need some kind of protection against the acid in the mouth, acid sacks and the tubes leading to the stomach and mouth.

If you wanted to get a bit fancier, rather than just having a tube in the dragon’s mouth that ejects the acid, you could have the tube run up to some fangs. This way you could have your dragon either spray out the acid or inject it into their prey.

Rather than just using plain old stomach acid, we might be able to do one better. By combining various acids, we can create one which has a negative PH level. You may be able to have two different acids produced and stored in separate sacks. When the dragon wants to use it as a weapon, some acid from each sack is ejected, causing them to mix. Now, i don’t know of this would be biologically possible as i’m not certain of the manufacturing process of super acids, however if it is you may want to consider this.

Instead of using acids, you may want to use enzymes. Whilst acids will burn someone they might not break down fats, which makes up a large portion of an animal’s body. However, if you instead fire out enzymes that break down a creatures body, it would likely cause the burning sensation you are after whilst also pre-digesting a dragon’s food to some degree.

Not the answer you're looking for? Browse other questions tagged science-based creature-design evolution dragons natural-defenses or ask your own question.

0
Biological adaptations necessary for weaponized (or otherwise made useful) reflux

22
Evolution of a creature that uses light as a weapon
6
Can hydrochloric acid and digestive enzymes cause a fire?
6
Life giving hydrochloric acid (HCl)?
8
What is the deadliest acid a hypothetical biological creature could utilize as a weapon?
12
How could an acid-cow make a barrier against acidic milk by synthesizing PTFE, and what would it line?
0
Octopus ink contains micro parasites that act as acid
3
Could a species evolve a defensive ability to excrete a super acid?
5
Is acid blood possible?