How could somersaulting worms evolve?

In Wayne Douglas Barlowe's classic book "Expedition" he has many strange creatures. One that intrigues the most is this one, the flipstick.

It has two feet on either side and uses them to flip through the air like a giant living, leaping slinkie. 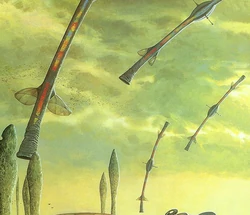 I know that Darwin IV is supposed to have dense air and low gravity, but there are so many other modes of locomotion on this planet I don't see how this one could have any space to evolve. Can you even think of how it originated?

They grow thick, colonies of these worms. Shoulder to shoulder. There is no space for a worm (or anything else) to get past its sister worms moving horizontally. Too many worms in the way.

When a worm wants to move, it has one option - up. It clears the top of the worm colony. Then as it descends it makes its leading edge a point and wedges its way back into the colony.

This mode would also work if the worms lived in tightly spaced forests, like bamboo forests.

If I am not mistaken there is a caterpillar, here on Earth, that uses the same escape mechanism: it flexes on both extremities and then springs away.

The effectiveness of an escape mechanism is often not only in the capability of taking the creature away from the menace, but also in disorienting the menace itself.

And a jumping-in-the-air type of worm is surely effective at disorienting an attacker: I mean, you are there in front of this thing, watering your mouth with the idea of a good meal, and before you blink your eyes it is springing up in the air to go god knows where!

If it is not only an escape mechanism, it can also be effective in the environment: you mention dense air and low gravity, this means that winds can be more effective in transporting things. So, as the worm jumps in the air, the wind will carry it further than just another form of motion would have, with the same energy expenditure.

It can originate by perfecting a simple bipedal motion, where front and hind foot are used alternatively to move the worm: a stronger arching can result in a jump.

Nature has beaten us to it. See the following video.

113
Would intelligent life evolve any other body plan than humanoid?
43
Anatomically correct Arachne
8
How to convincingly explain Kaiju
8
Anatomically Correct Triskelion
3
How could a marilith evolve?
6
How could an efficient respiratory system evolve for giant arthropods?
3
Lizalfos: Biologically Feasible?