Airships in RL are not very great in combat for various reasons. However in my setting there is Unobtanium that is repelled by gravity, instead of being attracted. A lump of Unobtanium can be used to suspend an identical mass of normal matter. Unobtanium is as dense as lead and as strong as titanium.

This makes airships much more practical, especially for warfare, since they can be built with a much more compact and durable structure, essentially becoming airborne ironclads. Normally the airships are controlled via aerodynamic surfaces and differential thrust from the propulsion, but this is less effective at low speed, and virtually useless at extreme altitudes with thinner air.

Given that they already have to carry such a large amount of Unobtanium, could this be used in Flywheels to provide control in such situations?

I know some spacecraft in RL have used flywheels, but I have no idea how feasible it would be for an atmospheric craft. Also, at what era of technology would such flywheels, and the associated control mechanisms, become feasible: pre-WW1, WW2, or later?

Possible, but saturation would be the main obstacle

Flywheel/gyroscope based attitude control changes the angular momentum of the air/spaceship by increasing or decreasing the speed of the wheel. That works fine for small changes back and forth, or keeping a certain stable attitude against small forces. But even in spacecraft the gyroscopes eventually reach maximum speed, at which point they can only exert force by slowing down, in the opposite direction of what has been needed most. This is corrected in spacecraft by slowing down the wheel and compensating the unwanted force with thrusters, using up fuel supply to de-saturate the gyroscopes.

In the atmosphere the main differences are that the forces exerted by wind on a ship are much greater, but drag also slows down any rotation eventually.

For airships there is good news and bad news. The bad is that trying to maintain attitude against constant aerodynamic forces (wind) will saturate the flywheels very quickly. This makes them useless as the primary attitude control system. They could be useful for a "quick" combat turn since the flywheel would be used both to start and stop turning resulting in little net change, but from there other controls would have to keep the ship in position.

Regarding the technological requirements: flywheels are not complicated, but the sheer size and mass of battleship-turning ones demand a high level of engineering skill to make them somewhat safe and reliable. Very strong supports and especially bearings would be needed. A jammed bearing would probably cause the wheel to tear the ship in half, while a damaged support would let the wheel run wild inside the hull. Neither sounds very attractive, unless you are the enemy.

My guess is that WW2-era engineering would be up to the task. A whole battery of smaller flywheels might be achievable with late WW1 engineering, but if they're not close to the ship's center of mass, they would make the ship harder to turn.

While not entirely analogous, many WWI era aircraft were powered by "rotary radial" engines. In order to be lightweight, they were air cooled, but in order to ensure cooling at all speeds, they were arranged so the crankshaft was fixed to the firewall and the rotating cylinders spun (the propeller was attached to the engine block). 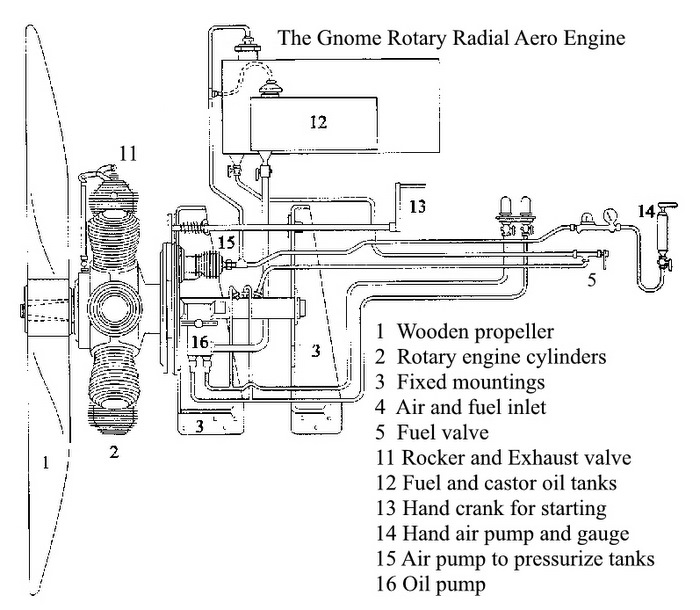 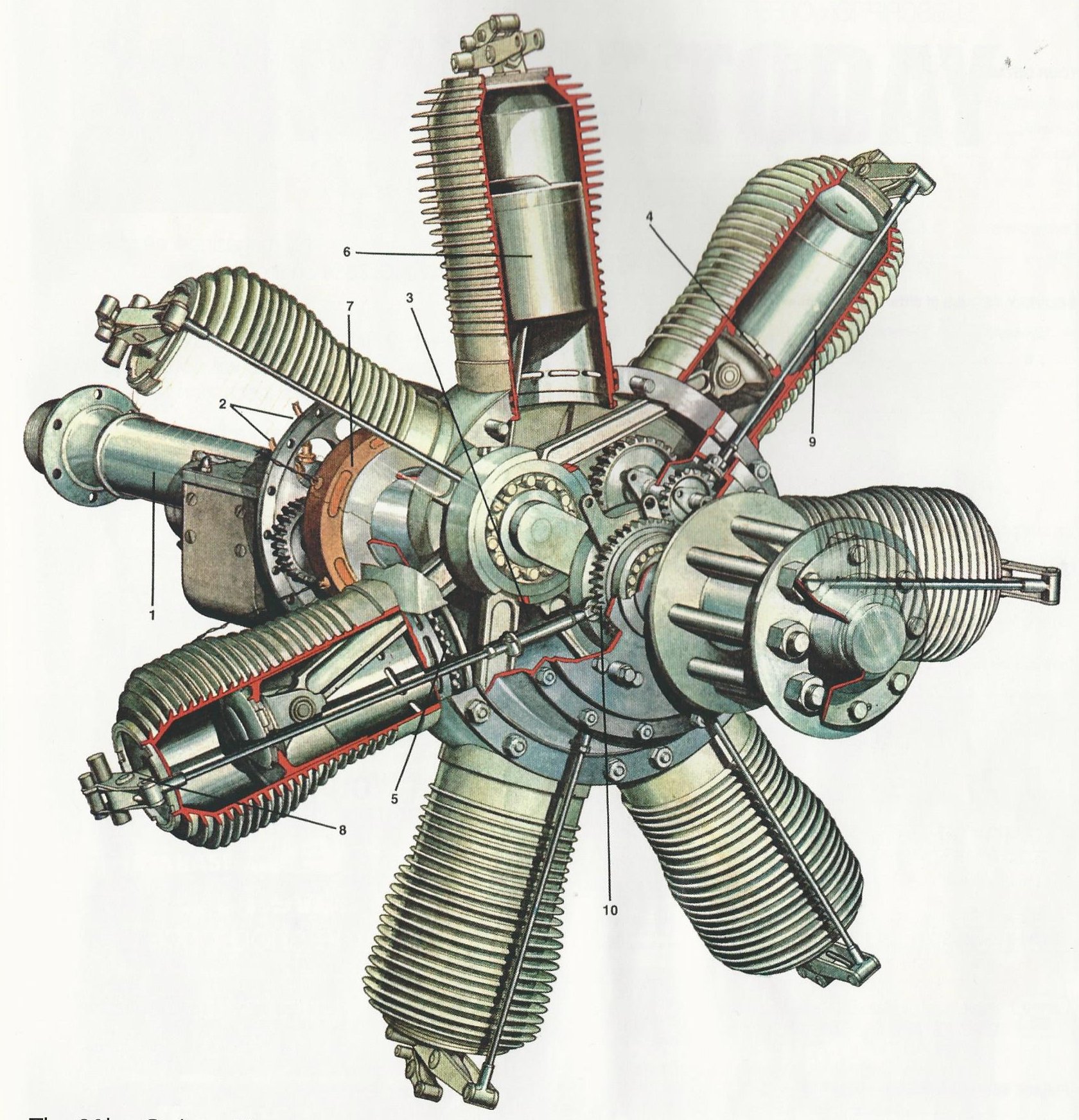 This had the strange and interesting property of essentially attaching a large gyroscope to the front of the airplane. Fighter pilots learned to utilize this effect, Sopwith Camel pilots could reputedly make amazingly tight turns by "slapping" the stick in the same direction as the engine was spinning, getting inside the enemy turning radius. 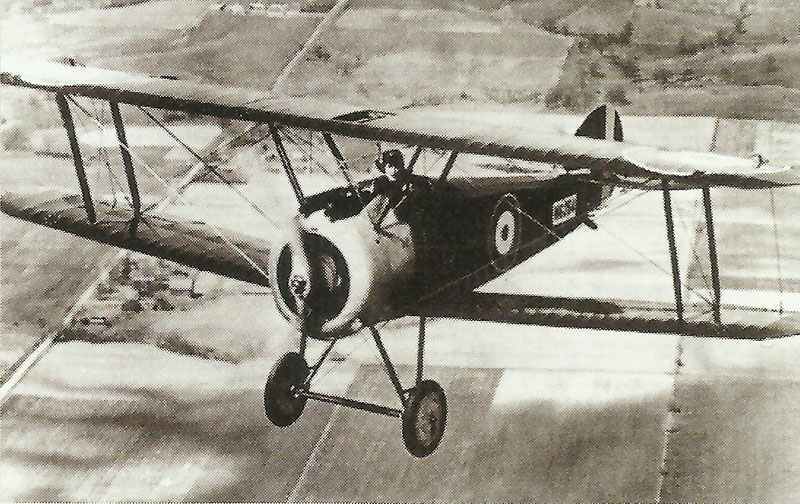 Now an unobtanium airship with these types of engines might conceivably use this effect, especially in multi engine ships, if the engines are set for "handed" rotations. In effect, the pilot might simply throttle one side up and the other side down not just for differential thrust, but also to use the gyroscopic rotation of the engines to assist the turn. This would make your airships resemble some of the more exotic creations of Myazaki's movies. 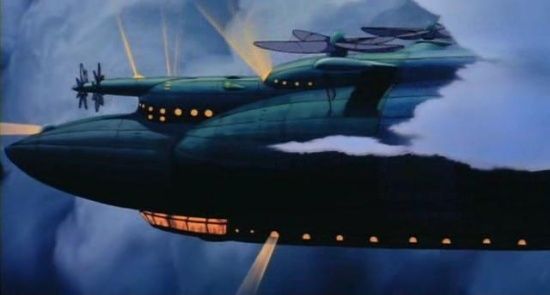 Myazaki airship from "Castle in the Sky"

So if you incorporate rotary radial engines as your power source, you can utilize the properties of the engines themselves in order to get gyroscopic effect.

Not the answer you're looking for? Browse other questions tagged reality-check technology airships aircraft .

6
High-Altitude Life?
11
Airship weapons, gliders
31
Could a WWI biplane fly if it were dropped from a high altitude instead of using a runway?
2
Living on a high altitude floating city in a fantasy world
15
Smallest possible size for a manned airship
14
How to correct aim in aerial airship combat?
2
High-Altitude Asteroid Impact
4
How would a fixed altitude magical Airship be propelled?
18
Air-traffic control for medieval airships
10
Where (altitude, cloud type, etc.?) is it most safe vs. least safe for an airship to collect rainwater?