Ball lightning projection as an alternative to plasma weaponry

Plasma weaponry is a staple of science fiction, but is often objected to on the basis that it expands too readily. There's no way to effectively deliver it to a target without spending a lot of effort of containment.

This is inspired by this question which describes two directed energy weapon systems, with the second one originally labeled plasma, then struck through and labeled ball lightning, silicon vapor theory.

The part I'm most interested in is how you'd actually create and throw the ball lightning. Firearms use a chamber and barrel, lasers use a lasing medium and lenses, railguns use capacitors and, well, rails. If I was building an infantry weapon that fires ball lightning, what would its main mechanical parts be?

A railgun firing a plasmak (ball lightning) that is. Since the plasma is electrically conductive you can use it as both the armature and projectile. Muzzle velocity is insanely high, the projectile hits pretty hard just due to the speed, and as the plasmak impacts an object and is destroyed it releases a localized EMP - so the Star Wars ion cannon was actually not that far off. The big drawback is that the ball lightning disintegrates in a pathetically short distance in atmosphere, the structure is too unstable. In space however, you could get more respectable range out of this type of weapon.

Use a rail gun where one rail is an inner cone and the other rail is the outer cone. A donut of plasma between the cones acts as the armature/projectile. As it's forced out, it forms a stable(ish) structure called a field-reversed configuration which works exactly like a smoke ring - it's rotating about it's axis and rotating so that the inside of the ring moves forward and around to become the outside of the ring. This semi-stable plasma ball is ball lightning.

General Fusion's Plasma Injectors (the largest in the world) use the same type of design. Definitely check out this paper as it breaks down the basic design. Their research library is full of all kinds of cool stuff.

This one is a bit different, but is also a type of plasma weapon. The US Army used a pulsed laser to create an ionized path in the air and paired it with a tesla coil. Lightning follows the path of least resistance through the air, so paint a target with the laser then blast it with lightning!

The Gungan method to launch ball lightning, or "boomas", is via catapult. 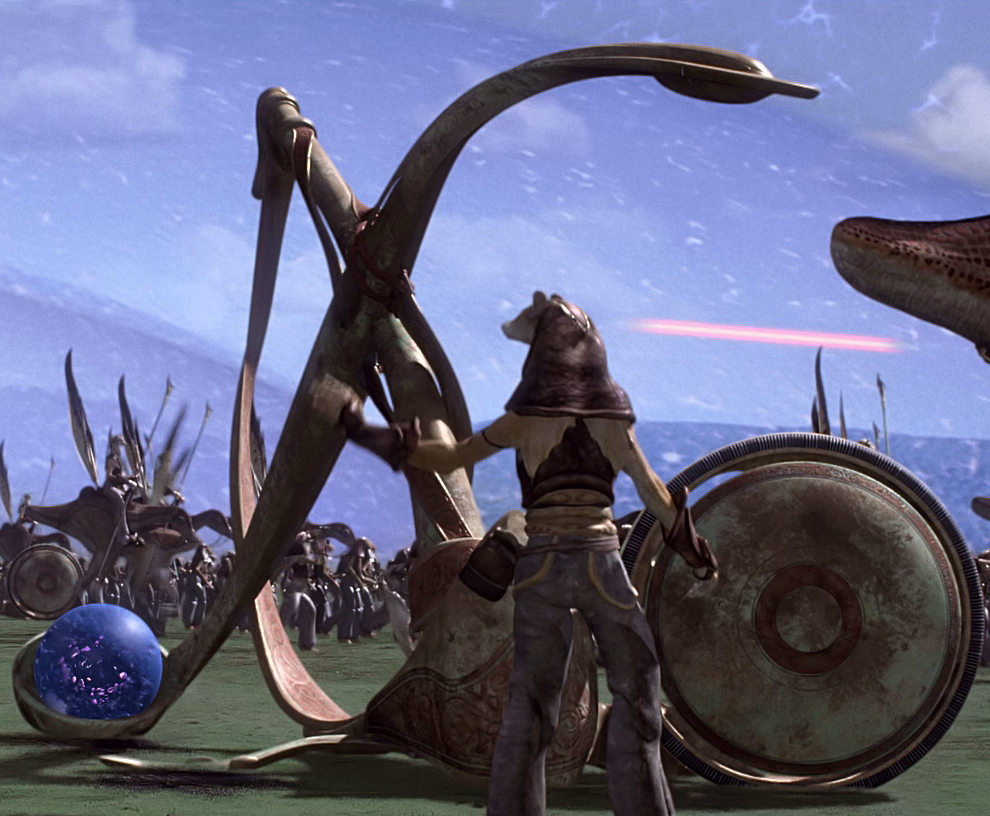 The boomas seem to be ball lightning, plus goo.

The booma consisted of blue plasma from the depths of Naboo's oceanic core, pressurized and forced into a shell that would burst if thrown hard enough. It was very effective against droids and vehicles because the plasma was electrified, and seemed to have the properties of an EMP weapon. It could also burn biological material and leave a trail of plasma "goo" upon impact.