A pair of similar celestial bodies coming near each other

In my conworld I have two moons (they could be planets if desired as long as they can stay 'close' to a larger nearby body) of habitable size. I want to reality-check and provide an explanation for why they would have certain properties.

For my purposes I would like these two bodies to have a couple interesting properties:

While I want the body to be large enough to be habitable, I would like it to have, in essence, two sides - like a coin.

Obviously a coin-shaped planetary body would be far too extreme, but something like Iapetus with a moderately more pronounced equatorial ridge would effectively divide the body into two regions.

The way I picture this, at some point the bodies get much closer to each other than usual. This should be visible to the naked eye and a major event, but should be somewhat uncommon (period of at least a 'year'). During this event travel between the two bodies should be much easier than outside of the event (e.g. no need to maintain orbital velocity, just get close enough for the other body's gravity to capture you).

I want to know how long this 'approach event' could last, and what the distance and relative speed could be. Obviously if they get too close then their gravities will rip them apart and they will cease to be habitable. Obviously if their relative speed is too slow then they will get too close and either collide or have gravity rip them apart - again ruining habitability.

Just how close, how slow, and for how long can such an approach be made. How cheap can inter-body travel be during this period? Could there be time and proximity enough for a space-elevator-like situation?

I'd like to know how such a celestial configuration could be possible and what unforseen consequences it could have.

I'm not going to answer your discworld question here (it seems better suited to a separate question), but I can perhaps suggest something for your "approach event".

Behold, the Saturnian moons of Janus and Epimetheus. 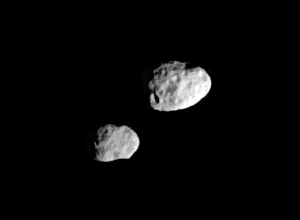 They are unique in the solar system in that they are co-orbital moons. Their orbital radii are very close, and periodically... about every 4 years or so, coming as close as 10000km of each other and swap orbits. The slightly more outer-orbiting moon becomes the inner, and via versa. Then they drift apart until their next approach. I'm not sure right now how long the approach is, but given the period of the system I suspect that it lasts weeks, at the very least. I'll see if I can find any more detail another time.

10000km is practically close enough to kiss, in astronomical terms. That's a third of the distance from the Earth's surface to geosynchronous orbit. I suspect that not all approaches will be that close, but there's some scope for handwaving and fudge-factoring when you're the author.

How you calculate the minimum approach distance I'm not entirely sure, but is probably related to the sizes of the bodies in question (Janus and Epimetheus are small) and the size of the object they are orbiting. Larger worlds will have larger minimum approach distances. Similarly, the period of the cycle will almost certainly get larger too. The asteroid 3753 Cruithne is co-orbital with the earth, but the cycle length is 770 years and the closest approach is over 12 million km. This probably means that you're limited to gas-giant moons for your scenario.

Now, flying from A to B will not be as simple as "no need to maintain orbital velocity, just get close enough for the other body's gravity to capture you", I'm afraid... you'll still have to escape your local gravity well, and avoid being smashed by your destination's well, and both those operations will need a rocket of the appropriate size. If both worlds had space elevators though, it could easily be a very low power and quick transfer.

The two moons (or planets) may have very close orbits and swap orbits every time they get close to each others, like the Saturnian moons Epimetheus and Janus:

Saturn is surrounded by a crowded family of rings and moons, and two of those moons -- Epimetheus and Janus -- orbit Saturn so close together that it seems as though their different orbital speeds should make them crash into each other. But due to the complex interplay of their mutual gravitational attraction and their very slightly different distances from Saturn, they never get closer than about 15,000 kilometers (9,000 miles) from each other. Instead of crashing, they exchange orbital positions in a gravitational do-si-do once every four years, in a dance that takes 100 days to play out.

15,000 km distance should be seen in the context of the moons' size. Epimetheus and Janus are small, irregularly-shaped moons with diameters of about 120 and 180 kilometers, compared to the Earth's 12,700 km radius. If the bodies get too close, tidal waves will rip them apart. Even so, the Earth/Moon Roche Limit (how close they can get without this happening) is only 9,500 km, so it is feasible to have your moons/planets get this close.

Your moons could have slighly flattened shapes if they once rotated faster, but have since slowed down (possibly because of tidal forces during transitions. This would leave broad, circular mountain range around the equators, with oceans around the poles. If the moons have lower gravity than the Earth, the mountain ranges could be far taller than Mount Everest. Olympus Mons on Mars e.g. rises to 26 km above the surrounding plain; something that would not be possible on Earth without the mountain collapsing under its wn weight. Lower gravity however also implies a less steep pressure gradient when going up in the atmosphere, so the air might not be much thinner than on Everest. Still, even at Everest air pressure, it would be very diffult to transit the range on foot. You might also need something akin to stratospheric planes or balloons to cross the range through the air. Extreme cold might also be an issue. Still, any technology that would allow travelling to the neighbour moon would also make it possible (and far easier) to travel to the flip side of the moon. One possibility is that the mountain range is heavily volcanic (as the range slowly collapses under its own weight), making their tops eternally obscured by volcanic smoke. This would however probably have a powerful effect on the climate of the entire moon.

Not the answer you're looking for? Browse other questions tagged planets space space-travel moons habitability .

5
Magnetic Celestial Bodies in Orbit
19
How to determine one's position in space?
23
Realistic sky of an Earth-like moon orbiting a gas giant (length of day and size of celestial bodies)
20
At what minimal technological level would the inhabitants of a binary planet system need to be to communicate with each other effectively?
5
How would two generational ships traveling at point eight cee communicate with each other?
7
Determining this horseshoe/co-orbital moon's possible orbital periods
2
The major effects on the habitability of exomoons orbiting this Brown Dwarf
7
Can a rogue planet have a habitable surface due to geothermal heat?
13
What is the largest possible appearance of a celestial body in the sky?
1
Two celestial bodies tidal locked - not with the sun