I've been playing with the idea of living nests for insects for a while now to help populate my worlds. The idea is that they don't build a static nest out of wood pulp and other material but have a literal living and breathing creature that they call their home in a symbiotic relationship. This isn't a simple cooperation where one creature allows the nest to be build on top of him for mutual protection, this is a full-blown "we share DNA" type of cooperation.

There's several things that I would like to know. Ignoring any evolutionary processes to get there, there's things like shape, who would ideally nourish who + how they do that, procreation, keeping the hive together and more.

This question focuses on the optimal shape, based on existing creatures right now. Such a cooperation would have some advantages and disadvantages. Having a warm nest that can find food and protect part of the hive during winter is great and can give a big advantage over hibernating queens that need to find a spot and build up their numbers. On the other hand having to help sustain this living and breathing hive is going to take a lot more work and the creature itself needs the space for the hive to function.

With rambling half-fluff out of the way, for an answer I'm looking for the following factors:

Tortoises are protected by a thick shell, which would also protect a small hive. While this would require an expansion of the tortoise's shell it's not implausible for the turtle to be a bit underdeveloped for the shell size.

Even though tortoises are slow, its escort of insects is fast enough to kill flighty prey if carnivorous, can reach very tall fruits if herbivorous, or both if omnivorous.

Well, it's probably preferable for the insects themselves to have their own digestive tracts. If the hive dies then the insects can continue to survive until they find/grow/morph another hive. However, feeding the hive directly would require a lot of effort on the part of the swarm. Also during winter or other weather (like storms) the hive may be more mobile than the swarm.

The swarm would obviously lay eggs in the spaces in the hive where they rest. Simple and effective.

Keeping the hive together

If insects can navigate back to the starting location, they could follow a scent trail left by the hive. There are already sun-based mechanisms used by bees for navigating - return to starting point is a solved problem for insects.

There are already insects that live inside the fur of sloths:

A sloth moth is a coprophagous moth which has evolved to exclusively inhabit the fur of sloths (...)

But I think you want eusocial insects such as bees, right?

Imagine that insteaf of moths, sloths were home to wasps. Those [refacted due to be nice policy] are vicious and, unlike bees, are comfortable with spartan, minimalistic nests (when they don't use some living bug as nest + food).

The sloth will provide shelter, warmth, home mobility, and love (which wasps don't have on their own).

Wasps will pay their rent by stinging anyone and anything that threatens the sloth. Any few species that still hunt sloths will evolve to not hunt them anymore. I have never been stung by a wasp by I've been told it is extremely painful. In fact, some species have their stings on levels three and four of the Schmidt sting pain index:

Schmidt describes the sting of the warrior wasp as "Torture. You are chained in the flow of an active volcano. Why did I start this list?"

There is also risk of death to the allergic.

I think a land-based coral-like creature (might also be a plant) would work well as an symbiotic insect hive.

Similarly to corals this (stationary) creature lives of organic matter, which it gathers from its surroundings: using a paralyzing venom against (small) creatures that come near it, it can obtain food. It might also be able to digest other plants, using vines similar to poison ivy, and of course being poisonous is also a good way to prevent being eaten by bigger animals.

The insects using this creature as a hive are of course immune to the paralysing venome (as clownfish are immune to sea annemones), which allows them to hide and nest within the plant.

This tendency to nest in the plant over time evolved into a full blown symbiotic relationship:

While you said you'll ignore evolution of the hive / symbiosis for now, I think it's pretty clear how it might have worked here:

Some kind of sponge-like creature 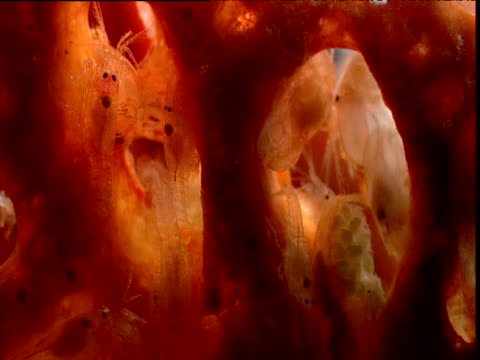 This is Synalpheus regalis, the world's only eusocial crustacean. Colonies of this snapping shrimp spends their entire lives living and feeding inside their host nests: sponges.

Sponges present a naturally convoluted and tunnel-filled structure which serves as a ready made equivalent to an ant or termite nest. Suppose your world has a creature much like a sponge, perhaps even more appropriate for a network of passageways, only it breathes air and is fully terrestrial. Your insects could use these as living nests.

For the other end of the symbiosis, consider that the insects will defecate and die inside the sponge frequently. This organic matter would be absorbed by the host nest and provide welcome nutrition.

I believe Renan has the right example for you. Sloths are basically a mini-ecosystem. The flies that inhabit the sloths live off of the algae that live in the hair of the sloths. The flies help to fertilize the algae with their feces as I recall. There is a positive feedback loop of sorts. You'll need an organism that provides an ecosystem that sustains multiple species that support each other with the host being the keystone species.

You have an organism with micro-environments temperature differentials lots of nooks and crannies (spaces to hide) hence lots of diverse habitats.

Not the answer you're looking for? Browse other questions tagged biology bio-mechanics insects hive .

7
A different kind of atmosphere, what gasses other than oxygen could be used by alien life forms?
9
The Science of the Marsupilami
3
Would human body adaption to sub-zero temperatures be actually beneficial in arctic climates?
29
Wasp hives in a walking corpse. Why would wasps do this?
7
Foraging behavior of a forest slime
72
How can a hive mind secretly monetize its special ability to make lots of money?
11
Why do I still want insect screens?
5
How a living prosthetic would work?