Huldra are forest creatures from Scandinavian folklore, best known for their seductive natures. They are frequently depicted as beautiful women, with the additional traits of a cow-like tail and occasionally a hole in their backs, like that of a rotting log.

As we are starting with a human base, I would expect the addition of a tail to be easy enough to explain, as it is often represented with the same skin tone and hair color as on other parts of the body. The hole in their backs, however, is something far more difficult to justify. The hole is often a true cavity, not unlike one found in a hollow oak tree or rotten log, which brings up questions about the placement of internal organs and other supportive structures.

As one legend states that huldras are unwashed and hidden children of Eve, consider these creatures to be related to or have descended from humans on some level. 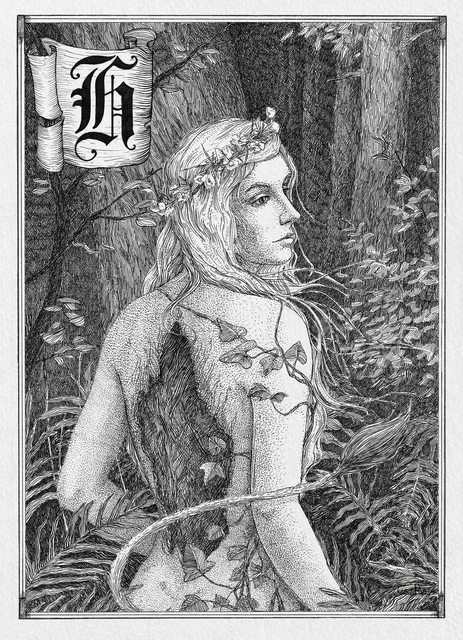 Huldra by CoalRye on DeviantArt

Huldras are a sub-species of homo that developed when the first humans populated Europe and Scandinavia. Several near-extinction events lead to genetical bottlenecks and inbreeding, which in turn lead to several genetically mutations.

The most remarkable mutations are the tails (which grew due to a reactivation of dormant genes) and a severe case of spina bifida, the open spine.

Usually natural selection would eliminate babies with defects that impede their development and life too much, but in case of the Huldras, another mutation saved their lives. Abnormal bone growth in some Huldras managed to encase the vulnerable spinal cord in a protective layer of bony protrusions, not unlike tiny ribs. The individuals with this double mutation managed to survive, while individuals with open spina bifida eventually went extinct.

Over several generations, the gap in the spine caused by spina bifida grew bigger and bigger, the bony protusions gradually taking on the original shape of vertabrae on each side and forming an elongated hole from about the shoulder blades down to above the hips. The skin coating the inside of this hole is very thin and pervaded by numerous blood vessels that result in a dark, flushed color that gives it the optical illusion of being a deep cavity. This illusion is further aided by the bony spine protrusions forming an irregular border to the spine gap.

As the spine is pretty central to the human body plan, i'm not going to explain it away, in fact they have two. Huldras are extreme cases of conjoined twins. Double everything but arms and legs. Yet one twin is expressed internally and dies at the onset of puberty. The resulting necrosis is not survivable but by the complete removal of the second twin. The resultant cavity is lined by skin, but often stuffed with rags and herbs to prevent infestation.

The hole in the back is usually (only?) mentioned as a final sign to a previously unsuspecting victim that the beautiful, seductive woman in fact was a Huldra.

(A lone wanderer sees this beautiful woman, follows her deeper and deeper into the woods. The last sight he catches of her is the hollow back as she dissapears with a laughter leaving him lost far from the trail.)

So the hole doesn't really need to be a true cavity, it merely needs to look that way. It could in fact be a patch of dark hair or scales down the back, giving an optical illusion of a rotten cavity.

Not the answer you're looking for? Browse other questions tagged science-based reality-check creature-design fantasy-races .